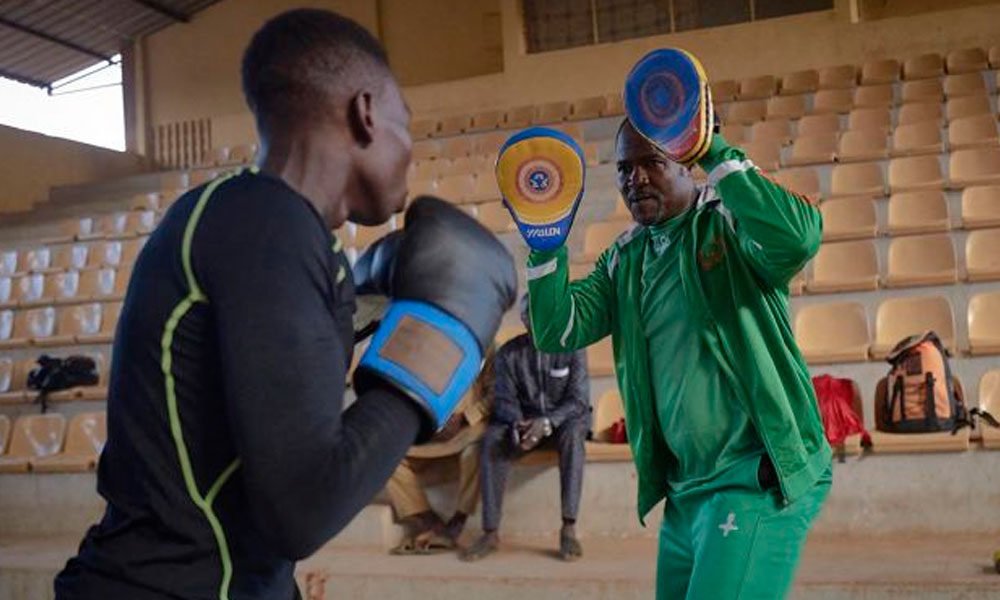 At the foot of the ring, in a tracksuit with the colors of Niger, Abdoul Aziz Ousseini, alias ‘Aziz’, a former heavyweight boxing champion, gives instructions to his young pupils torn from the street, at the boxing club of the capital Niamey .

A dozen young people put on their gloves and begin to warm up. Nearby, other amateur fighters punch a huge tire suspended in the air held by ropes.

Near his 50th birthday, Aziz, with an imposing size, a ten-time Nigerian champion weighing more than 100 kilos, has become a coach of future talents and also carries out a social action with these disadvantaged young people.

The man who emerged from embryonic boxing in Niger in 1998 and whose idol is called Mike Tyson, teaches altruistic boxing to young people on the street.

“They are little abandoned and they used drugs everywhere, so on Saturdays and Sundays I sacrifice my time for them,” he says.

«The coach teaches us boxing (…) it is better to learn to box than to practice banditry in the street. Later on we will teach others », smiles Moussa Issa, a regular at training sessions.

“A champion will emerge from among them,” says Aziz convinced.

In 2012 he had already piloted a government program supported by the United States and Spain, from which forty of these young people benefited in two popular neighborhoods of Niamey.

Nowadays, although the former champion may count on some local sponsors, he also offers private boxing lessons to Western expats to finance his activities.

“Instead of giving me money, it happens to me that I ask them to bring me quality boxing equipment from their vacations in Europe,” says Aziz, who works at a UN agency in Niamey.

You can also read:  CMB, AMB and FIB study adding half a point to the cards

Under the baton of Jean-Marc Perono, former coach of two world champions – the French Hacine Cherifi and Fabrice Tiozzo – he boasts a record of five victories in five fights.

“Like my idol Tyson, I dominate the ring!” He brags from his 188 centimeters tall, displaying his many gold medals.

“Aziz’s successes gave boxing a new wind when it was barely shining,” says a good boxing connoisseur from the African country.

Retired from the ring since 2019 “due to weight and age”, and “due to lack of direction” after the death of his mentor, he focuses the rest of his energy on the emergence of “young talents.”

Because beyond his investment in street kids, he’s also dedicated to six aspiring pros who dream of boxing for a living.

“Sometimes they are the ones who come to pick me up at my house” for training, he says, happy for that enthusiasm.

You can also read:  Wilder retains the heavy scepter when giving a severe punishment to the French Duhaupas

And the work is already paying off: Moussa Sahabi, 22, has won three West African champion titles of 52-54 and 56 kilos from the HBE International Training Organization.

«Before meeting Abdoul Aziz, I was very discouraged with boxing, but he woke me up! For my first belt he pawned his car so that I could participate in the competition, “says Sahabi.

Sahabi dreams of following in the footsteps of Issaka Daboré, the first Olympic medalist in the history of Nigerian sport to win bronze in Munich in 1972.

The young champion wanted to be in the Tokyo 2020 Olympic Games, but was unable to compete in the qualifying matches due to travel restrictions imposed due to Covid-19.

“Sahabi can go beyond where my dreams stopped,” predicts Aziz. AFP (HN)