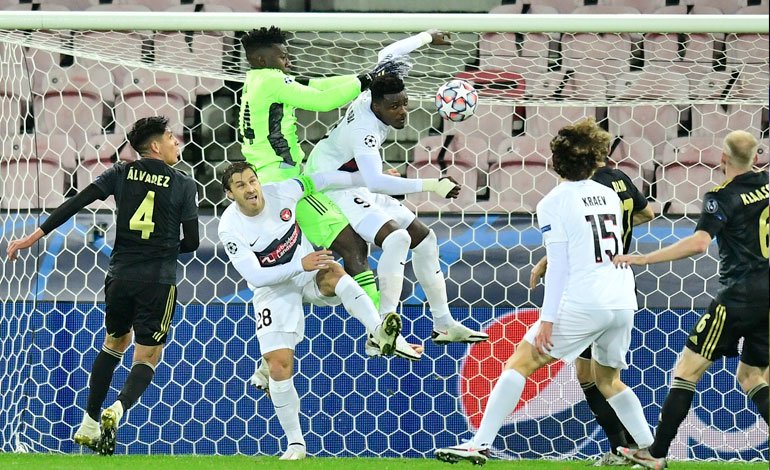 Goals from Dusan Tadic and Antony dos Santos in the first half and a very good performance from Argentine Lisandro Martínez helped Ajax to beat Midtjylland (1-2) and stay alive in the Champions League.

The first victory of the team from Amsterdam in the top European competition was suffered, with a fast, frantic first half, of comings and goings of two teams that rarely raffled the ball. Ajax’s two early goals did not cause Midtjylland to drop their heads and the Danish side scored one in the first half.

The second half was quieter, as Brian Priske’s men were more imprecise and Ajax took control of the game, managing to keep the 1-2 until the end. Erik ten Hag put in Edson Álvarez in the 60th minute, in what was the Mexican’s debut in the Champions League this season, while Lisandro Martínez was one of the best of his team. The Argentine not only firmly stopped more than one Midtjylland attack, but also participated in the construction of the game. The Brazilian Dos Santos for his part gave dynamism to Ajax’s attack and left many quality details.

The 4-3-3 formation that the Dutch squad presented in Denmark turned around compared to what was expected 24 hours earlier, when it was learned that up to eleven players were infected with covid-19. Most cases turned out to be false positives and Erik ten Hag eventually fielded the likes of goalkeeper André Onana, forward Dusan Tadic and midfielder Ryan Gravenberch, all of whom had not traveled with the team’s initial expedition yesterday.

You can also read:  Premier League footballers will continue to put their knees on the ground

The Danish champion, for his part, is practically out of the Champions League, as he does not add any points in the first three games. He presented a 4-2-3-1 with goalkeeper Mikkel Andersen under the sticks, as Jesper Hansen, who was already out against Liverpool, was not fit enough.

Midtjylland’s defense came out completely asleep and Ajax’s first goal came at 54 seconds. Jens-Lys CFIT let Dusan Tadic slip almost into the box and passed it to Dos Santos, who was waiting on the other side. The former Sao Paulo player, halfway around and with his left foot, made a low shot that caught the goalkeeper off foot and ended up in the back of the net.

The game was vertical, with comings and goings from both teams, and Ajax’s pressure took effect causing a second unforced error from Midtjylland. In an attack by Ten Hag’s men, Paulinho gave the ball to Andersen with his foot, who picked it up with his hands and the referee whistled an indirect free kick at the edge of the small area. Tadic made no mistake and hit it at the near post despite the Danes putting up a human barrier on the goal line.

It seemed that it was going to be a walk for Ajax, because the Tadic-Dos Santos duo was scary every time they approached. Nothing is further from reality. In a quick attack, Anders Dreyer planted himself in front of Martínez and Nicolás Tagliafico and his splendid shot to the right made Onana’s lunge useless.

Midtjylland deserved to level the score. Dreyer was about to make the second on two occasions, one of them very clear, but the first was cleared by the Cameroonian goalkeeper and the other went wide. Sviatchenko also tried it with a header without success, in a set piece play.

You can also read:  Pochettino opens the doors of PSG to Messi

A masterful drive by central defender Alexander Scholz, who advanced tens of meters dribbling past Ajax players, ended with a strong shot by Awer Mabil in the 31st minute, repelled again by Onana.

Harassing and taking down Brian Priske’s men did not result in a goal and, little by little, the Dutch defense recomposed itself. Perr Schuurs stood firm and Martínez stopped powerful attacks from the locals with ball recoveries included. Gravenberch, one of the jewels of the Amsterdam quarry, left technical details worthy of a couple of repetitions.

The entrance of Davy Klaassen after the break gave Ajax solidity, which put on the championship suit and regained possession of the ball. The rain made the game even faster at the expense of Midtjylland’s precision. They tried it above all from the left and with long balls, but without creating a real danger.

Ten Hag took Schuurs off the field, who had a yellow card, and put on Edson Álvarez, in what was the Mexican’s debut in the Champions League this season. The Mexican was good and prevailed in the aerial duels he played.

The VAR annulled for offside a beautiful goal in the 67th minute by Dos Santos, preceded by a control worthy of the Brazilian school. Dreyer, the author of the goal in the first half, was totally diluted in the second and went to the bench fifteen minutes from the end. His replacement, Bozhidar Kraev, also did not appear.

You can also read:  Premier League makes changes due to Covid-19

In the final minutes, Midtjylland took to the hill with more heart than head and Ajax just defended the result. The closest the Danes came to equalizing was Evander’s fine free kick that went inside-out and Onana sent for a corner.

With tonight’s results, Ajax is tied with Atalanta on four points in group D, Liverpool is unmarked as leader with nine and Midtjylland is bottom with zero points.

The Danish team says goodbye almost definitively to its chances of surprising and qualifying for the round of 16 and will fight for third place in the group stage, which gives access to the Europa League.

Incidents: match corresponding to the third day of group D of the Champions League played at the Arena Herning, in the Danish city of Herning. The Ajax footballers played with a black crape on their arms in tribute to Johan Cruyff’s assistant Tonny Bruins, who died last Monday at the age of 73. EFE (hn).