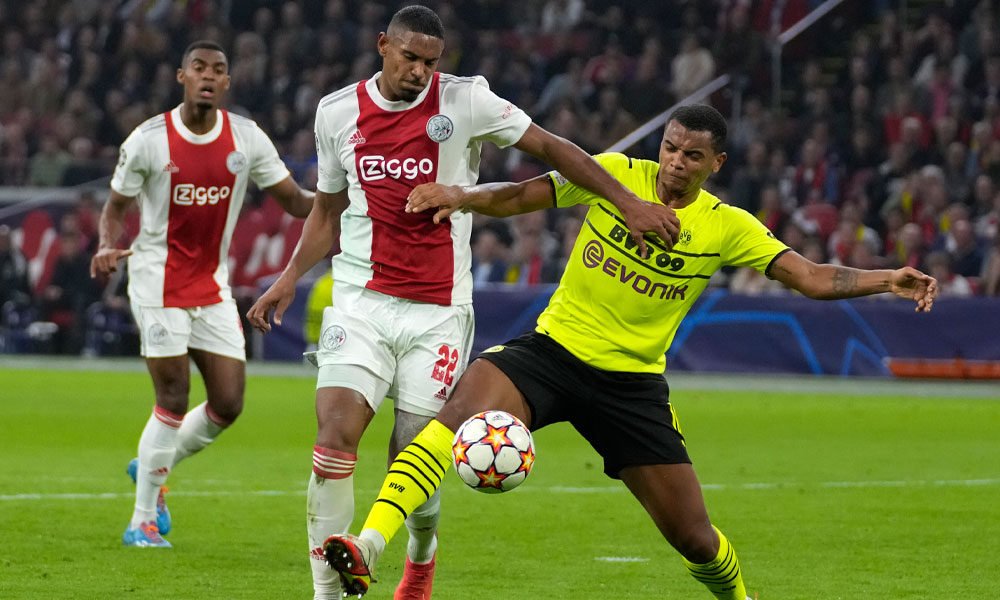 Ajax became the first team to qualify in Group C of the Champions League thanks to a controversial comeback (1-3) against Borussia Dortmund, who finished second with the same points as Sporting Lisbon.

The Dutch side started losing due to a Marco Reus penalty goal, but took advantage of the controversial expulsion of Mats Hummels in the first half and turned the game around in the final twenty minutes.

Borrusia Dortmund came out strong, hurt by the 4-0 defeat suffered two weeks ago at the Johan Cruyff Arena and wanting revenge. Bellinghan put the Ajax defense in trouble several times, and a slip by Argentine Lisandro Martínez left Thorgan Hazard alone in front of the Ajax goalkeeper, but Pasveer removed the ball with his hand.

After about ten minutes of local dominance, Ajax started engines and began to haunt the opposite area. A failure of the German defense led to a shot from Berghuis that went wide. Then goalkeeper Kobel cleared a good shot from Gravenberch.

The game broke down in the 29th minute with a controversial play that conditioned the rest of the match. Mats Hummels launched himself into the plate on Antony dos Santos and referee Michael Oliver showed him the direct red.

You can also read:  Guardiola says he aspires to lead a national team and fight the Copa América

The VAR reviewed the action and in the repetition it was seen that the defender did not hit the Brazilian, as he jumped on time, but the referee video considered that the entry was dangerous enough to maintain the expulsion.

The Dortmund coach, aware that there was still more than an hour to play, removed winger Thorgan Hazard and replaced center-back Marin Pongracic.

The controversy returned to Signal Iduna Park five minutes later. Jude Bellingham fell into the Ajax area and the VAR called the referee to the table, who after reviewing the play gave a penalty because Mazraoui, almost inadvertently, had hit the British midfielder with his knee. Marco Reus did not forgive from eleven meters, although Pasveer brushed the ball with his fingers.

Despite getting ahead, the German team felt in their flesh that they were playing with one less footballer. Marco Rose’s men delayed the lines, especially starting in the second half, and were not able to keep the possessions they enjoyed. Ajax slowly bottled up the local team, with Mazraoui and Tadic getting scared on the right every time they entered Comanche territory.

You can also read:  A pragmatic Brazil beats Chile and strengthens its leadership of the world premier

The fatigue in the Dormund took its toll and the first blow came in 72. Antony hung the ball from the right, a defense of the German team combed the ball and Dusan Tadic, with the shotgun loaded in the small area, launched himself and scored a goal .

With Dortmund asking for the time, Ajax went on the attack with everything and turned the game around thanks to a play that, again, was born in Antony’s boots. The Brazilian entered the right wing, cut and hung the ball into the area, where Haller imposed his 1.90 meters high and headed to the back of the net. The Ivorian, who had hardly enjoyed chances up to that point, scored his seventh goal in the Champions League.

Ajax put chloroform in the remainder of the game and Dortmund, without gasoline or strength, let go. The final thrust came in discount thanks to a goal from Klaassen, which was assisted by Antony, the best of the night.

You can also read:  Kuwaiti Al-Mutawa breaks the record for international matches

With today’s results, Ajax qualify as first in the group with 12 points, followed by Borussia Dortmund and Sporting Lisbon with 6 points and Besiktas closed with zero points.

Incidents: Match corresponding to the fourth day of group C of the Champions League played at the Signal Iduna Park stadium in Dortmund. EFE (HN)