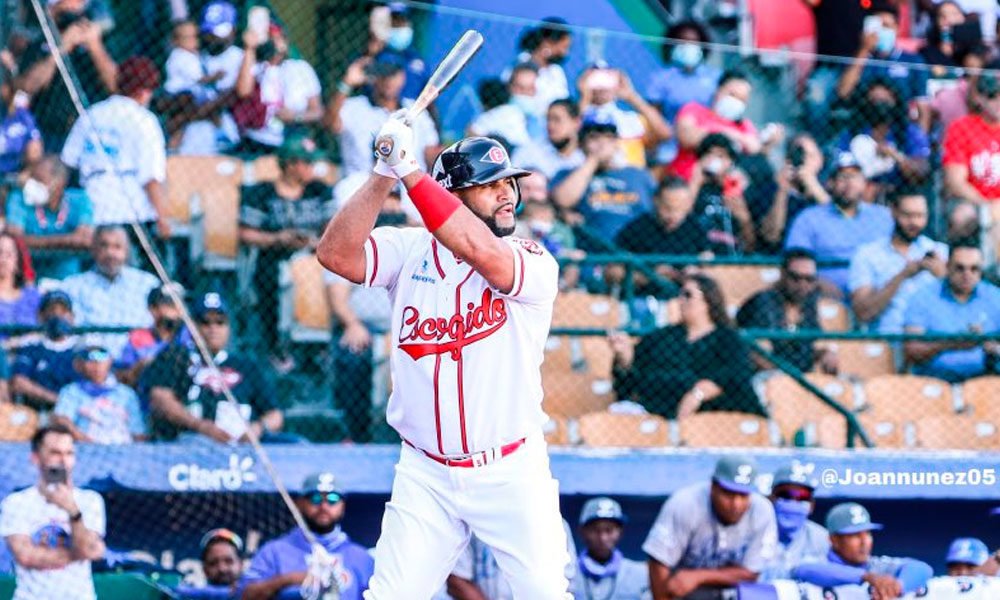 “It was a very special day, the day I’ve always been dreaming of,” said Albert Pujols after making his baseball debut in his country, the Dominican Republic, with a decisive hit.

I hope the fans enjoyed it. I felt a lot of emotions, “said Pujols, 41, a living legend in the Major Leagues, at a press conference on Sunday, after the uncatchable that sentenced the 3 × 2 victory of the Leones del Escogido against the Tigres del Licey on Sunday.

A future Cooperstown Hall of Famer with 3,301 hits, 679 home runs and 2,150 RBIs in 21 seasons with the St. Louis Cardinals and Los Angeles Angels and Dodgers, there weren’t many outstanding baseball dreams for him.

However, the two-time World Series winner in 2006 and 2011 and three-time National League MVP still had one goal to meet: debut in his native country.

“This was a historic moment for me,” said the star player in statements published on the website of the winter (boreal) championship of his country.

Lined up with number 5 on his uniform, batting in the third inning of the Escogido lineup, Pujols’ first hit in the Dominican Republic brought a victory in extra-inning.

It was a shot from the anteroom that signed the American Brett Sullivan in the tenth inning, with two outs on the board at the Quisqueya Juan Marichal stadium, in Santo Domingo.

Pujols had missed his first four trips to the plate until he made right-hander Jonathan Aro the victim of his first hit on his account in the Dominican Republic.

The connection came two decades after the first of his hits in the majors, on April 2, 2001, at the start of a career that has him among the best sluggers of all time.

Only two other players have collectively surpassed 3,000 hits, 600 home runs and 2,000 RBIs in the Big Top: Hank Aaron and Alex Rodriguez.

You can also read:  Acuña, the youngest to hit a home run in 5 games in a row

“This has been a blessing, an opportunity that I have waited for many years (…) and I thank God for being here at the winter ball because I remember when I sold sandwiches in the boxes and always said that I wanted to come and play”, Pujols expressed before debut.

The occasion comes after a trade in which the Lions acquired Pujols in a trade with the Gigantes del Cibao for Melky Mesa and left-handed pitcher Edward Paredes.

Cibao had selected Pujols as the top pick in Lidom’s first rookie draft in 2002, but had never been able to count on him.

“I do not come here to believe that I am going to end the whole world,” said the big league star with humility after his first game. “It’s a new league for me, still (the game in the Dominican Republic) is something that I have to analyze well, get to know the pitchers well.”

You can also read:  Baseball duel in the Big City

His promise: “As I see more pitches and learn more about the league, I will have better at-bats.”

With the last team he played the National League championship series, in which he lost to the Atlanta Braves.

For many it is their farewell … He, however, feels that he still has gasoline.

“I promised that before I retired I would play here. That does not mean that I am going to retire yet (…). Why do I have to leave because someone tells me to? I’m going to retire on my terms, when I feel like I can’t give more, “he warned when uniforming with the Chosen One. AFP (HN)