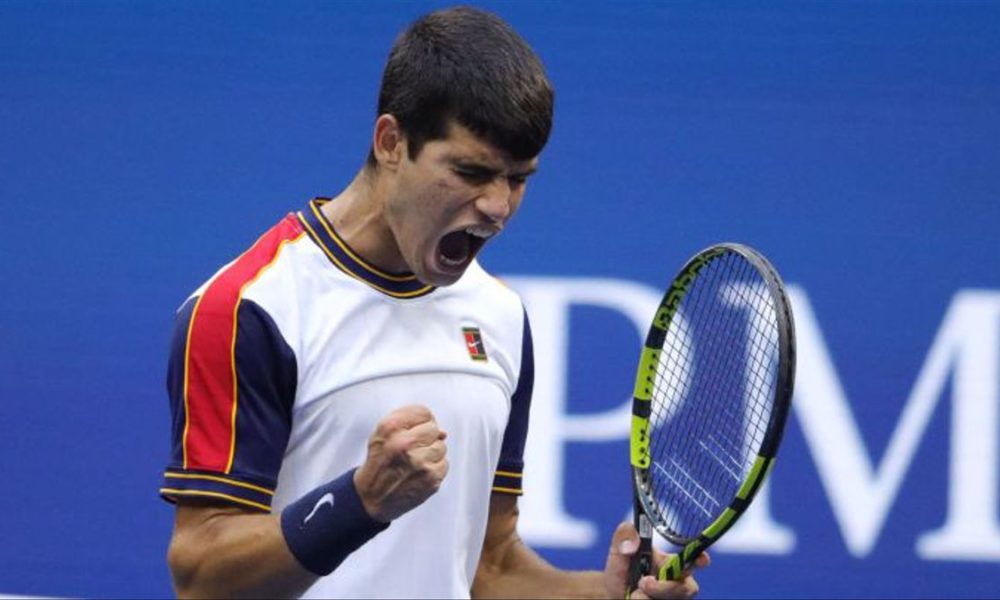 The Spanish Carlos Alcaraz, one of the great revelations of the United States Open, withdrew on Tuesday due to physical problems from the quarterfinals against Canadian Felix Auger-Aliassime, who will play the semifinals against Russian Daniil Medvedev.
The young Leylah Fernandez, also Canadian with an Ecuadorian father, became the youngest Open semifinalist since 2005 defeating the Ukrainian Elina Svitolina, bronze medalist at the Tokyo 2020 Games.
After the triumphs of Medvedev, Fernandez and the Belarusian Aryna Sabalenka, the last match of the day held a long-awaited duel between two tennis players with precocious records.
At 18 years old, Carlos Alcaraz had excited his country and attracted all the spotlights by becoming the youngest male tennis player to play a quarterfinal of the Open in the Open era (1968).
But when the clash started, it was Auger-Aliassime who dominated by a clear 6-3 and 3-1 when Alcaraz, after receiving medical attention on the right adductor, walked to the net and announced his abandonment.
“It is very hard to finish a great tournament like this,” he later acknowledged.
«I had no option to continue playing. The first thing I have to do is take care of my body to stay healthy, “he stressed. “It was a long game and I did not feel well to continue playing, so I had to retire.” Alcaraz, whose brilliant appearance in New York earned him the label of “New Nadal”, came to the clash with more than three hours of play in Legs than his rival. Former player Juan Carlos Ferrero’s pupil was observed during the game without the physical spark with which he had accomplished the feat of beating third-seeded Greek Stefanos Tsitsipas.
Auger-Aliassime, at 21, was the one who inscribed his name as the youngest US Open men’s semifinalist since Juan Martín del Potro of Argentina in 2009, and also as the first of a Gr and Slam born in 2000.
The Canadian, who has as an advisor Toni Nadal, Rafa Nadal’s uncle and trainer, has so far lost his eight ATP finals disputed and in the semifinals he will have a real litmus test against the fearsome Daniil Medvedev, second seed.
– Medvedev at cruising speed –

You can also read:  Murray, Djokovic, Berdych and Verdasco, in the semifinals

In the first game of the day, Medvedev stood in his third consecutive semifinals of the US Open by beating the Dutch Botic Van de Zandschulp 6-3, 6-0, 3-6 and 6-4.
Van de Zandschulp, who came from the qualifying phase, could not achieve another feat like against Argentine Diego Schwartzman in the round of 16, but he was the first opponent to snatch a set from Medvedev in the entire tournament.
“Semis again,” Medvedev congratulated himself. “I just want to do a little better than the last two times and do that extra step, which is the hardest, actually.”
At 25, the Moscow tennis player is still chasing his first Grand Slam title after falling in the final of the 2019 US Open against Rafa Nadal and this year’s Australian Open against Novak Djokovic, who is on the hunt for complete a full of big titles this season.
– Fernandez continues to shine –

You can also read:  Federer accesses rooms where Berdych will be measured

At the age of 19 on Monday, Leylah Fernandez became the youngest semifinalist at Flushing Meadows, New York since Maria Sharapova (18 years old) in 2005.
Spearhead of the new generation at the US Open, Fernandez reached the first Grand Slam semifinals of her career by beating fifth-seeded Ukrainian Elina Svitolina 6-3, 3-6, 7-6 (7/5 ) in two hours and 24 minutes in which he had the enthusiastic support of the New York public.
“I honestly have no idea what I’m feeling right now,” said Fernandez, who dropped to his knees and burst into tears on the court after winning a dramatic tiebreaker.
Fernandez, number 73 in the WTA ranking, is also supported in the stands by her mother, a Canadian of Filipino descent, and receives instructions from her father Jorge, a former Ecuadorian soccer player, from home.
“My father told me: ‘These are your first quarter-finals. That they are not your last, fight for each ball, “he said.
Fernandez will meet second-seeded Belarusian Aryna Sabalenka in the semifinals, who beat Czech Barbora Krejcikova 6-1, 6-4, reigning Roland Garros champion and executioner in the second round of Spanish-Venezuelan Garbiñe Muguruza. (AFP)

You can also read:  Wawrinka eliminated in Marseille