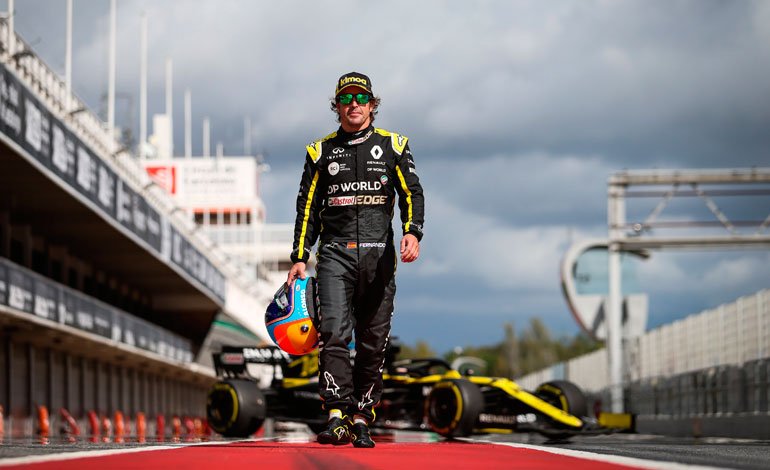 Spanish Fernando Alonso, who will return to Formula 1 next season after a two-year absence, drove a car for the first time since 2018 during a promotional shoot organized by Renault at the Barcelona circuit.

Alonso, 39, got into the RS20, the car that in the 2020 season of the F1 World Cup is being driven by Australian Daniel Ricciardo and Frenchman Esteban Ocon.

The double F1 world champion (2005, 2006) could roll up to a maximum of 100 kilometers, as provided by the regulations, because this session was officially destined to film a promotional ‘spot’.

“I could not ride more than 100 km, but it was really special for me to get back into a Formula 1,” said Alonso in a ‘live’ on Instagram.

You can also read:  Formula One returns to Australia in a remodeled circuit

«It was a good opportunity for me to feel the car again (…) Recovering the speed of a Formula 1 is not easy, but I felt that it improved lap by lap (…) This car has potential, as it has shown in the race, but there are still things to improve, “he added.

“We all have great ambitions for next season, but we have to keep our feet on the ground (…) We are optimistic, we have a lot of talent in the team, we have everything to have a good 2021 season,” he insisted.

– “Comfortable” with the Renault –

In a statement published by his new team, the Asturian driver, who had not been in an F1 since April 2019 in a test session for McLaren in Bahrain, acknowledged that he was “comfortable with the Renault”: “Many people present today were working as mechanics already in my time. Everything is a little easier when you know the faces and the team.

You can also read:  Verstappen sanctioned with two days of "public service" after the Brazilian GP

This return to an F1 seat takes place 20 years after Alonso’s first laps in the highest category of motorsport, on this same circuit in Barcelona, ​​at the time of the wheel of a Benetton.

Alonso made a commitment last July, for an unspecified time, to Renault, the team with which he won his two world titles and whose cars will race next year under the name Alpine, the sports vehicle brand of the French manufacturer.

Alonso has not raced in F1 since the 2018 Abu Dhabi Grand Prix at the wheel of a McLaren, at the end of his 17th year in the category, where he scored 32 victories.

You can also read:  Neuville and Ogier meet on the land, heat and altitude of Mexico

Since his departure from F1, the Asturian has won two editions of the 24 Hours of Le Mans and the title of world endurance champion with Toyota. Alonso has also participated in the Dakar Rally, where he finished 13th in 2020, and in the IndyCar Indianapolis 500 (dropped out in 2017, 21st in 2020). AFP (HN)