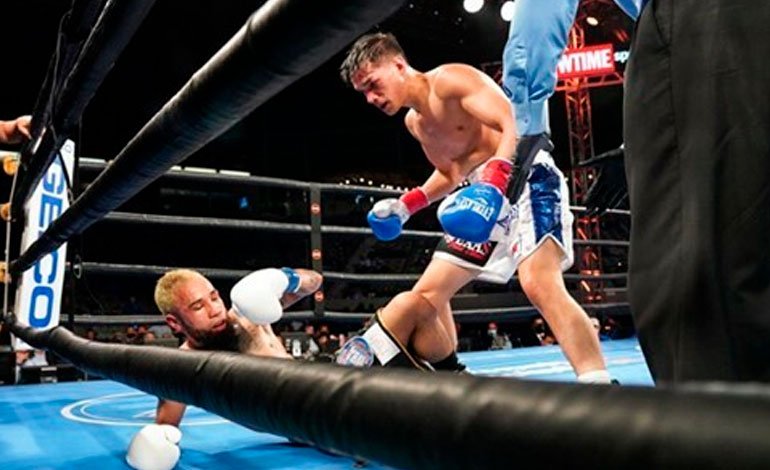 American Brandon Figueroa dropped Mexican Luis Nery with a hook to the liver in the seventh round to win by knockout and snatch the super bantamweight title from the World Boxing Council (WBC).

In Los Angeles, California, Figueroa showed great physical preparation and despite his greater range, he refused to fight from long distance and caused exchanges, in which he took advantage of his great physical capacity.

The first six ’rounds’ were heavy hitters; In the first “Pantera” Nery placed his left well, but already in the second the American began to make a difference with good leg and waist movements against the defending champion.

You can also read:  Three boxers are cautioned for placing bets at the Rio 2016 Games

Nery accepted the exchanges and although at times he showed his good boxing, little by little he suffered the ravages of the volleys of a Figueroa who did not stop throwing blows, especially to the lower zone.

Neither of them made a difference in favor in the first half of the fight, but in the seventh Figueroa stepped up his offense and at 2:18 minutes he finished off Nery with a powerful hook to the liver that sent the Mexican to the canvas definitively.

Nery entered the fight with 31 consecutive victories, 24 of them by knockout. Although at times he took the initiative or connected good response hits, he never felt comfortable against an opponent with feline instinct who cornered the ropes and did not show respect for the favorite.

You can also read:  VIDEO: The Most Viral Crazed Driver Fights of 2015

With the victory, Figueroa reached 22 won fights, 17 of them on the fast track, with a draw and raised his hand like a front row fighter at 122 pounds, with quality to challenge the American Stephen Fulton, dream of the belt of the World Boxing Organization, or to the Uzbek Murodjon Akhmadaliev, champion of the World Association and the International Federation.

The 24-year-old fighter showed great physical ability and although perhaps he did not teach refined technique, he was a machine that throws punches, especially to the stomach, weakening Nery who gave in to punishment. EFE (HN)