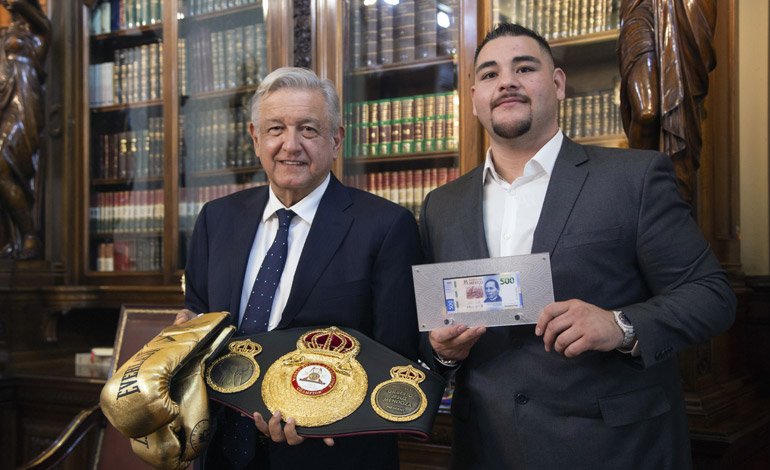 Boxer Andy Ruiz Jr., who this month became the first Mexican-American to be a heavyweight boxing champion, declared himself a Mexican at heart before being greeted by President Andrés Manuel López Obrador.

The fight – which materialized one of the biggest surprises in boxing history – has been celebrated in Mexico, at a time of high tension with the neighboring country due to anti-Mexican statements and tariff threats from President Donald Trump.

Ruiz Jr. met with López Obrador at the National Palace in Mexico City, where he showed the leftist president his new champion belts from the World Association (WBA), the International Federation (FIB) and the World Boxing Organization (WBO). ).

You can also read:  Cuban and US boxers will hold a bilateral tournament in Pittsburgh

After receiving a replica of one of the belts that won “The Destroyer” (The Destroyer), nickname of Ruiz, López Obrador highlighted his humble origins, as well as his “perseverance and stubbornness.”

“He is quite a character, he comes from below, he is the product of the effort, sacrifice, of the struggle of many Mexicans, he shows what perseverance, stubbornness is worth,” said López Obrador, known by his initials as AMLO, next to the boxer and his father.

Ruiz Jr. conditioned that fight to the transmission of the national anthem of Mexico, López Obrador celebrated.

Britain’s Joshua was the best fighter in the world until June 1, although he was left with a record of 22 wins (21 by KO) and one loss, while Ruiz extended his balance to 33-1, with 22 knockouts.