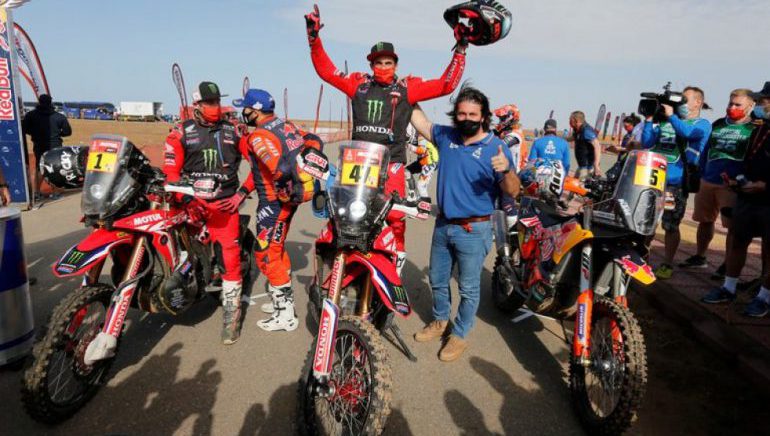 Argentine Kevin Benavides was established as the winner of the 2021 Dakar Rally in the motorcycle category and signed a historic performance for the country: he is the first national rider to win the title of one of the two main divisions of the most demanding competition on the planet.

Aboard his Honda vehicle, Benavides celebrated after the completion of the 12th stage that took place between the towns of Yanbu and Yedá, in Saudi Arabia. This section was won by the American Ricky Brabec, from the same team.

In the general classification, Benavides conquered the test with 4 minutes and 56 seconds of difference over Brabec – who finished second – and with 15 minutes and 57 seconds over the British Sam Sunderland, of the KTM team.

The 32-year-old Argentine and Latin American enduro champion made his debut in the Dakar Rally in 2016 and has already marked the territory by obtaining fourth place in the general table. In 2018 he placed second and this year, in his fifth participation, he won the title.

The motorcycle category entered the last day with great expectations, since on Thursday, after the end of the 11th stage, the first three (Benavides, Sunderland and Brabec) were separated by less than ten minutes apart.

That day, Sunderland had taken advantage of the problems of the Honda riders to win the penultimate stage and close the gap. However, the final day was fatal for Sunderland and he finished in 12th place. In this way, the consecration went to Benavides, who today finished second, 2 minutes and 17 seconds behind Brabec, 4 minutes and 13 seconds before the Austrian Matthias Walkner (KTM), who arrived in third place.

In this way, the Honda rider became the first Argentine to win the Dakar Rally in one of the two main categories. Until now, the only ones who had achieved a similar feat had been the Patronelli brothers, Alejandro in 2011 and 2012 and Marcos in 2010, 2013 and 2016, and Nicolás Cavigliasso (in 2019), but they all did it on ATVs.

You can also read:  Barrichello recovers in hospital from a vascular problem

Hours later than Benavides did, Argentina added its eighth historic title in the Dakar: Manuel Andújar prevailed in the quadricycle category and stretched national hegemony in this division that was inaugurated in 2009 and adds seven Albiceleste triumphs in 13 editions.

This double celebration also places the national flag in fifth place in history in this competition that began in 1979: France leads with 50 crowns, Russia follows with 18, Spain and Italy share the bottom step of the podium with 10 titles.

“An incredibly crazy stage. I started third, thinking that I was going to be able to follow the track and the riders in front made a mistake at km 50 and from there I went on to open 150 km. I pushed and pushed until the end because I knew that Ricky was coming back and he could save me time. Until the last kilometer I was very tense, focused, sailing with the highest possible speed. This Dakar has been incredible. Day by day a lot has changed. I am very happy to get this victory. For me it was the toughest Dakar I have raced so far. I’m very happy. Also for being the first South American to win the Dakar and make history, “the Argentine told the official Dakar website after lifting the crown.

“The key I think has been to keep calm, to go forward with energy, to be focused on the day-to-day work. We have a very good bike, a very good team. People who work with great dedication. Honda has started back in the Dakar since 2013. They had to make updates to the bike, there were problems, but the team has been growing, advancing and learning and, today, we have a solid foundation, with people who work very well. and a very reliable motorcycle ”, he pointed out about the reasons for his championship.

Throughout the competition, Benavides led two stages (5th and 9th), came second three times (1st, 3rd and 12th) and third twice (10th and 11th). In addition, he added a 5th place in the eighth stage. His performance declined in another four stages, falling out of the Top Ten of the day, but that did not mean a problem to seize the crown.

One detail is that his brother, Luciano Benavides, left the competition days ago due to a fall that dislocated his shoulder. The youngest of the Benavides (25 years old) had started that 9th stage of motorcycles located in tenth place in the general table.

THE ROAD TO SAUDI ARABIA

In 2017, with just 15 days left until the start of the Dakar, Benavides suffered a broken hand during training that left him out of the test, so to return to compete he had to wait until the next edition, in which the circuit united Peru, Bolivia and Argentina.

On that occasion, Kevin fought inch by inch with the leading drivers until he lost in stage 10, partly resigning his chances of victory. The second step of the podium was both a prize and a challenge.

In that season he fought for the FIM Cross Country Rally world title, but falls in Desafío Ruta 40 and on the final date in Morocco, prevented him from fighting for the championship.

Finally, Benavides received a harsh penalty of three hours with three stages remaining, for allegedly carrying information not included in the road book on board. This circumstance affected his performance and this, added to the engine change, left him in 12th place, although 2 months later he was reclassified fifth.

You can also read:  Pechito López achieves his eighth victory of the season in Shanghai

Later, in last year’s edition, the Argentine showed an exceptional race pace, even achieving a stage victory, but on the sixth day the engine of his Honda broke 44 km from the end. He stayed in the middle of the dunes and lost four hours to get out of there.

Then came a new penalty for the engine change that left him in 19th place, while the team took the victory through Ricky Brabec, which represented the first achievement of the brand eight years after his return to the race. toughest in the world and more than 30 years after his last victory.

“2020 was a good Dakar for me. My work was very good, I won stages, I was three times on the podium. Then the engine failure occurred and it took me four hours to get out of the desert and then the 15-minute penalty. I couldn’t fight for the general classification, it’s true, but it was a good race in which I suffered a major failure, ”Benavides had explained in this regard.

Regarding the edition of which he was about to participate and that he would later win, the Argentine highlighted that he had prepared himself, since the quarantine helped him to recover from injuries and “do continuous physical work.” “I liked the Saudi desert because it is very diverse, very beautiful, very large and allows us to make a good Dakar project in the future,” said the pilot, who announced that he would “give 100% working day by day to achieve the dream To win this race. And he achieve it… (GG) (AFP)