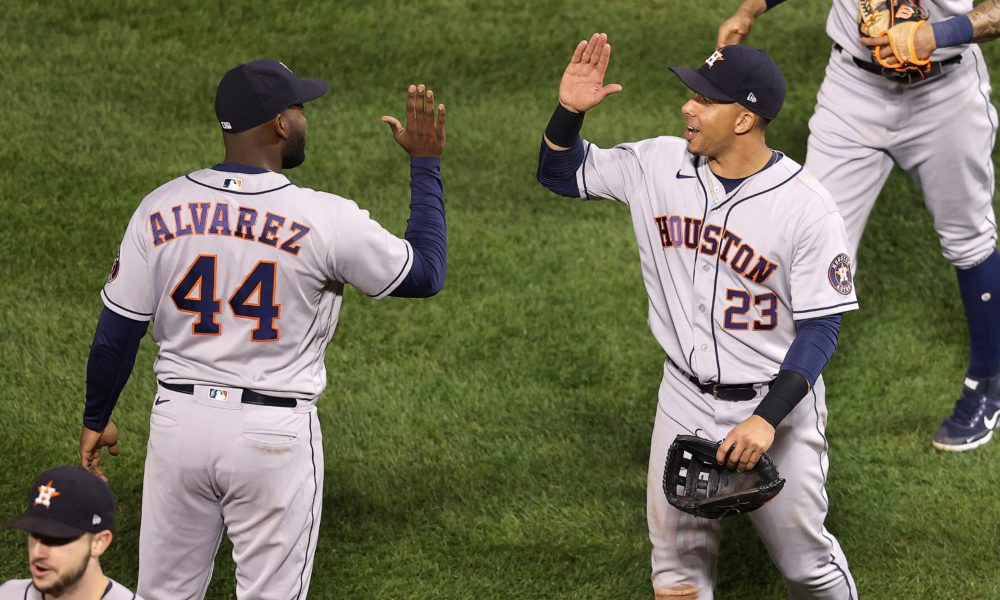 With the ruthless offense of Cuban Yordan Alvarez, the Houston Astros defeated the Boston Red Sox 9-1 on Wednesday and went up 3-2 in the American League Championship Series.

Alvarez went 3-for-5 with three RBIs, including his first homer of this series, the best of seven games, which his team now travels comfortably to Houston where Game 6 would take place on Friday and if necessary Game 7 Saturday.

After yesterday’s victory, the Astros continued to be inspired when Cuban Alvarez homered early in the second inning to star starter Chris Sale, a seven-time All-Star.

Another who stood out on the offensive of the Texan team was also Cuban Yuli Gurriel, batting champion of the season in the ‘New Circuit’, who in this game went 5-3 with three RBIs as well.

The victory went to the Dominican Framber Valdez (1-0), who had an excellent performance of eight complete innings, in which he allowed only three hits and a run with five strikeouts.

You can also read:  In game of more than seven hours, Dodgers cut distances in World Series

Meanwhile, the setback went to star left-hander Chris Sale (0-1), who was punished with three hits and four runs, although he fanned seven batters.

Alvarez continued on fire and in the fourth, after a walk to Alex Bregman, he gave Sale another slap that hit the wall in left field.

However, Sale sharpened his aim and gave the second strikeout of the game to the dangerous Puerto Rican Carlos Correa. Sale later finished off left-hander Kyle Tucker also via strikeout.

In the fifth inning, Dominican Rafael Devers broke the mocking charm of his compatriot Framber Valdez, who thus endured the first hit of the ‘patirrojos’ after 12 consecutive retired men, including four strikeouts.

Next, Valdez hit Cuban JD Martinez with a pitch, but then forced Hunter Renfroe to hit for a doubleplay and put the inning into two outs, but with a man on third. He then forced the Mexican Alex Verdugo to roll to first.

You can also read:  As a child Julio Urías was a fan of the Red Sox

Devers now has a nine-game hitting streak that began in Game 1 of the Division Series against the Tampa Bay Rays.

During that period, the Quisqueyanno has eight runs scored, 13 hits, five home runs and 12 RBIs. Devers is the fourth player in Boston postseason history to have at least 13 hits, five homers and 12 RBIs in a stretch of nine playoff challenges, along with compatriots Manny Ramírez (2007) and David Ortiz (2004). and John Valentin (1999).

In the sixth, the indomitable Alvarez again damaged Sale with an RBI double of two (3 × 0), causing the expulsion of the stellar pitcher.

The chapter was opened by Venezuelan Altuve with a walk, Michael Brantley reached base by mistake and both scored for Alvarez’s biangular. The Astros’ punishment followed with an RBI single by Cuban Gurriel, who greeted reliever Ryan Brasier, for the Texas team’s fourth run. Jose Siri, with two outs, also hit a two-score pusher to extend the score to 6-0.

You can also read:  Astros, last exemplary punishment for cheating in professional sports

A seventh run for the Astros came in the seventh on a single by Jose Altuve, who went to second on a pitcher’s error and scored on another hit by Brantley.

The ‘red-legged’ discounted one in the seventh Devers’ home run, his third in the series, but Framber knew how to liquidate the threat by rolling for Renfroe’s double play.

In the ninth, the Astros scored two more (9-1) on Gurriel’s RBI single to complete the beating.

With Devers’ homer, the Red Sox have 22 home runs in the ten games in these playoffs. (AFP)