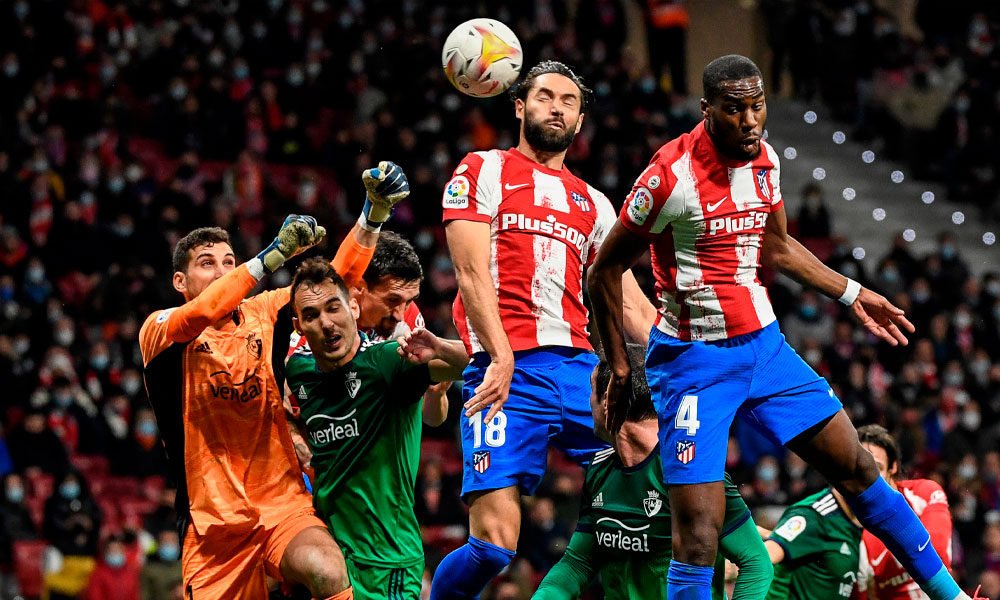 Tied at the last minute by Valencia, disfigured by Liverpool, still in an anodyne expression this season, Atlético de Madrid beat Osasuna in agony (1-0), with a saving goal from Felipe Monteiro when the match seemed destined to an unshakable draw, when the insistence was the only solution to rebel against another disappointing encounter, still far below what is expected of the champion and with a final stop by Oblak.

Already played seventeen games, including this Saturday, Atlético navigates an insistent doubt. It is neither what it intends nor does it look too much like what it was, within an insufficient middle ground when the ambitions and responsibilities assumed by the great teams do not admit of nuances, when the competition for the League does not wait for anyone and when the difference between the group of favorites and pursuers. For now, the Simeone block belongs to the latter, lost in indefiniteness.

Six victories in his last fifteen official matches are an obvious symptom. Much more is expected from his squad than he offers, as much as the solutions that always appear from Simeone, an indisputable man in the change in the last decade of Atlético, are awaited, to whom he recomposed his greatness. Now he needs to rearm his team around a new idea, the new demand proposed by his rivals, as studied as they have it.

You can also read:  Real Sociedad avoids the disaster against Monaco with a goal from Mikel Merino

He still hasn’t made it this season. With exceptions, such as Betis 3-0 among the most recent and few examples, the dimension of this Atlético is yet to be discovered, to be truly expressed, if it does so with the fullness that was sensed when it configured the squad of the that it has. Today it is a more visible team for some individuality than for its group. And that in today’s demanding football is not at all conclusive, just as the continuous centers of Hermoso do not seem so, nor was the entire game, more the first half than the second, offered by the rojiblanco team against Osasuna.

Nothing else Real Madrid has been more productive as a visitor in this LaLiga Santander season than the Navarrese bloc, which brazenly planted itself in the Wanda Metropolitano. Neither nervous nor self-conscious, armed around his five defenses, into a compact structure, without shunning possession of the ball, winner of many of the second plays when the duel went through its first bars, when everything he intended was played Osasuna and, above all, on the Atlético field.

Such parameters do not suit Simeone’s group at all. He needs to grow on the rival terrain, where he feels stronger. Your game also requires more vertigo. Without it, dribbling is a simple mechanism to finish in the same place. In nowhere. The entire first act happened to Atlético except when Griezmann emerged, who, in contrast, increasingly resembles the ‘7’ who scored goals and goals in his first stage. He monopolized every occasion – some not so much for that qualifier – of the first half.

You can also read:  France could not with Bosnia

Because there weren’t too many opportunities. The best of Atlético, an overflowing wall between Marcos Llorente and Correa that ended in Griezmann’s rush; the best from Osasuna, a whiplash from Lucas Torró that Oblak repelled as best he could to sustain the 0-0 at halftime; an invalid result for the rojiblanco team, which has conceded so much in recent weeks that it is only worth winning every day.

Atlético insisted on this, changing the game. Because he began to play in the rival field with the constancy that he had not done before, because he pushed Osasuna towards his area, away from the high block with which he tried to defend himself, and because he prowled over the frame of Sergio Herrera with a number of centers, especially from Vrsaljko, who foreshadowed something more than what had happened before, even though Luis Suárez and Rodrigo de Paul still warmed up on the sidelines to enter the game for half an hour.

You can also read:  Kaio Jorge is already in Turin to formalize his signing for Juventus

In any case, he had not promoted a single stop by the Osasuna goalkeeper in one hour of the game. Nothing threatening to him or to his team, resistant then and redone later, without taking his eyes off the opposing goal either, as aware as each of the spectators of the Wanda Metropolitano of the fine edge on which the result of the match moved, such as Felipe Monteiro’s winning header in the 86th minute. The only agonizing formula that Atlético has today.

Incidents: match corresponding to the fourteenth day of LaLiga Santander, played at the Wanda Metropolitano stadium before 53,261 spectators. EFE