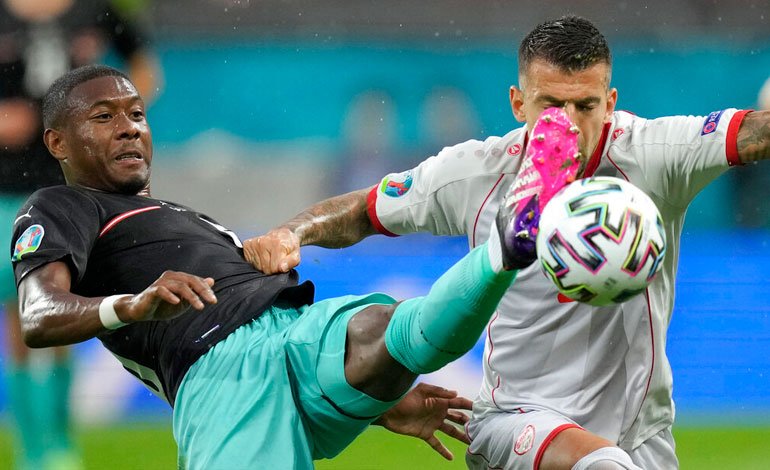 The Austrian national team won its first victory in a European Championship final phase this Sunday (3-1) against an inferior North Macedonia that, led by veteran Goran Padev, fought for a tie until the final whistle.

Surrounded by a stand full of Macedonian fans in the historic debut in a major competition, Igor Angelovski’s men took to the field with conviction and desire to control the ball against an Austria that presented a more defensive scheme than usual.

Despite the efforts of the debutant team, Austria showed from the start that the individual talent of their players allowed them to do a lot of damage with long crosses for which the defenders had no answer.

This is how the first goal of the game came about, Sabitzer and Lainer revived their connection at the German RB Leipzig with a great cross from the former that the latter finished off at the back of the net with a great definition with the inside of his foot.

You can also read:  Italy golea, extend their streak and get closer to Qatar

When his team was having the worst time, the veteran Goran Pandev appeared in the Bucharest rain, who, after a bad rejection by the Austrian goalkeeper, who lost the ball – he claimed to have been fouled -, defined empty goal to score Macedonia’s first goal in a European Championship finals.

Both teams took to the pitch in the second half in search of the winning goal, which caused the match to increase in intensity but also in inaccuracies in the midfield.

As the minutes passed, Austria felt more and more comfortable, especially with the entry of Arnautovic and Gregoritsch, who gave much more depth to the team’s offensive game.

You can also read:  The fifth day closes at the Excelsior

From the boots of the second -Gregoritsch- came the second Austrian goal, which was preceded by a magnificent cross from the left wing by an intermittent Alaba, Real Madrid’s new signing.

Angelovski’s men fought, with more heart than football, until the last minute to scratch the tie, but the talented Arnautovic sentenced the match at the final whistle after dribbling past the Macedonian goalkeeper, Rayista Dimitrevski.

You can also read:  Dutchman Robben announces his retirement from football

Incidents: match corresponding to the first day of group C of the European Championship played at the Estadio Nacional in Bucharest (Romania) before some 10,000 spectators. EFE (hn)