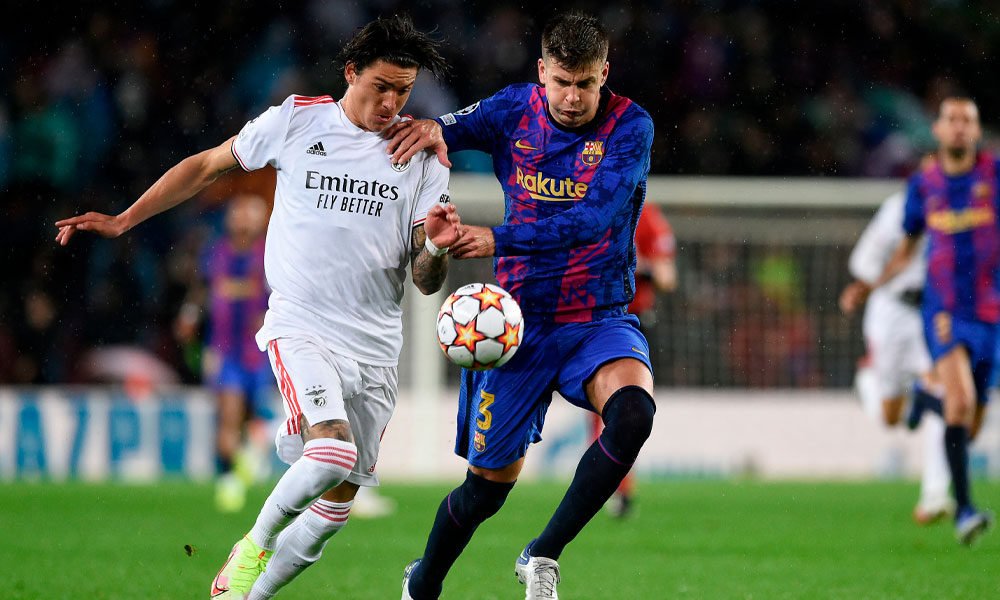 Barça offered their best version of the season against Benfica, but this was not enough to go from 0-0 at the Camp Nou and the pass will be played on the last day of the group stage of the Champions League, in the who will have to beat Bayern Munich in the impregnable Allianz Arena or hope that Benfica will not be able to beat Dinamo Kiev.

On Monday Xavi Hernández, wearing his psychologist suit, asked his team for four things: pride, a spirit of revenge, optimism and keeping in mind that it is Barça. None of that failed this Tuesday in the Barça fiefdom, but the lack of effectiveness in front of goal was too expensive a toll.

“In a while you will see a 4-3-3, at times a 3-4-3 or a 3-5-2”, Xavi announced in the run-up to the match while it was pouring down on the Camp Nou lawn as it did during much of the rest of the game. day to the despair of a large part of the fans, discovered, in a new sign that the Barça house has become outdated.

The rain, friend of the epic, diminished once the match started and then it was found that the 3-4-3 that Xavi put into practice at Al Saad was also the starting drawing for the Barça team.

You can also read:  Cristiano Ronaldo would be negotiating with Juventus his contract extension

Xavi’s solution to complete the starting lead was the Austrian Yusuf Demir, who had not played from the start since 23 September against Cádiz. Evicted on the bench were the most expensive signing in the history of Barça, Philippe Coutinho, and a noted Luuk de Jong.

Precisely Demir had the first chance to score with a strong and low shot that forced Odisseas Vlachodimos to stretch. But the most positive thing for Barça was their intensity, embodied especially in Ronald Araujo and Nico González, and their effective combination game, led by Sergio Busquets, who drowned a Benfica that was slow to connect with the giant Roman Yaremchuk.

Barcelona approached the Lisbon team area again and again, but the doubts of Memphis Depay, the lack of aim of Gavi (author of a new recital in the center of the field) and the success of Vlachodimos against Jordi Alba kept the tables . Faced with such an offensive, Nicolás Otamendi asked his teammates for a reaction on the edge of half an hour of play.

And he was about to exercise it himself putting his team ahead in the 34th minute with a shot inside the area that crossed the goal line after hitting the crossbar. But the referee Sergei Karasev annulled the goal because the ball had previously left the rectangle.

You can also read:  Mexico defeats Costa Rica and remains the sole leader of the octagonal

On the previous play, Yaremchuk headed in against Ter Stegen, who silenced some recent criticism. The Barça reply was overwhelming. Starting from the right, Demir executed a parabola that crashed into Vlachodimos’ right crossbar when more than one Barça fan had already gotten up from their seat to open the cava.

The second half became infatuated with being a replica of the first and Barça continued to delve into the weaknesses of Benfica with no luck, especially since everything that the Lisbon midfield could not contain was thwarted time and again by an imperial Otamendi and his squire Jan Verthongen.

If Benfica’s best line was defense, Barcelona’s worst was attack. And that explained the 0-0. Thus, in the absence of 25 minutes Xavi looked to the bench to bet on the limping Ousmane Dembélé.

The best Barça opportunity was born from the French forward when he had just replaced Demir. A cross from him from the left wing was topped off by Frenkie de Jong in the race, and once again Vlachodimos avoided the goal.

But Barça began to notice the fatigue of the effort accumulated until then, increased by the fact that the French forward was still the only Barça refreshment player when Benfica had already completed the five changes.

You can also read:  Koeman: "It's amazing that we lost"

In the 84th minute, an unstoppable volley from Araujo to the center of Jordi Alba seemed to be the reward for so much chipping stone, but when the euphoria had already unleashed at the Camp Nou the referee annulled the goal for offside.

Thus, Barça had to settle for a zero draw, which was on the verge of being a defeat when in the penultimate play Haris Seferovic missed a goal practically to an empty goal that condemns him to suffer on the last day to go to the second round of final.

Incidents: Match corresponding to matchday 5 of group E of the Champions League played at the Camp Nou in front of 49,572 spectators. EFE