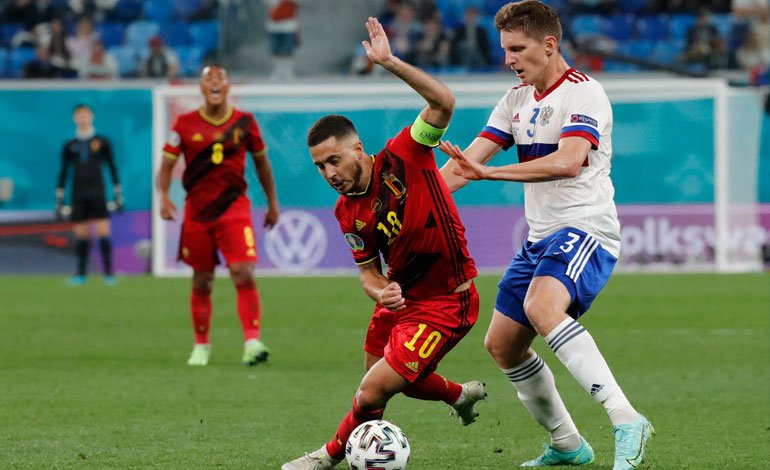 Belgium, with an unstoppable Lukaku, author of two goals, easily beat an inoffensive Russia (3-0), showing that they have more than enough weapons to win the European Championship.

Roberto Martínez’s team was a seamless machine. With almost military discipline and hardly any frills, the ‘red devils’ hit the table.

With a goal in each half, Lukaku showed why he is the terror of any defence. Of course, in the second part the Belgians limited themselves to sleeping the game with their minds set on rivals of greater substance.

The match was about to be postponed due to the collapse of Christian Eriksen in the match played shortly before in Copenhagen between Finland and Denmark, but UEFA decided to go ahead with the competition after confirming the improvement in the Danish player’s condition.

As expected, Real Madrid player Eden Hazard started the game on the bench. That was added to the already known casualties of Kevin de Bruyne and Axel Witsel, who did not even travel to Russia.

You can also read:  Casemiro is recovered and Camavinga already touches the ball

The locals opted for a team with a lot of muscle and with a single artist in the center of the field, Golovín.

Lukaku grabbed all the attention in the first half. After a few minutes of trial and error and in front of a noisy home crowd, the burly forward seized the first chance he had to score.

The Russians asked for offside, but the Inter Milan footballer took advantage of Seménov’s blunder in the clearance to shoot first and score with his left foot, despite the fact that the shot was not clean (min.10).

Lukaku, in a nice gesture, dedicated it to his Inter Milan teammate, admitted to hospital.

The Belgians were still able to score on two other occasions, but on one occasion Dendoncker fired high from a Lukaku pass, and on another Shunin blocked a shot from Thorgan Hazard.

Courtois was a mere spectator. Belgium wanted to sentence in the first part. So it was. A center without apparent danger was cleared by an insecure Shunin and the rebound was taken advantage of by the recently entered Meunier (min.34).

You can also read:  Flick's Germany kicks off with laborious win over Liechtenstein

Eriksen’s collapse hovered over the match in Saint Petersburg, since, after a clash between Castagne and Kuzyáev after half an hour, both were immediately substituted.

A shot over the crossbar by Carrasco after a good individual play preceded the break.

The Russians came out strong in the restart. Courtois had to come out with fists on one occasion and on another he saved a hard shot from outside the area. With a mixture of pride and drive, the Slavs even cornered the Belgians.

The last cartridge for the Russians was Alexei Miranchuk, the fine Atalanta midfielder.

Meanwhile, the Belgians reserved forces. Aware that the tournament is long and that the goal is victory, Roberto Martínez’s pupils opted for long possessions. Only the athletic Carrasco seemed determined to fight alone against the Russian wall.

Then came the moment everyone was waiting for. Eden Hazard jumped onto the field. He had about twenty minutes to leave some glimpse of his great class.

You can also read:  Colombia calls defenders due to possible loss of players in premundial

I’ve tried it a couple of times, but no luck.

Instead, Lukaku was plugged in. He took advantage of a long pass from Meunier shortly before the final whistle to beat the Russian goalkeeper. The silence of the stadium was his best tribute.

Incidents: match corresponding to the first day of Group B of the European Championship played at the Krestovski stadium before 26,264 spectators. EFE