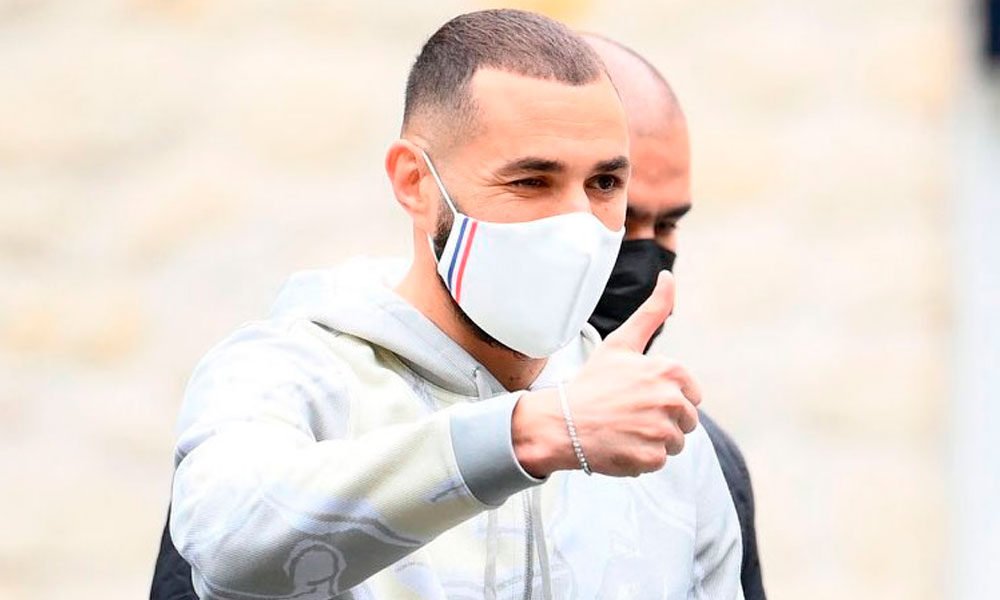 Karim Benzema will experience an intense end of November. On the 24th he will know the sentence of the blackmail case with a sex video to Mathieu Valbuena, in which he is accused of complicity, and five days later he will know if he will be awarded the Ballon d’Or, for which he is one of the favorites.

If the second date had already been in red for months on his personal agenda, that of the sentence was announced this Friday by the Court of Versailles, after three days of oral hearing.

In this process, all the defendants appeared except the Real Madrid player, who, through the mouth of his lawyer, justified his absence due to his busy sports calendar so as not to travel to that city on the outskirts of Paris.

Between the Champions League duel in Kiev and the classic in Barcelona on Sunday, Benzema found no space to defend himself against the accusations of having been an accessory to blackmail, for which the Prosecutor’s Office asks against him for 10 months in prison exempt from compliance and a 75,000 euro fine.

For the Real Madrid footballer, the date of the sentence in just over a month is good news, because it means that it will not harm his career for the Ballon d’Or.

You can also read:  Chiellini will remain at Juventus, according to Agnelli

JUDGMENT AFTER THE GOLDEN BALL

Voting by the 180 international journalists for the award given by France Football magazine will close next Sunday, after the classic at the Camp Nou.

Some of them could have been negatively influenced if the Court had pronounced a conviction on Friday.

Benzema’s lawyer, Sylvain Cormier, insisted that his client’s sports and judicial careers go separately and that the two should not be mixed.

He considered it good news that the court is taking time to analyze a case that it described as “complex.”

“It was not understood that a verdict had been delivered in a few hours. This case has many technical problems, “he explained to journalists at the close of the oral hearing.

Cormier maintains that there is no evidence to convict his client and he is convinced that his decision not to go to trial has not hurt him.

Benzema was the great absentee of the process that Valbuena did attend, who charged the inks against him, accusing him of having pressured him in a conversation that both had on October 6, 2015 in a concentration of the French team in Clairefontaine.

You can also read:  El Salvador equalizes in agony against Jamaica

The blackmail case, which all points to ending with harsh sentences for the other four defendants, has become a duel between Benzema and Valbuena, former teammates and now staunch enemies.

A good part of Benzema’s defense allegation on the last day of the oral hearing consisted of discrediting Valbuena, who in the previous days tried to corner the absentee by assuring that the famous conversation in October 2015 intimidated him.

The now Olympiacos player stressed that the madridista was “very insistent” in the talk that both had in Clairefontaine, which he left, he said, with the conviction that Benzema was part of the plot that was trying to blackmail him.

In the same vein goes another conversation recorded by the police between the Real Madrid striker and Karim Zenati, a childhood friend from the working-class neighborhood of Bron, on the outskirts of Lyon, where they both come from.

It was Zenati who asked him to talk to Valbuena about the sex tape and, when Benzema called him back to tell him what they said during the selection concentration, both made fun of the victim. “He’s gone pale,” Benzema said with a laugh.

You can also read:  Luis Figo: «The Super League is dead»

The defense tried to dismantle those arguments. The lawyer Antoine Vey, one of the best known in Paris, considered it strange that Valbuena took a month and a half to tell investigators about the conversation with Benzema.

“If you were so intimidated, why didn’t you tell the police about it sooner? Why wait a month and a half? “Asked the lawyer rhetorically, finding it” curious “that he only did so when the press had published the transcript of the telephone conversation between Benzema and Zenati.

“That must have bothered him a lot and that’s when he decided to attack my client,” Vey said.

Cormier, Benzema’s traditional lawyer, was even harsher with Valbuena: “He is a victim of his actions. He was filmed having sex and without even apologizing to the young woman with whom he had it.

For the lawyer, Valbuena acts out of envy, since he does not support that his career was slowed down because of this case while Benzema’s is on the rise. EFE (HN)