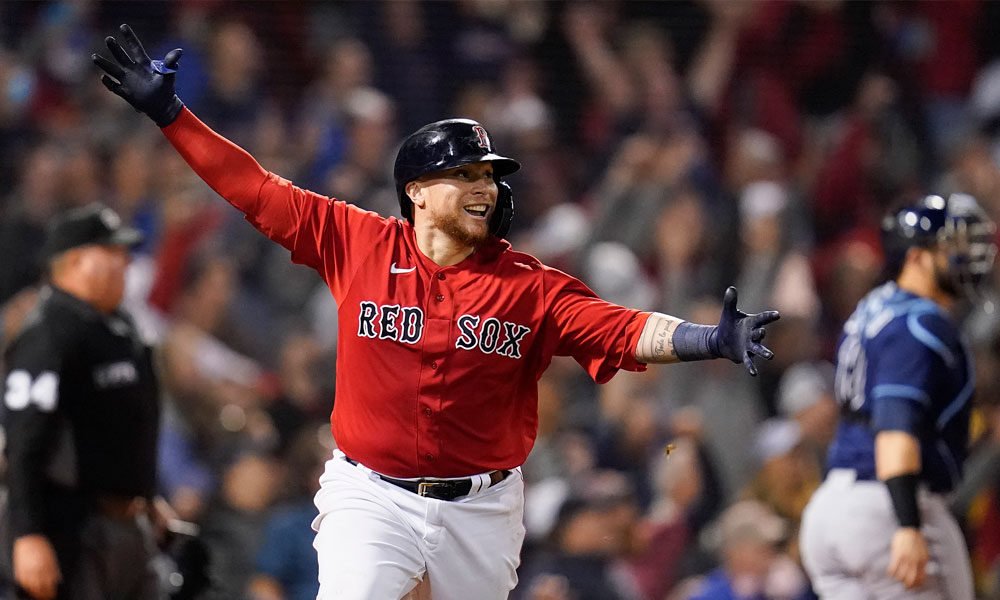 The Boston Red Sox saved a strange rebound and a dark rule, before prevailing in 13 innings, with a two-run homer from Puerto Rican receiver Christian Vázquez, 6-4 to the Tampa Bay Rays in the third game of the Divisional Series of the American League that now dominate 2-1 to the best of five.

The Red Sox, who advanced to the Division Series by winning the wild cards from the New York Yankees, are now just one win away from reaching the Young Circuit Championship Series, when tomorrow, Monday, on the same stage at Fenway Park, and with the programming of Marathon Day in Boston, play the fourth game.

If there was a tie in the series, the fifth game would be played in St. Petersburg (Florida), next Wednesday.

Tampa Bay rallied from a 4-2 deficit to tie it in the eighth inning and was still 4 when designated hitter Yandy Diaz of Cuba singled with one out in the eleventh inning.

Then came the play that made the umpires run through the rule book and the Rays had to control their emotions.

Center fielder Kevin Kiermaier hit a two-out shot to right-center field that bounced off the short wall in front of the Red Sox bullpen, bounced off the hip of right fielder Hunter Renfroe and flew back to the bullpen when Renfroe jumped to try. to keep it in play.

He didn’t make it and it was good for his team after the umpires conferred and went to the headphones, correctly giving Kiermaier a ground rule double and sending Diaz, who had returned home, back to third position.

Diaz was halfway from second to third and would have easily scored if the ball had remained in play. But Baseball Rule 5.05 (a) (8) states: “Any fair ball that jumps is deflected by the fielder into the stands, or over or under a fence in fair or foul territory, in which case the batter and all runners will have the right to advance two bases. “

You can also read:  Phillies Oust Mets From Lead; Cardinals and Reds equalize in Mexico

“If I come in second, that’s fine,” Kiermaier said. But I was hoping to see Yandy score, because obviously he would have scored. … It is incredible that it has worked in their favor just like that ».

Rays manager Kevin Cash said he saw the replay and it was obvious Renfroe didn’t throw it against the wall on purpose.

That’s just the rule. Is that how it works. It was very unfortunate for us, ”Cash said. “I think it was pretty obvious that KK or Yandy were going to turn around to score, but it didn’t go the way we wanted.”

Reliever Nick Pivetta struck out catcher Mike Zunino to end the inning, then leaped off the mound in celebration.

Renfroe walked with one out in the bottom half, then Vazquez hit the first pitch by young Colombian reliever Luis Patiño, 21, on the Green Monster to finish it off.

You can also read:  Former teammate of Mauricio Dubón traded to the Mets

His compatriot, center fielder Kiké Hernández and first baseman Kyle Schwarber each had three hits, including a home run, for Boston.

Hernandez singled in the first, single in the third and home run in the fifth to give him seven straight hits in the series. He was 5-of-6 with a home run and three doubles in Boston’s Game 2 Game 2 victory, becoming the Red Sox’s first player with four extra-base hits in a postseason game.

Red Sox ace Nate Eovaldi allowed a two-run home run by left fielder Austin Meadows in the top of the first, but Schwarber led off the bottom half with a home run.

Hernandez’s home run in the fifth inning gave Boston a 4-2 lead, but the Rays tied it in the eighth when rookie shortstop Wander Franco hit a solo homer and Meadows and Cuban outfielder Randy Arozarena hit a double each.

Teams will play again on Monday night, and the headlines will be announced.HN)