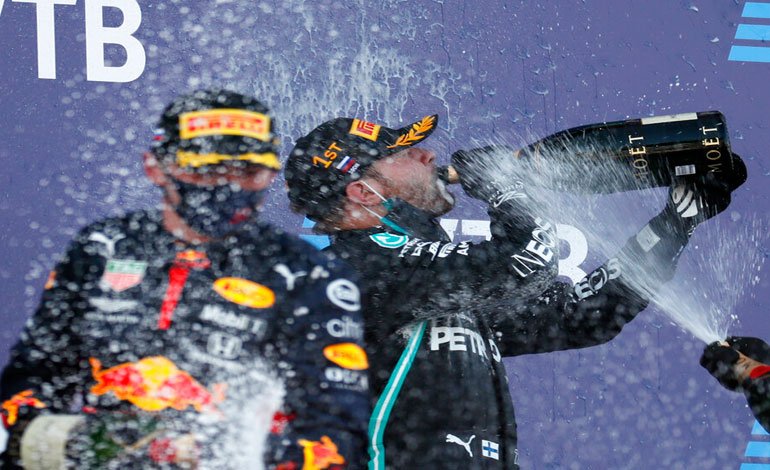 Finn Valtteri Bottas (Mercedes) won the Russian Formula 1 Grand Prix in Sochi ahead of Dutchman Max Verstappen (Red Bull), while Briton Lewis Hamilton, third, will have to wait to equal the record for victories (91) by Michael Schumacher.

“Once I had clean air I felt that the pace was quite impressive and that I could control everything,” declared the Finn after the victory. “It’s certainly great to get a win again, it’s been a while (since the previous one, the first of the season in Austria). I need to keep this good moment to cut points from Lewis. There are a few races left to finish and it is never enough. I’ll keep pushing and not giving up and we’ll see how it ends, “he warned.

This Sunday was not Hamilton’s day. “I just want to go home,” he said angrily after the test. To begin with, he received two five-second sanctions, validated by the stewards at the start of the race, for rehearsing the start shortly before the start of the Grand Prix in a dangerous and unauthorized area.

You can also read:  A Ferrari F1 is driving through the streets of Mexico

Those sanctions, which he complied with in one of the pit stops, also meant the withdrawal of two points on his driver’s license, but after consulting the radio conversations, the race stewards found that the error came from the team, so they changed the sanction of two points of the license for a fine of 25,000 euros for Mercedes.

Shortly before learning of this decision, Hamilton described the rule as “ridiculous” and assured that he wanted to “leave behind” a career in which nothing came of it.

Very angry at making this rookie mistake, in his 259th Formula 1 GP, the reigning champion reacted by asking on the radio where that point was in the regulations.

With the race ruined, he asked his engineer not to give him more information about the race after reproaching him that he had made his stop to change tires too soon. «It was not a good day, it is like that. Spassiba (thank you) to all the fans ”, declared the six-time world champion after the end of the event.

You can also read:  Max Verstappen dethrones Lewis Hamilton in Formula One

– Appointment at the Nürburgring –
To equalize ‘Schumi’s’ record for victories, Hamilton will have to wait for the next Eifel GP, scheduled for October 11 in Germany, at the Nürburgring circuit, in the area of ​​the seven-time world champion.

Until then, the Briton maintains the leadership of the World Cup, with an advantage of 44 points over his Finnish teammate, who added this Sunday his second victory of the season and the ninth of his career in F1, and 77 points over Verstappen, third In the table.

The Mercedes team remains undefeated on the track in the city that hosted the 2014 Winter Olympics.

The ‘Silver Arrows’, black this year, comfortably lead the constructors’ classification. With 366 points, they are a long way from their first pursuer, Red Bull, who has accumulated 192 points. McLaren is third in contention (106 points) followed closely by Racing Point (104) and Renault (99).

You can also read:  Bottas stays with the 'pole' of the GP of Brazil

Behind the leading trio, this Sunday Sergio ‘Checo’ Pérez signed a solid performance and finished in fourth position. The Mexican will leave the Racing Point team at the end of the season, replaced by Sebastian Vettel, and still does not have a steering wheel for 2021.

Leclerc’s teammate next year, the Spanish Carlos Sainz, had to leave the Grand Prix this Sunday in the early stages of the race after an accident.

Bad auction for the weekend. Sorry for the whole team. I had to go over the sausage to avoid the penalty and misjudged the speed on the bollards, ”the McLaren driver described on Twitter. “Strong blow but I’m fine, although disappointed by the team,” added the Spaniard. AP (HN).