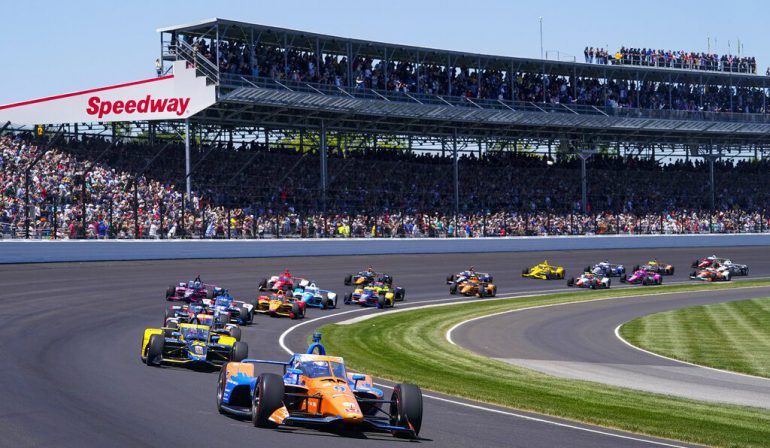 At 46, Brazilian Helio Castroneves won the Indianapolis 500 for the fourth time this Sunday, equaling the record for victories in this iconic motorsport race.

In a thrilling finale, Castroneves (Meyer Shank) overtook Alex Palou (Chip Ganassi Racing) by two laps of the flag, who was close to being the first Spaniard to win the event.

The Brazilian had already triumphed in 2001, 2002 and 2009 at the legendary 2.5-mile (4 km) oval of the Indianapolis Motor Speedway, where some 135,000 fans gathered on Sunday, the largest crowd since the outbreak of the coronavirus pandemic.

In this way Castroneves joins AJ Foyt, Al Unser and Rick Mears as the only drivers to have won the legendary race four times.

What an incredible feeling. I knew it would be a great fight and I am very happy, “congratulated the Brazilian, who began his twenty-first race in Indianapolis in eighth place on the grid.

After New Zealander Scott Dixon quickly lost his first starting position, Castroneves, Palou and Mexico’s Pato O’Ward took turns at the helm during the second part of the race.

You can also read:  Raikkonen: "It's just bad luck"

The Spaniard took first place on lap 195 (out of 200) but the Brazilian made one last, dramatic overtake on a straight with two laps to go to win the fastest edition in history by 0.4928 seconds.

“It hurts a lot, but I can’t be angry about finishing second,” Palou said. “I’m very proud to finish second, it was a great battle with Helio.”

«We will come back stronger. It is only my sixth or seventh race in an oval, “said the 24-year-old Spaniard.

With tears in his eyes, Castroneves jumped out of the car and lived up to his nickname “Spiderman” by climbing the security gate again to celebrate close to the excited audience.

Then he went around the track jumping for joy in front of the 135,000 spectators, 40% of the usual capacity, who were able to occupy the stands again after the event was held behind closed doors last year.

“I love Indianapolis,” said Castroneves. “The fans give me energy. It is absolutely incredible.

Looking to be the youngest winner in history at 22 years old, Mexican O’Ward finished in fourth place, behind Frenchman Simon Pagenaud, who was third.

You can also read:  Raikkonen, the fastest on the penultimate day of testing

– End of heart attack –
Veteran Scott Dixon, a six-time IndyCar series winner and season leader, started from pole but was overtaken at turn two by youngsters Colton Herta and Rinus VeeKay on a clean start.

The first accident came on lap 34, when British Stefan Wilson’s brakes locked on entering the pit and crashed his car into the wall, causing the first stoppage of the race.

The next to suffer problems was Dixon himself, the favorite to win his second title at Indianapolis, who had to make an emergency stop on lap 36 to refuel and his car was slow to start again, losing a lap on his return to track.

In a stage of refueling, Álex Palou, in his second participation in Indianapolis, was placed in the lead for the first time before making his own stop.

You can also read:  Marc Márquez: "I did not imagine that after three races I would be the leader"

Palou, who this season achieved his first win in the IndyCar Series in Alabama, is the second Spanish driver to lead the race, after Fernando Alonso in 2017 and Oriol Serviá in 2018.

The pilot took the head taking advantage of the accident of the American Graham Rahal, who crashed into the wall after his car lost the left rear wheel.

When the test resumed, 74 laps to go, the trio of Palou, Castroneves and O’Ward began the final battle for the crown in which the experienced Brazilian prevailed.

I knew it would be a fight and I stuck my elbows out. I still have it, don’t you think? “Asked the euphoric winner, who compared his feat to that of other veteran champions such as Tom Brady (American football) or Phil Mickelson (golf).

Tom Brady won the Super Bowl. Phil Mickelson won the PGA (Championship). The old people still have it, ”said Castroneves. “We keep kicking the butt of young people. We taught them a lesson. (AFP) (GG)