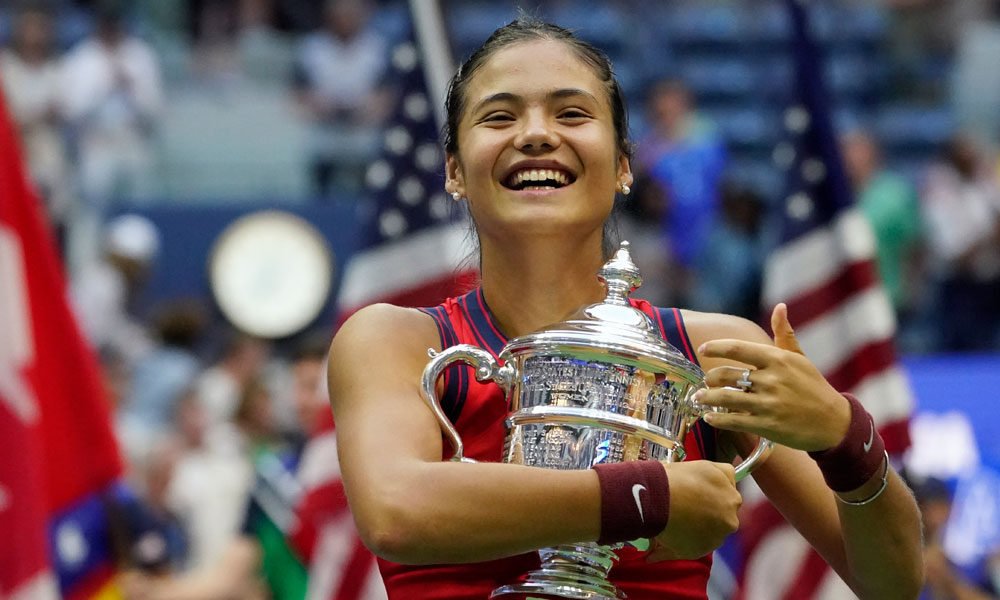 At 18, British tennis player Emma Raducanu defeated Canadian Leylah Fernández in the final of the US Open, becoming the first Grand Slam champion starting from the qualifying phase.

Raducanu edged 19-year-old Fernandez 6-4 6-3 in one hour and 51 minutes on center court at Flushing Meadows.

Number 150 in the world rankings, Raducanu is also the youngest Grand Slam winner since Maria Sharapova in 2004 and the first to win the US Open without giving up a set since Serena Williams in 2014.

From number 73 on the WTA, the daughter and student of a former Ecuadorian soccer player was able to eliminate three of the top five in the ranking: Aryna Sabalenka, Naomi Osaka and Elina Svitolina.

Talented, daring and multicultural, Raducanu and Fernández played the youngest final in New York since 1999, on the anniversary of the attacks of September 11, 2001, when neither of them had been born.

You can also read:  Del Potro: «I thought I was going for Djokovic and Rafa»

Both born in Canada, although Raducanu grew up in London from the age of two, the young prodigies were competing for their first Grand Slam title.

The British, with a Romanian father and a Chinese mother, prevailed with solvency in the first set and, saving a last reaction from Fernández, also settled the duel relying on his service.

Her triumph culminates in an epic US Open in which Raducanu has won 20 sets and lost none in her 10 matches (three qualifying matches) to become the youngest Grand Slam winner since Sharapova at the 2004 Wimbledon.

After making herself known in the past Wimbledon, Raducanu has exploded in her second Grand Slam to be the first British to achieve a large trophy since she achieved it in 1977 Virginia Wade, who witnessed her victory from the stands.

Raducanu will receive a prize of 2.5 million dollars for the title and Fernández another 1.25 million for the runner-up.

You can also read:  Federer loses his crown in Australia; Nadal and Bautista to the quarterfinals

With tennis without apparent cracks, Raducanu put the game on his side from the start of the final.

The Briton broke her rival’s serve to advance 2-0 in a fierce game of more than 10 minutes, in which she had to fight until she broke on the fifth attempt.

Showing some haste, the audacious Fernández did not yet show the decisive instinct with which she fired two former world number 1s (Osaka and Angelique Kerber) but found a loophole to immediately return the bankruptcy to Raducanu.

The set remained even with Raducanu dominating his games from serve and extreme reliability in defensive play.

On the other side of the net, Fernández made up for his lower firepower with dynamism and a variety of poisonous blows.

Raducanu pocketed the first heat after 58 minutes and celebrated it by asking for the support of the stands, who this time were supporting the Canadian more.

You can also read:  Muguruza will start at the Miami Open facing Anisimova or Wang

But Raducanu, mentally unassailable, took pains in the return and regained his service.

Stuck on serve, Fernández watched as Raducanu accelerated towards the goal and enjoyed two match points at 5-2.

Fernández saved the situation without losing his perennial smile and, walking on the wire, displayed his best tennis of the entire final.

In the midst of an electric environment on the court, Raducanu suffered a cut to his left knee while trying to return a ball and, with a break ball for Fernández, the game had to be stopped for a few minutes to receive medical attention.

The Canadian angrily protested the break and, upon returning to the court, lost a second break opportunity and Raducanu ended the match with a powerful ‘ace’.

With this triumph, Raducanu will jump to 24th in the WTA ranking and Fernández to 27th, the best of her career. AFP (HN)