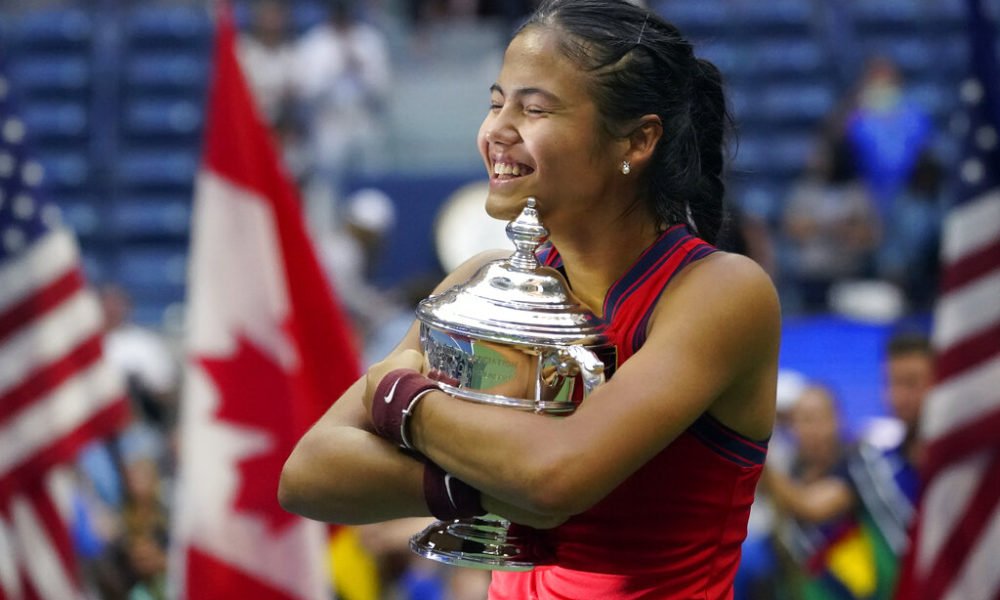 Emma Raducanu’s sensational march at the US Open, as a player who passed the preliminary phase to become champion, allowed her to climb 127 places in the WTA rankings and dawn on Monday with a personal top of 23rd.
The 18-year-old Briton started the year at 345 in the rankings, rose to 179 after reaching the knockout stages at Wimbledon on her Grand Slam debut, and arrived at Flushing Meadows at step 150. Raducanu proceeded to win all 20 sets. who contested by linking 10 wins – three in the preliminary phase and seven in the main draw – to become the youngest player to win a major since Maria Sharapova was 17 at Wimbledon in 2004.
Raducanu made history by becoming the first tennis player to catch a Grand Slam title after passing the qualifying round.
Leylah Fernández, the 19-year-old Canadian who lost 6-4, 6-3 to Raducanu in the final on Saturday, also took a huge leap in the rankings, from 73rd to a career high of 28th.
Australian Ash Barty and Belarusian Aryna Sabalenka remain in the top two places. Naomi Osaka, the US Open champion, fell from third to fifth after losing in the third round to Fernandez.
Czech Karolina Pliskova now occupies the third place and Ukraine’s Elina Svitolina came fourth after reaching the quarterfinals in New York.
Novak Djokovic remains number one in the ATP and with a wide lead over the two Daniil Medvedev, after Medvedev defeated Djokovic 6-4, 6-4, 6-4 in the men’s final of the US Open on Sunday. The setback prevented Djokovic from becoming the first man since Rod Laver in 1969 to win all four Grand Slam tournaments in one go – and the Serbian also failed to break the all-time record of 20 majors titles that he currently shares with Roger Federer and Rafael. Nadal.
Asked if he would adjust his schedule to try to pass Djokovic at the end of the season, Medvedev replied: “I think that’s almost impossible.”
“It’s not the first goal on my mind,” added the 25-year-old Russian who lost to Djokovic in the Australian Open final at the start of the season.
Carlos Alcaraz, the 18-year-old Spaniard who reached the quarterfinals at the US Open, jumped 17 spots to place 38th. Australian Lloyd Harris, who reached the quarters, climbed 15 rungs to finish 31st.
Among Latin Americans, Argentine Diego Schwartzman dropped one place and ranks 15th. Meanwhile, Chilean Cristian Garín climbed two places to place 17th. (AP)