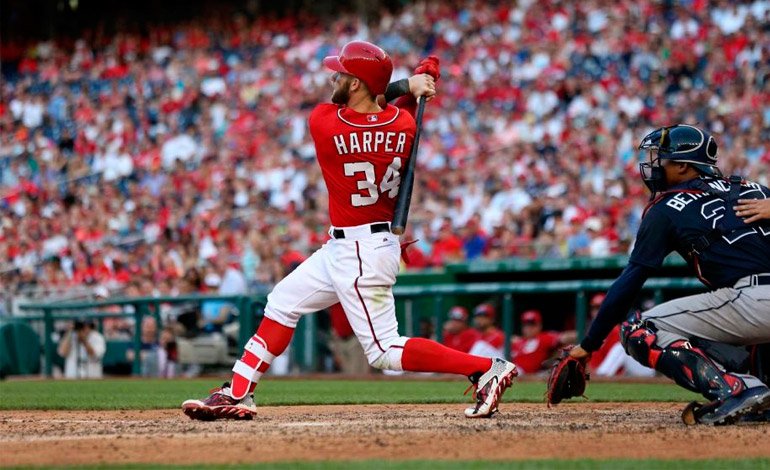 Perfect combination of batting and pitching that occurred during the National League baseball day with slugger Bryce Harper who reached 100 home runs as a professional by hitting a grand slam while Latin starters Vincent Velásquez and Jaime García signed up paths shutouts with the Philadelphia Phillies and St. Louis Cardinals.
Bryce Harper hit his first career grand slam to reach 100 home runs, which destroyed one of the stadium’s electronic billboards, and allowed the Washington Nationals to beat the Atlanta Braves 6-2.
The loss of the Braves and the one suffered by the Minnesota Twins in the American League makes them the first two teams that after nine games played at the beginning of the new season have still not been able to achieve victory since the Tigers of Detroit in 2003.
Atlanta also came one step away from repeating its worst start to a season since 10-0 in 1988.
Harper hit his grand slam in the third inning, hitting a fastball from Colombian starter Julio Teheran (0-2) to right-center field to become the eighth-youngest player in history to reach 100 home runs.
The reigning Most Valuable Player (MVP) of the Old Circuit achieved it with 23 years and 181 days. Hall of Famer Mel Ott was a year younger when he became the youngest to do so.
Stephen Strasburg (2-0) allowed two runs in 7 2/3 innings.
Venezuelan catcher Wilson Ramos hit a solo homer and added an RBI double for Washington, whose 7-1 record tied the 1974 Montreal Expos for the best eight-game start in franchise history.
Jason Hammel (1-0) pitched six shutout innings, driving in one run and scoring another to help the Chicago Cubs beat the Cincinnati Reds 8-1 in the team’s best start to a season since 1969.