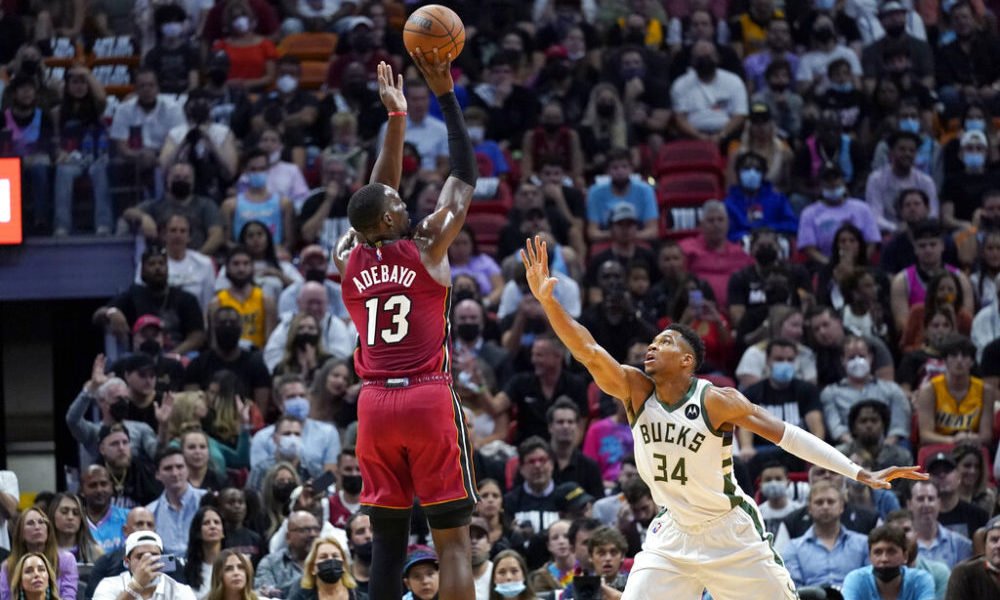 The Milwaukee Bucks, reigning NBA champions, were swept by the Miami Heat by 42 points on Thursday, while Luka Doncic’s Mavericks started the season with a loss and Stephen Curry scored 45 points for the Warriors’ victory over the Clippers.

Giannis Antetokounmpo’s Bucks, who opened the season Tuesday with a victory over the Brooklyn Nets, conceded a first and overwhelming loss 137-95 in Miami.

Without success or defensive intensity, Milwaukee suffered from the casualties due to injury of two of its starters, guard Jrue Holiday and center Brook Lopez.

With their figures Jimmy Butler (21 points) and Bam Adebayo (20 points and 13 rebounds) in command, the Heat put the victory on track with a 40-17 run in the first quarter and a 72-43 lead at halftime.

Guard Tyler Herro added 27 points from the bench against the Bucks without any reaction capacity.

Faced with the bulky disadvantage, coach Mike Budenholzer chose to reserve Antetokounmpo (15 points and 10 rebounds) and Khris Middleton (10 points), who only spent 23 minutes on the court each.

The Heat, who saw veteran point guard Kyle Lowry’s debut (5 points and 6 assists), recorded the second largest victory in their history, surpassed only by a 43-point lead from a win over the Los Angeles Clippers in 1994.

“There’s never been anyone like him, not just in his throwing range but in his competitiveness,” coach Steve Kerr said of Curry. “He is an incredible player, what a game he has played.”

The point guard overwhelmed the Clippers with an epic first quarter of 25 points and 5 triples, on an immaculate 9/9 shooting from the field.

The Warriors dominated 44-27 in the first quarter but the Clippers tightened on defense and allowed them to score just 46 points in the next two quarters.

You can also read:  James and Cavaliers deactivated Warriors with a great strategy

Paul George, with 29 points and 11 rebounds, and the recently signed Eric Bledsoe, with 22 points, led the comeback of the Clippers, who came with an advantage to the fourth quarter.

Curry reappeared down the stretch to reboot the Warriors, who had just beaten the Los Angeles Lakers in their premiere Tuesday.

The point guard nailed a spectacular three-pointer in the race one minute from the end that put the Warriors two points ahead, who managed to maintain the lead until the last horn.

In Atlanta, Luka Doncic and his Dallas Mavericks kicked off the new season with a tough 113-87 loss to Trae Young’s Hawks.

In a new battle between two of the league’s great young stars, Young led the Hawks with 19 points and 14 rebounds while Doncic had 18 points, 11 rebounds and 7 assists with a discreet 6/17 shooting stat. countryside.

The Slovenian phenomenon lost five balls in the game, one more than Latvian power forward Kristaps Porzingis, who started the season on the wrong foot with just 11 points (4/13), 5 rebounds and 2 blocks.

You can also read:  Williams guides Clippers past Suns, who tie loss record

Doncic and Porzingis’ mistake spread to the rest of the Mavericks, who made just 31 of their 93 shots from the field (33.3%).

In this way Jason Kidd debuted with defeat as coach of the Mavericks, where he replaced this season Rick Carlisle, who had been on the bench since 2008.

The Hawks, meanwhile, offered a great collective performance with 20 points from backup guard Cam Reddish and 12 points and 13 rebounds from center Clint Capela.

Atlanta aspires to repeat at least the successes of last season, in which they reached the Eastern Conference finals, where they lost to the Bucks.

“We know that we do not have the respect we deserve. We were in the conference final last year for something and it’s up to us to go out there and try it again, ”stated Trae Young. (AFP)

Results of Thursday’s day in the NBA: