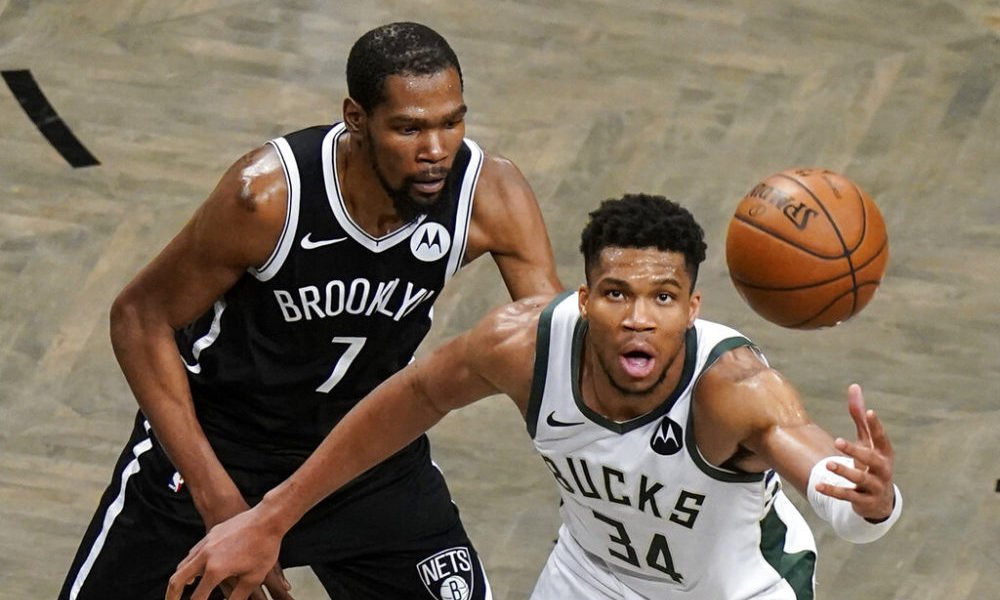 In a dramatic seventh game with overtime, Giannis Antetokounmpo’s Milwaukee Bucks eliminated the Brooklyn Nets on Saturday despite Kevin Durant’s historic performance and qualified for the NBA Eastern Conference final.

Antetokounmpo, who had 40 points and 13 rebounds, emerged victorious 115-111 in a battle of the titans at Brooklyn’s Barclays Center against Durant, who finished with 48 points, the highest score in a seventh playoff game.

The Nets superstar, who was on track for 53 minutes into the game, had forced overtime with a spectacular long shot almost over the horn.

“He is the best player in the world, I said it two days ago and I repeat it now,” Antetokounmpo acknowledged, who breathed a sigh of relief as he continued on his way to his long-awaited first Finals.

«It has been a great step for this organization but the work is not done. That has been the message in the locker room, “stressed the two-time MVP (Most Valuable Player) of the NBA. “When we know who the next opponent is, we have to put this behind us.”

The Bucks will play their second conference final of the past three years against the Philadelphia 76ers or Atlanta Hawks, who will also define their series in a seventh game on Sunday.

This elimination is a huge blow for the Nets, a modest team that managed to reunite three superstars (Durant, James Harden and Kyrie Irving) with the sole objective of conquering the NBA ring.

When they have had their ‘Big 3’, the Nets have been practically unstoppable but injuries plagued their figures all season, especially in this conference semifinal.

James Harden had to leave the opener in the first minute with a relapse of his hamstring problem and had to return urgently with a sprained ankle suffered by Irving in the fourth.

Harden, who played very limited by his muscle problem, scored 22 points Saturday but with a negative 5/17 statistic on shooting from the field.

“It’s very frustrating for me,” said the NBA’s three-time leading scorer. “We gave what we could but we suffered injuries all year (…) We have to take care of our body and be ready for the next season.”

Durant, on the other hand, downplayed the impact of the injuries suffered and underlined the level shown by his rivals.

“Every team has been through adversity this season,” said the two-time NBA winner with the Warriors. “I’m sure other teams have gone through the same thing as us.”

“You have to give Milwaukee credit. They are a great team and they have many options to win the championship. We had good chances in overtime but they didn’t come in, “said Durant, who also had 4 triples, 9 rebounds and 6 assists.

You can also read:  The Michael Jordan Reveal That Wasn't Seen On The Last Dance

– A duel of maximum tension –
Tension hovered over the game from the start at the Barclays Center where, whatever the outcome, one of the leading title contenders was to suffer an early elimination.

With Kyrie Irving dressed for the street on the bench, the Nets watched with relief as Harden looked improved from his physical problems, with more mobility than in previous games.

With little support from his squires, Giannis Antetokounmpo had all the pressure on him and the public tried to exploit his insecurity from the free throw line (8/14 in the game), reaching two shots that did not even touch the rim.

His two best allies, Middleton (23 points) and Jrue Holiday (13), came into the break with a dismal 4/22 shooting from the field.

Durant concentrated on his shoulders the attack of Brooklyn, which reached the break with a slight advantage of six points (53-47).

The Bucks came back strong from the locker room and posted a 12-2 run that led 59-55, with Giannis finding an ally in Middleton, who finally entered the game.

You can also read:  Jayson Granger, the prodigal son enlists with his idol Pablo Prigioni

Harden, on the other hand, was turning off physically and began to miss triple after triple (2/12 total).

The game came just one point behind the Bucks in a heart-stopping fourth quarter.

Durant brought the Nets within two points with 30 seconds to go and Middleton missed the next triple but Holiday managed to rebound the rebound.

With just 2.1 seconds of possession for Milwaukee, Holiday served from the baseline for center Brook Lopez who, instead of shooting, tried to assist Middleton but ran out of time.

The Bucks’ error gave Durant 6 seconds for a final play, who nailed an unlikely throw on the same line of three at the half turn to send the game into extra time (109-109) amid the explosion of jubilation from the Nets fans.

By inches, Durant’s shot wasn’t a triple that would have given the Nets victory.

With both teams extremely nervous and tired, overtime was a collection of errors in which the Bucks managed to get back to a last-minute lead and, this time, Durant was unable to work another miracle.

“I don’t know what else Kevin could do, what he did is out of this world,” acknowledged his coach, Steve Nash. (AFP)