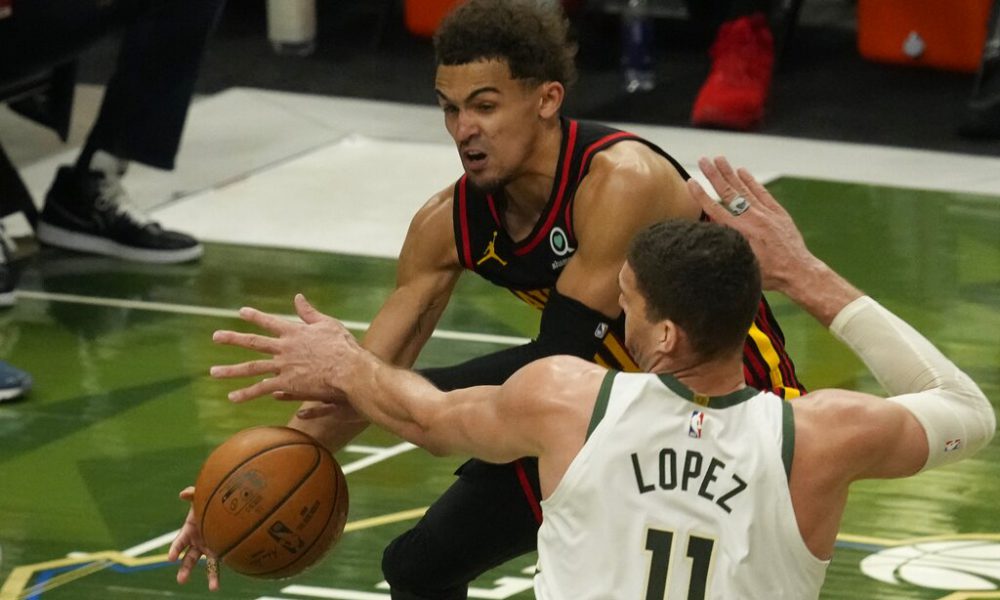 After falling on their court in the first game on Wednesday, the Milwaukee Bucks overwhelmed the Atlanta Hawks 125-91 on Friday and drew 1-1 in this NBA Eastern Conference semifinal.

The Greek Giannis Antetokounmpo commanded with 25 points and 9 rebounds the beating of the Bucks, who came to win by 41 points, accompanied by point guard Jrue Holiday, with 22 points and 7 assists.

For the Hawks, young Trae Young, who on Wednesday sentenced Milwaukee with 49 points, stayed in this second game at 15 points (6/16 shooting) and 3 assists with erratic ball handling, equaling his loss record with 9.

“I take full responsibility for what happened tonight, I have to take better care of the ball,” Young admitted. “I will play better in the next game.”

The series, whose winner will face the Phoenix Suns or Los Angeles Clippers in the Finals, now moves to Atlanta for Game 3 on Sunday.

After eliminating Kevin Durant’s Brooklyn Nets, the Bucks started as favorites against the Hawks but their initial defeat shattered all the odds.

Atlanta, which got rid of the best team in the East in the regular season, the Philadelphia 76ers, once again proved to be a team that knows no fear and that advances on the back of the daring and talent of its leader, Trae Young.

At just 22 years old, the point guard so enjoyed his display on Wednesday that, in one of the images to remember these playoffs, he allowed himself to take a break and shake his shoulders in the middle of the game before scoring one of his four 3-pointers.

Wounded in their pride, Antetokounmpo and the Bucks took to the Fiserv Forum court on Friday determined to send a clear message to their young rivals.

«Today we are aggressive. Focusing on one possession at a time and playing as a team. It was good ”, declared the double MVP (2019 and 2020) of the NBA. “We have to continue like this in Atlanta, it’s the only way.”

Antetokounmpo, launched for his long-awaited first career Finals, wasted no time in punishing the Hawks’ turnovers with numerous points on powerful counterattacks.

At the same time, guard Khris Middleton (15 points and 8 assists), Giannis’ best offensive ally, was regaining his aim from the 3-point line after missing all nine of his attempted 3-pointers in the first game.

You can also read:  Kings coach sued for sexual abuse

The rest of the Bucks also became a threat from the outside line, with up to seven players hitting triples, while Jrue Holiday applied an effective defense on Trae Young, who only went to the free throw line three times by 12 o’clock. Wednesday.

The Hawks resisted thanks to the success from the bench of Italian Danilo Gallinari (12 points in 16 minutes) but Trae Young’s extremely audacious style of play became reckless in a nightmare second quarter.

The point guard, who is surprising in his first playoffs with averages of 30.5 points and 10.5 assists, added 8 turnovers at halftime, which facilitated the Milwaukee’s 20-0 run that put the victory on track and unleashed the euphoria at the Fiserv Forum.

They did what they had to do. They came out with intensity, they put pressure on us, “acknowledged Hawks coach Nate McMillan. “They taught us that there is another level we have to reach to win games and advance, and for that we have to play harder.”

You can also read:  Nuggets and Pelicans remain undefeated in NBA

“We were not up to the task and now we have to recover and defend our advantage in the field,” he stressed.

The Bucks went to the locker room 32 points ahead on the scoreboard (77-45), the biggest advantage at halftime in a playoffs since LeBron James’ Cleveland Cavaliers against the Boston Celtics (72-31) in 2017.

The Hawks, knocked out, watched as Milwaukee reached 41 points (105-64) at the start of the third quarter and soon threw in the towel by withdrawing their best players from the court.

Both teams played the fourth quarter with substitutes, including guard Cam Reddish (Hawks), who reappeared after four months out due to injury, with his head already in the third round on Sunday.

“We achieved the goal of getting a win outside of Atlanta,” recalled Trae Young. “Now I’m looking forward to playing a conference final in front of our fans, it will be fun.” (AFP)