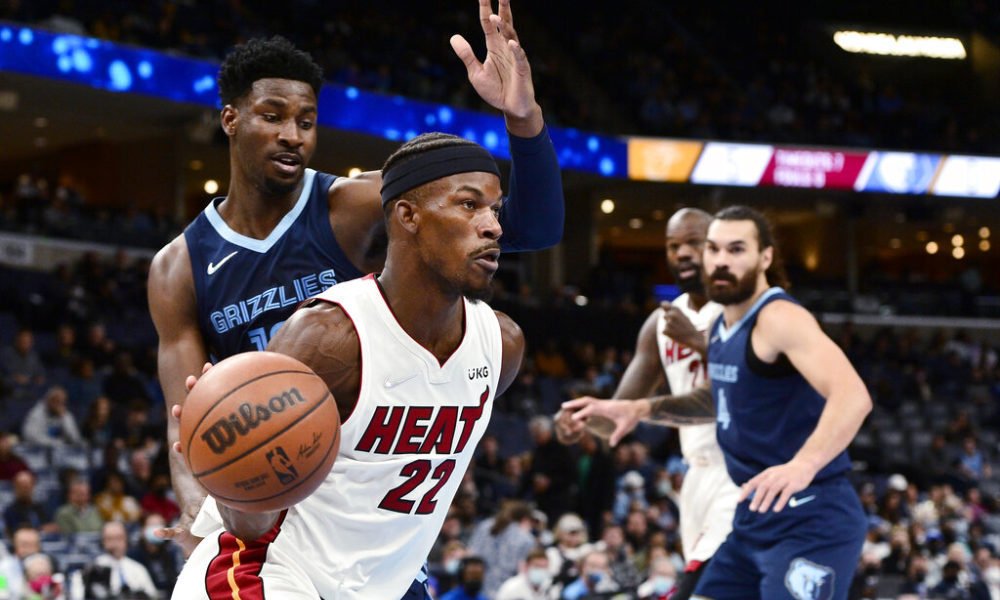 Star Jimmy Butler finished Saturday night with 27 points and the Miami Heat made a whopping 21 triples to defeat the Memphis Grizzlies 129-103 this Saturday in the NBA.

Tyler Herro added 22 points and the Heat capitalized on a strong long-range shooting performance for their second straight win.

Duncan Robinson and point guard Kyle Lowry each scored 15 points, while the latter added eight assists, while the Miami team with its 21 3-pointers fell within one of the franchise record set last May against the Milwaukee Bucks.

Ja Morant and De’Anthony Melton led the Grizzlies with 20 points each, Desmond Bane finished with 17 points and Kyle Anderson with 13 for the Grizzlies.

For three quarters the Heat continued their excellent shooting for a 56% shooting effectiveness from range, including 18 of 28 from 3-point range and a lead that had increased to 26 points.

You can also read:  Bill Russell to auction items from his NBA career

That was enough for Miami’s fifth win in the first six games of the season.

Miami missed just one of its first eight shots in the game and converted 71% in the first quarter, building a double-digit early lead.

Organizer Lowry and Markieff Morris hit a pair of 3s each on that stretch. Miami’s lead would extend to 19 in the second quarter as the Heat continued their accurate shots.

By the time the teams reached halftime, the Heat were still shooting less than 60% and had connected 11 of 15 from outside the arc.

The Heat led 67-54 at halftime thanks to 23 points from Butler, who missed just one of his seven shots and made all 10 of his free throws.

You can also read:  Up for auction, 1992 Olympics Magic Johnson jersey

In New Orleans, the New York Knicks submitted the New Orleans Pelicans 123-117 at home, supported by the excellent offensive work of RJ Barrett, who hit six triples and added 35 points, the maximum of his career, for his fifth victory in six games.

Evan Fournier hit five from deep and scored 19 points, and Kemba Walker made four triples and also scored 19 cards for the Knicks, who never lost and led from the moment Walker connected from deep.

You can also read:  Argentine Laprovittola top scorer in the Spanish league

The Pelicans were already struggling earlier this season creating a consistent offense without star power forward Zion Williamson, who is recovering from foot surgery.

Jonas Valanciunas led New Orleans with 27 points and 14 rebounds, while Devonte ‘Graham finished with 17 points for the’ Pelicans’.

The Pelicans used a 13-3 offense to get closer to 111-109 on a layup from rookie Herb Jones with 1:51 to play, but the Knicks finished with the victory.