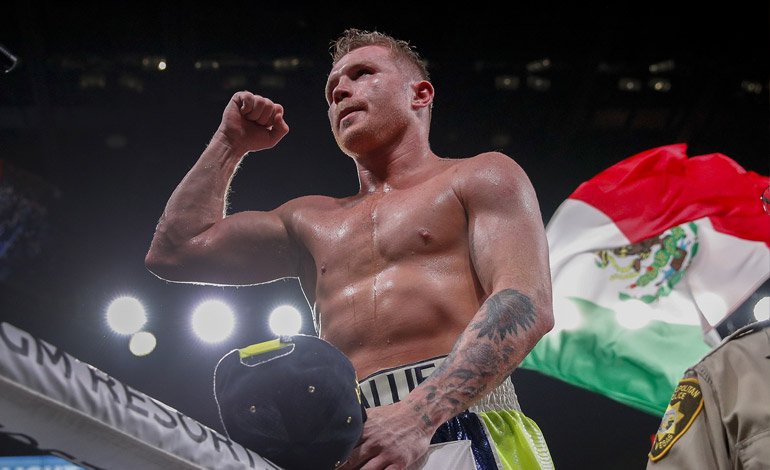 The Mexican boxer Saúl «Canelo» Álvarez was euphoric after having achieved the victory by technical knockout in the eleventh round against the Russian Sergey Kovalev from whom he snatched the title of light heavyweight world champion of the World Boxing Organization (WBO) .

“I am very grateful,” said Álvarez, 29. “This is just one step in my career, in my history, and all I ask is that you be patient because Canelo will make history. That is a guarantee.

Álvarez, who won a purse of 35 million, forced the 36-year-old Kovalev to do his best to maintain it without entering his guard, but in the eleventh round he did not have the same physical reserves and was hit hard with a hook. to the chin and then a right hand that left him kneeling against the ropes without reaction capacity and the referee stopped the fight.

“I think my strategy was the good one,” said Álvarez. “I knew that if I got into his guard and could land my punches, they were going to make a difference in the end.”

You can also read:  The last goodbye of the Mexican fly Elías Emigdio

The strategy was perfect for the Mexican fighter who claimed his fourth world title in four different categories, and was joined by legendary Hall of Famers Sugar Ray Leonard, Thomas Hearns and Mike McCallum, as the middleweight champions who also achieved the crown in the light heavyweight division.

He also became the first Mexican boxer to win titles in four weight classes before he was 30 years old (29 years, 107 days).

“The general plan was patience, that was basically patience,” Alvarez analyzed. “We knew it was going to be five, six rounds, and it would take me some time to get there. But honestly, he’s a great fighter. I’m new to this weight, new to this division. Much credit to him. He’s a great fighter, but we stick to our game plan. It was a bit late, but overall it was successful.

You can also read:  Catrachos struck in Guatemala

Álvarez, who once again had the full support of the 14,490 fans who witnessed the fight, held at the MGM Grand Garden Arena, in Las Vegas (Nevada), permanently chanting his name, reiterated that the fight turned out as expected.

“It was a very close fight because I was on the defensive, I was closing my guard. All he was doing was trying to make points, but we knew what was coming. Inevitably it would come, and everything went as planned, “explained Álvarez, who leaves his mark at 53-1-2, with 36 knockouts.

Regarding his future, Álvarez said that after the fight with Kovalev, the plans were to lose weight again, but now there are more options when it comes to fighting again.

You can also read:  Mayweather Jr. will face another second-rate rival

“After the Kovalev fight, the plan was to go down to 160, 165 pounds, but why not, maybe 175 again,” Alvarez admitted. We have to see what happens. We have to do what is best for us. We have to look for the best fights, the great fights, but obviously give Mexico the victories.

For his part, Kovalev, 36, who took home a $ 3 million purse, said he plans to continue his career despite his age and after being knocked down in his last two bouts.

“I will be back. I’ll come back much stronger, ”said Kovalev (34-4-1, 29 KOs). I know that I can be a unified champion. Nobody wants to fight me in my division. This rival, Álvarez, is fresher. Came to my division cooler. It has more stamina, but it’s okay. It is a good experience for me ».EFE