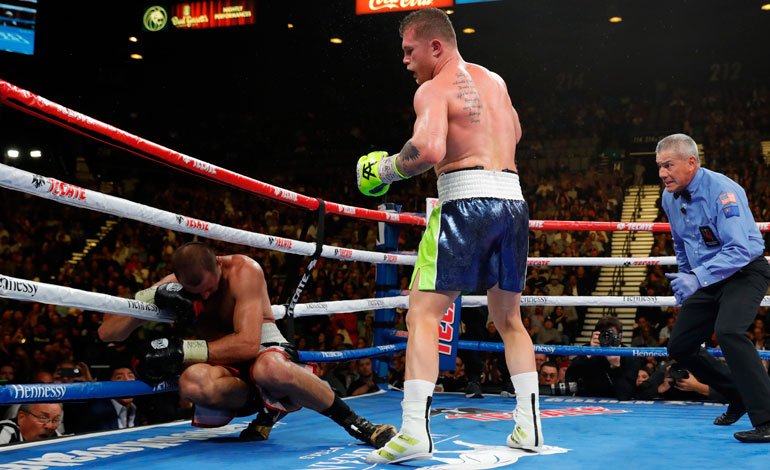 Mexico’s Saúl “Canelo” Álvarez claimed the WBO light heavyweight title by defeating Russian Sergei Kovalev by KO in the 11th round, achieving the feat of becoming a four-division champion after moving up two notches.

After a great weakening, long controlled by Kovalev thanks to his jab that allowed him to keep Alvarez at bay, “Canelo” finally found the gap in the middle of the eleventh inning.

You can also read:  Julio César Chávez Jr .: «I am so poor that the only thing I have is money»

A terrible left hook to the chin made the Russian falter and a powerful right hook brought the Russian to his knees.

He remained on his knees just because the rope was holding him up, it took him several minutes to regain his spirit, while “Canelo” received cheers from the spectators of an MGM Grand so far waddling.

After winning the WBC and WBO belts at super welterweight, WBC, WBA and IBF at middleweight and WBA at super middleweight, the boxer from Guadalajara adds the WBO light heavyweight to his record.

A remarkable performance for this only 29-year-old boxer, who started at age 15 among the pros.

Especially since he achieved what few could do before him, that is, beat a specialist in one category, such as Kovalev at light heavyweight, coming directly from two categories below.

The last to have achieved this performance, with no title at stake, was the Filipino Manny Pacquaio, who had surpassed light welterweight and ended the career of American Oscar De La Hoya in 2008.

Two boxing legends who made history, as they are the only two who have been world champions in six different divisions.

You can also read:  Promoter says Mayweather will box against Japanese kickboxing champion

“Canelo” now has four. But he was the first since Henry Armstrong in 1938 to be simultaneously in three divisions (middle, super middle, and middle heavy). As he had announced, he in turn enters the history of this sport.

The Russian had lost his World Boxing Association (WBA), International Boxing Federation (IBF) and WBO belts in back-to-back losses to American Andre Ward in 2016 and 2017, but regained part of the title by beating Colombian Eleider Álvarez in a rematch in February. AFP