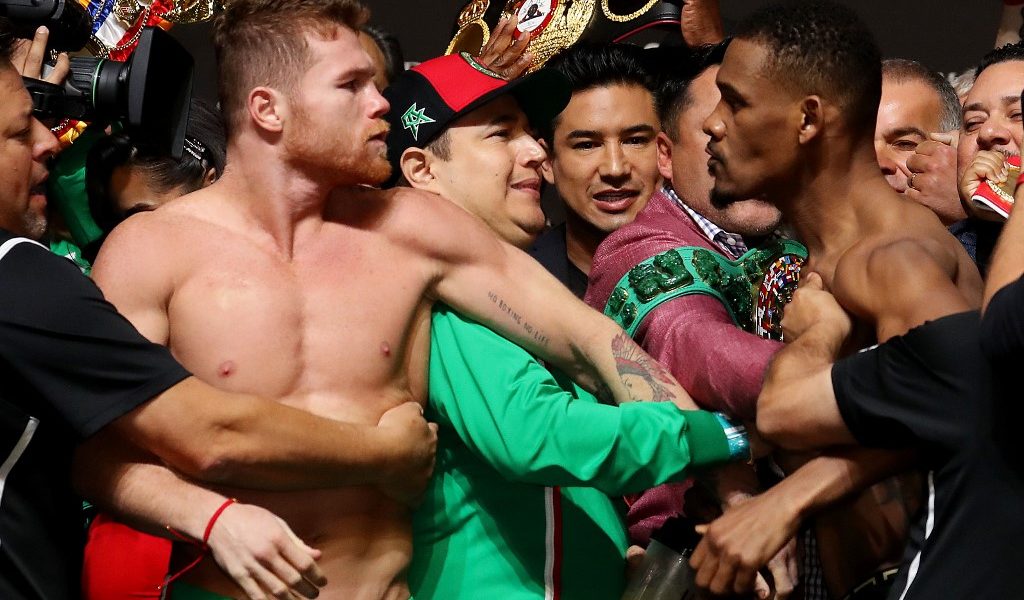 Mexican fighter Saúl «Canelo» Álvarez and American Daniel Jacobs passed the scale test, after both were below the limit allowed for the World Council of Middleweight title unification bout. Boxing (CMB), the Association (AMB) and the Federation (FIB).

Álvarez, who will put into play the titles endorsed by the WBC and the WBA, put the needle on the scale at 159.5 pounds, half less than the division limit, while Jacobs, who will expose the IBF title, marked the limit of 160.

The fight, agreed to 12 episodes, will take place on Saturday in Las Vegas (Nevada), having the Mexican as a key part of the function, with which the festivities of May 5 will be celebrated, in addition to being the great favorite in the bets.

The venue where the weigh-in ceremony took place was packed with fan fans of the fighters, and they had a preview of what will happen tomorrow, as both fighters engaged in a series of shoves after they both got on the scale.

The assistants of both had to separate them before starting a major skirmish, and it was the most exciting of a monotonous ceremony as the entire promotion has been, without any type of sporting incentive or prominence by the two fighters.

The Mexican champion will take a bag of 35 million dollars, while Jacobs will receive 2.5 million for the signed contract, but will reach 10 million dollars with the contract he has signed with the DAZN chain.

The series of shoves began after instead of standing face to face, each leaned his head against the opponent, and Jacobs threw “Canelo” who responded with another shove.

At that moment the team of assistants of the two fighters intruded to separate them.

Many people were enthusiastic but others said it seemed like a performance by both, as is customary at every weigh-in ceremony to publicize the fight.

You can also read:  «Chiquita» González: Rigondeaux is a good boxer

The same situation was experienced by “Canelo” when he stepped on the scale to fight Gennady Golovkin.

After the fight, «Canelo» said that he feels sure of the victory, since from the moment he laid his head on Jacobs’s, he says that «I perceived that he is afraid, I hope he comes out with the intention of knocking me out to make a good fight, but he won’t make it, he can’t be better than me.

While Jacobs indicated that “I only gave him a sample of what will happen to him tomorrow” during the fight and added that “I don’t want to talk too much, because tomorrow it will be my fists that will speak.”

Jacobs, who reached 160 pounds, looked lean, muscular and in great shape, and «Canelo» looked slimmer, so it is possible that during the hours until the start of the fight the Mexican will recover and get into the ring heavier than Jacobs.

You can also read:  Hopkins says goodbye to boxing at the Forum

At a second weigh-in on Saturday morning at 8:00 am the weight limit for is 170 pounds.

If either fighter exceeds the limit, he will have to pay $ 100,000 for each excess pound up to a maximum of $ 1 million if he does not show up for the weigh-in.

“Canelo” recently signed a $ 365 million contract with DAZN for 11 fights, so if he exceeds that weight limit he will not be affected financially and will receive $ 35 million in his second fight under the new contract. .

It is a different story for Jacobs, who indicated that he will arrive in weight on Saturday because he does not want to be fined, since “I do all this only for my family.”

Everything was prepared for Saturday’s fight, in which there will be a new holder of the three world titles in the media division.

Both fighters, as usual, said that at the end of the fight they will each be the champion.