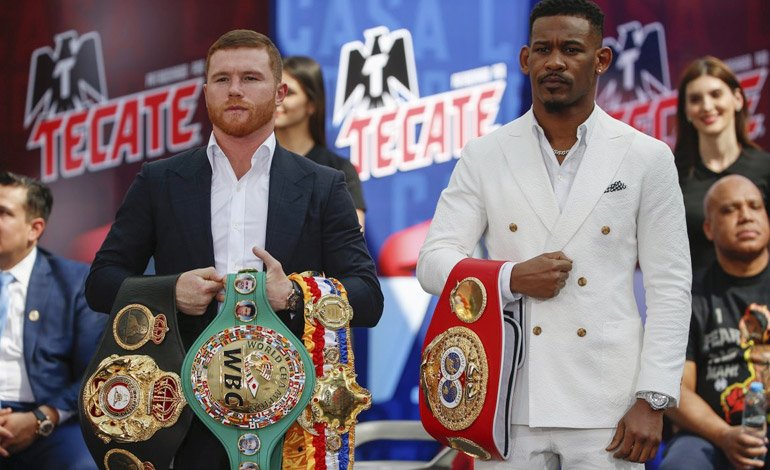 A priceless belt designed with jade stone, 14 karat gold plated and precious stones, loaned by the World Boxing Council (WBC), will be the other title that will be disputed between the Mexican Saúl «Canelo» Álvarez and the American Daniel Jacobs, on May 4 in Las Vegas.

The belt will be the extra award for the winner of the fight in which Álvarez will expose the middleweight titles of the WBC and the World Boxing Association (WBA) and Jacobs will risk the belt of the International Boxing Federation (IBF).

“The Mayan belt is decorated with the Mayan god Kukulkán, which in Mayan means Feathered Serpent,” said designer César Menchaca.

“We try to capture our culture in the belt and associate it with the Mayan culture, a warrior, such as boxers, warriors in the ring, and a jaguar that is an endemic animal of Mexico and that is appreciated in the world”, added.

The ancient Mayan culture, developed from the year 353 BC to 1697 of the current era, hosts archaeological centers in southern Mexico, in the states of Campeche, Yucatán and Quintana Roo, where this year in its resort in Cancun, it will take held the 57th WBC Convention from October 21-26.

It will be the third year that the Council awarded this special title after 2017 and in 2018 the body decided to award belts with belts on the dates of May 5 and September 16, the most attractive weekends for boxing in Las Vegas. motives of the Huichol and Chiapas cultures of Mexico and both were won by Álvarez.

You can also read:  Cubans go for first place in Olympic boxing

Regarding the fight, the president of the Council, Mexican Mauricio Sulaimán, anticipated that whoever manages to impose his style on the day of the fight will have a better chance of winning.

“It is a different fight, it is not the traditional ‘pique’ of boxing, it is a highly professional sports duel and it shows in the preparation of both,” he said.

The manager said that Jacobs has a special motivation “to have beaten cancer and to have been able to become world champion again. He is a great fighter, hits hard and is in his division, “he said.

He considered that it is a “very complicated fight for both and it will not be easy for anyone.”

You can also read:  The cheeky bag De La Hoya offered Floyd Mayweather for a rematch

Regarding “Canelo” he said that “he is a great boxer, with a boxing that he has been refining and is always very well prepared, he is also in his natural division and also has a good punch.”