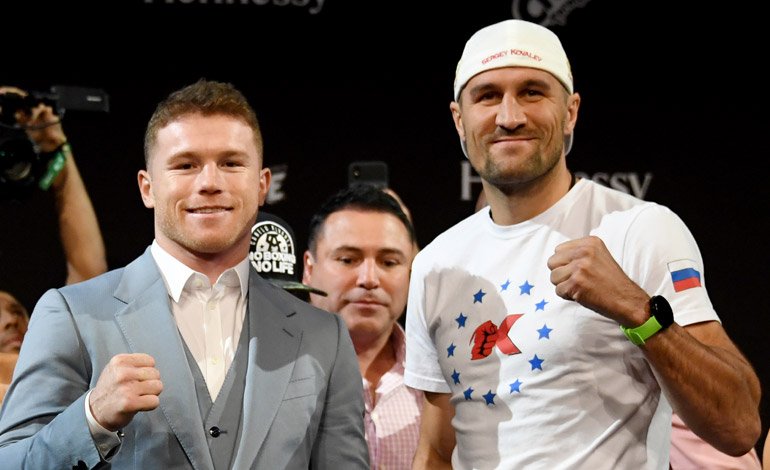 The 29-year-old Mexican middleweight king (52-1-2, 35 KOs) is considered a betting favorite for his speed and youth, compared to Kovalev’s experience and power.

Alvarez will fight for the first time since a unanimous decision over Daniel Jacobs in May, while Kovalev successfully defended his belt with an 11th round knockout of Briton Anthony Yarde in August in Russia.

Although Alvarez has boxed in multiple divisions, he had never before exceeded the super middleweight limit, where he submitted Britain’s Rocky Fielding in less than three rounds last year.

You can also read:  I will squeeze my rival until he "suffocates"

Kovalev (34-3-1, 29 KOs) looks like a much more complicated opponent. Even considering the 36-year-old veteran has shown clear signs of aging in some of his recent outings, the Russian remains a threat.

“He is the best in his division, he is one of the best. That’s why we chose him: to make history by fighting one of the best, ”Alvarez said this week. «I feel comfortable, I feel good, we will see on Saturday how everything goes. I trust my endurance, my strength.

Although Alvarez has already shown his ability to absorb blows, especially in his two bouts with Kazakh Gennady Golovkin, Kovalev’s power could cause him problems.

You can also read:  Mike Tyson closed 2020 by counting how he squandered $ 600 million

The Russian, meanwhile, sees the match as an opportunity to revive his boxing career.

The nicknamed Crusher lost his belts to the World Boxing Association (WBA), the International Boxing Federation (IBF) and the WBO in back-to-back losses to Andre Ward in 2016 and 2017, but regained part of the title by beating Colombian Eleider Álvarez in a rematch in February.

“I’m happy,” Kovalev said. «It is good that this is the most important fight of my career, and to face Canelo. It’s a great test for me: to prove, once again, I am the best light heavyweight in the division.

You can also read:  Mexican Guevara knocks out Filipino Clavero

Kovalev expects Alvarez to take an aggressive tactical approach, and plans to fight fire with fire. “This fight is going to be very interesting and very difficult for both of us because we never take a step back, we never give up,” he advanced.

My goal is to break your strategy. We are two great champions, and now we respect each other in and out of the ring. We will have a great fight 100%.

However, even if Kovalev manages to beat Álvarez against the odds, his joy could be short-lived. On November 25, he must be tried in the Superior Court of San Bernardino, California for assaulting a woman last year. AFP