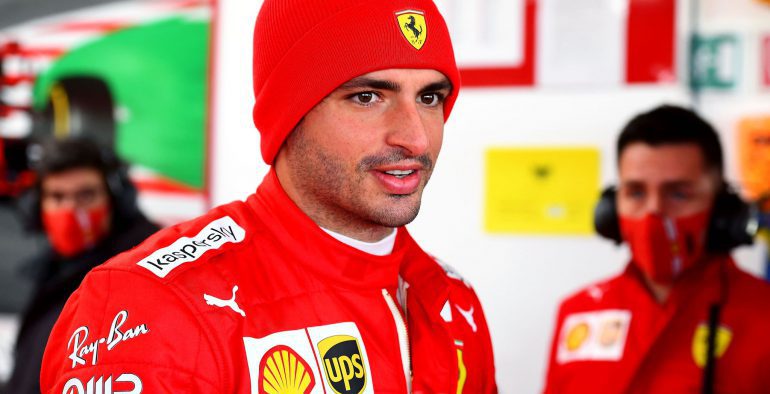 The Italian team Ferrari officially presented its driver couple for the 2021 Formula 1 season made up of the Spanish Carlos Sainz and the Monegasque Charles Leclerc.

Sainz said this Friday that he fulfilled one of his “best dreams” by signing for the Italian team, but rejected comparisons with the achievements of his father Carlos Sainz, double world rally champion, whom he considers a “pioneer” of motorsports “impossible to overshadow ».

«At Fiorano I wore the red suit for the first time, drove a Ferrari car and did it on a legendary circuit. I did all of this in one day and I will never forget it. I was anxious at first, but then the emotion left and I enjoyed the day and what was happening, “said Carlos Sainz at a closed-door press conference accompanied by Leclerc, and the director, Mattia Binotto.

Carlos Sainz, the fifth Spanish driver in the history of Ferrari, acknowledged that he dreamed of becoming a «Ferrarista» since his childhood and, despite having managed to achieve his enormous challenge, he is still far from completing his professional growth.

I will never be above my father’s shadow. He is a double world champion [de rally], something that I have not yet achieved, although it is my intention. In addition, he was a pioneer, a special driver, marked a before and after in the rally, “he said.

“It will be difficult to surpass him, even if I am part of Ferrari and I have achieved one of my best dreams. My father won two world titles, I think it is impossible to beat him, “he added.

Sainz made his debut with Ferrari in a test at Fiorano on January 27 aboard the 2018 SF71H and is optimistic about the work carried out since then, although he stressed that it is impossible to really know what kind of level his team has compared to the others. contenders before the season starts.

You can also read:  Buemi did not disappoint in Japan

The 26-year-old Sainz, together with Leclerc (23), forms the youngest Ferrari driver couple since 1968 and, despite both being highly competitive, they stressed that the good of the team will come first.

There is always a balance to find. I want to be competitive, but at the same time, especially at this time, we have to work for the team, we both want the team to grow. We are off to a good start, we have a good relationship, we spend a lot of time together in Maranello, “he said.

“I am confident in our relationship, I have never had problems with a partner and I don’t see why I should have problems with Charles,” he insisted.

Sainz, who set his deadline to be world champion at five years, acknowledged that it will be difficult to reach the first Grand Prix of the year, on March 28 in Bahrain, at 100 percent.

«My intention is to be at the maximum for the first race, but it is really difficult to reach it. It’s about experience, feelings that you win race after race. It is difficult to say when I will reach my best level. If it is from the first Grand Prix, the better, but that also depends on the feelings you have with the new car, “he warned.

For his part, Leclerc acknowledged this Friday that both he and his partner are very competitive people, but promised to separate “what happens on and off the circuit” for the good of the team.

You can also read:  The 'ice man' returns to a 'pole' nine years later

“It is clear that we must fight for the good of the team. Carlos wants to beat me and I want to beat him, but when we are in the races we will fight carefully, we will try to see what we can do for the team, “he said. «The most important thing is to separate what happens inside and outside the circuit. Outside the car we have to collaborate, and in the car, too, with strategy. Carlos is competitive, but he is here for the good of the team.

Leclerc has been working together with Carlos Sainz and the Ferrari engineers for the next season for almost two months and was satisfied with the improvements achieved, although before drawing conclusions, he said, it will be necessary to wait for the first races.

«It seems that we are taking good steps, we have worked a lot with Carlos from the beginning, we pushed hard and we see improvements. Everything seems positive, but you have to see what others are doing to understand where we are. The team is giving everything, “he said.

On a personal level, Leclerc reported that in recent weeks he has focused on analyzing his performance from last year to try to improve himself.

“We did some tests with the 2018 car, I feel ready for the new year. I’m trying to learn, to see what my weaknesses were. I was watching the past races, to see what I can do better, “said the Monegasque.

Finally, Binotto celebrated this Friday the signing of Spanish Carlos Sainz as the team’s driver and considered that the results of the last season showed that the choice was correct.

You can also read:  Márquez signs seventh pole followed in GP of the Americas

“Before signing Sainz, we saw his growth over the last few seasons, we saw how he grew and we were clear that he was a great driver, strong, with personality. We knew he would be a good partner for Leclerc, “he said. «At the end of 2020 many people congratulated us on the decision to sign Sainz. I’m happy with our choice, last season showed that Sainz is right for Ferrari.

Binotto was also very satisfied with how Sainz has adapted to the team despite not having much time at his disposal.

«Three days of testing are few, we also alternate the two drivers. We know that for Carlos it is a challenge, but every kilometer he did is important to adapt. I have to say that Carlos has grown very well, he has adapted very well, “he said. “His speed is good, we need time and we don’t expect him to be at 100 percent at the start of the season, but I think he will be ready, close to maximum. He is not an inexperienced pilot, he is a professional and will manage the situation well.

At the sports project level, Binotto acknowledged that his engineers and mechanics are working with the main attention in the 2022 season, since canceling the margin of difference with Mercedes, which dominated the last world championships, in a single year is prohibitive.

“The margin accumulated last year is high and you cannot get it back in a winter. Our concentration will be on the development of the 2022 car, it is the main objective, we will not spend much time on 2021. In 2022 there will be many changes and most of our efforts will be on the 2022 car, “he concluded. (GG) (ESPNDEPORTES)