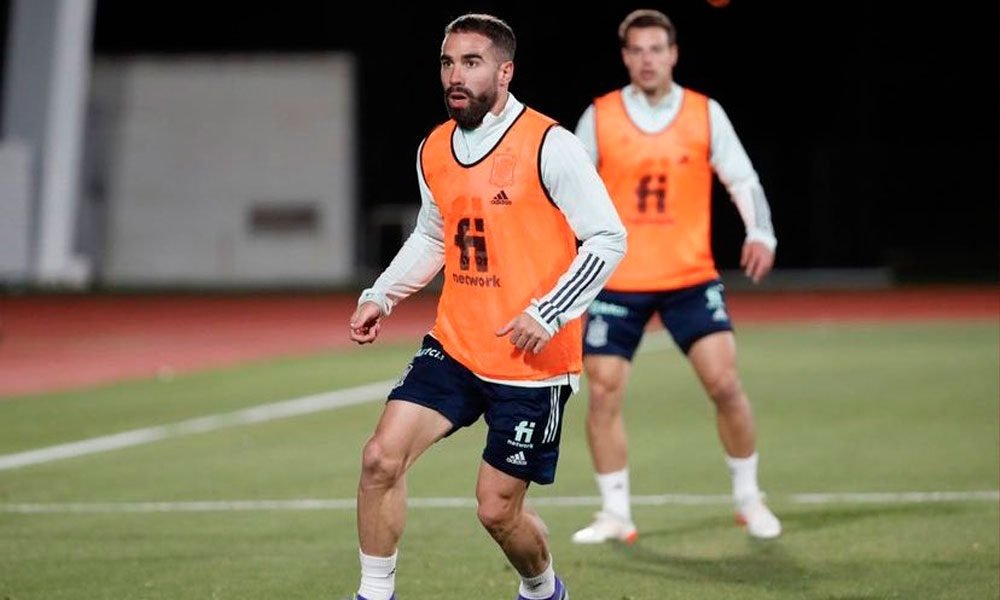 Absent for months, Real Madrid is once again represented in the Red with right-back Dani Carvajal in the face of two crucial games for the World Cup in Qatar-2022, the first against Greece on Thursday.

235 days have passed since the last time that the Spanish coach, Luis Enrique Martínez, called up a Real Madrid player, an eternity if one takes into account the historical weight of the merengue club in Spain and in La Roja.

The last time a Madrid player wore the national shirt was on March 21 and it was the defender and national captain now at Paris Saint-Germain Sergio Ramos (still injured).

For Dani Carvajal, 29, the wait has been even longer. The Real Madrid right-back had not been called up since September 3, 2020, more than a year ago … But he has returned for the matches against Greece and Sweden, in which Spain could seal its qualification for Qatar-2022.

– The burden of injuries –
Last summer, for the first time in its history, Spain played a great competition without any merengue player among its ranks: a European Championship in which it reached the semi-finals, where it fell on penalties against future champion Italy.

You can also read:  FIFA opens file for racist insults against English footballers in Hungary

And then, for the international window in September and the final four of the Nations League in October, Luis Enrique, who always defends that he leads the Red to the most fit, did not call any Real Madrid player either.

Last Friday, when giving the list for these games, Luis Enrique, recalled regarding Carvajal that “there has been no list in which if he had not been injured, he would have been absent.”

“I don’t think the coach is looking at the shirt worn by each selected player to be here,” said Carvajal on Tuesday on Cadena Ser.

You can also read:  Dani Alves: «I am half Brazilian and half Spanish»

Often injured in the last two years, Carvajal has returned, but will have to fight to regain his starting position in the Red, especially with César Azpilicueta, who has owned the position since the European Championship.

The Madrid player (25 caps) has not hesitated to change his habits to return to the highest level after the tunnel of injuries he has gone through.

«The most complicated part is the head, it is what controls everything. Trying to assume or seek the cause of this negative period on the subject of injuries has been my greatest concern, “Carvajal said at a press conference on November 2.

“To this day I feel very well, clean in the head, on top and with a lot of desire and encouragement and with a positive mentality, I am sure that everything goes very well,” he added.

You can also read:  Switzerland to the World Cup and condemns Italy to the play-off

«I have closed doors on the things that could affect me: training, rest, food … I have a weirder and more strict diet, without gluten, without wheat. As if I have to eat broccoli every day to be well, “joked the side.

Trained at Real Madrid, Carvajal now has the mission of being one of the guides of the talented young Spanish generation, heading to Qatar-2022, in which there are many representatives of Barça.

Eric García, Jordi Alba, Gavi, Sergio Busquets and Ansu Fati were part of Luis Enrique’s initial list, before Fati and Eric García were injured in the match against Celta de Vigo on Saturday in the League (3-3).

Carvajal, who has never won anything with the senior team, will have one goal in mind: to ensure his presence in the group that will travel to Qatar from November to December 2022 to finally win a trophy with his country. AFP (HN)