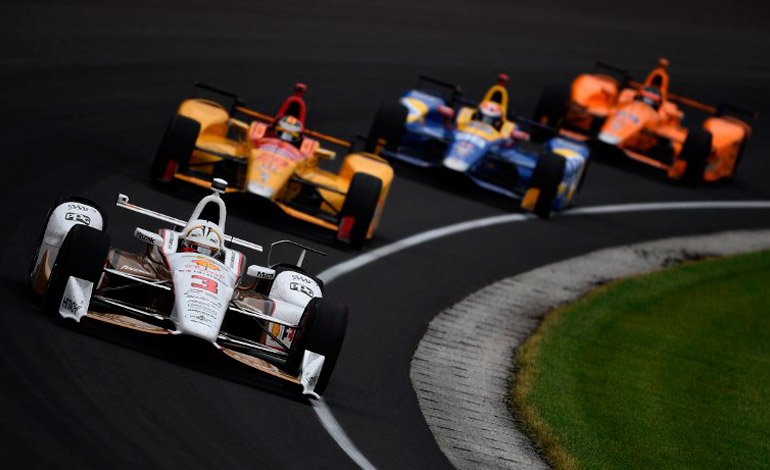 Brazilian driver Helio Castroneves was again less than a second away from claiming his fourth title in the legendary Indianapolis 500 race, which reached the 101st edition.
Only five laps separated him from the triumph that would have placed him alongside the legendary four-title winners AJ Foyt, Al Unser and Rick Mears.
But Castroneves, as he had advanced in an interview with the EFE Agency during his visit to Houston, had a brilliant career, full of intelligence, a great strategy, a team that did an enormous job, but in the end lacked the luck factor, that it is also necessary when defining the winner.
It did not matter that Castroneves started from position number 19, on row seven of pole, the Brazilian rider, as anticipated, made use of class, patience and little by little he went up to leave all the most important rivals behind.
In the end, although he tried in the last five laps to overtake the Japanese Takuma Sato, he could not do it, but the 42-year-old, 17 starts at Indianapolis, was once again the best of the Penske team and the only car with a Chrevolet engine. , that you could compete with the Honda, that it was the winner.
It is true that he did not get the title that would have made him more immortal than he already is as an IndyCar driver, but at 42, Castroneves with the 96 points he received as second classified is already the leader of the general in what going into the IndyCar season (245 points).
“I was honestly convinced that we could win, but in the end it could not be, although the whole team has done an exceptional job in achieving the biggest comeback in my career in terms of the start,” said Castroneves, who was proclaimed champion. of the Indianapolis 500 in 2001, his rookie year, in 2002 and 2009. “Now to think about the next race.”
But if Castroneves shone in a special way, so did five other Latin American pilots who competed and were among the top 15, including four among the top 10, something historic and that had never happened before.
His compatriot Tony Kanaan, champion in the 2013 edition, also competed to the maximum with the Ganassi Racing chip team and Honda engine to occupy the fifth position and always be in the fight for victory.
Castroneves had already predicted that his compatriot would have a good race because of the class he has as a driver and because of the good Honda engine that his car had.
After the entry of Kanaan, 42, another legendary Latin American driver, Colombian Juan Pablo Montoya, who returned to IndyCar competition for the most important race of the year in the United States, followed him across the finish line and demonstrated once more than that he is an exceptional pilot with great class knowledge.
Montoya, 41, winner of the 2000 edition as a rookie and the 2015 edition as a great veteran, returned to race with the Penske team and Chrevolet engine, to occupy the sixth place
His compatriots, the young values ​​Gabby Chaves, 23, who raced with the Harding Racing team, entered in ninth place, while Carlos Muñoz, 25, who did it with that of AJ Foyt Enterprises, was 10th.
Both Chaves and Muños confirmed that they continue to grow as pilots are the guaranteed future that the motoring Colombian and Latin American have within the IndyCar competition.
Not forgetting another young Colombian talent, the 26-year-old driver Sebastián Saavedra, who also had a great race and with the Juncos Racing team car, he ranked 15th.
All of them improved their positions in the general classification of the IndyCar series.
It is true that the Japanese driver Takuma Sato was proclaimed winner of the 101st edition of the Indianapolis 500 and the Spanish Fernando Alonso was the unexpected star of Formula One who was in charge of selling tickets and image, although in the end he could not finish the race by breaking the Honda engine of his car.
But those who really made history and were always protagonists throughout the most important race of the automobile calendar in the United States were two Brazilian drivers and four Colombians.

You can also read:  The Toyota No. 7 of 'Pechito' López breaks the curse at the 24 Hours of Le Mans