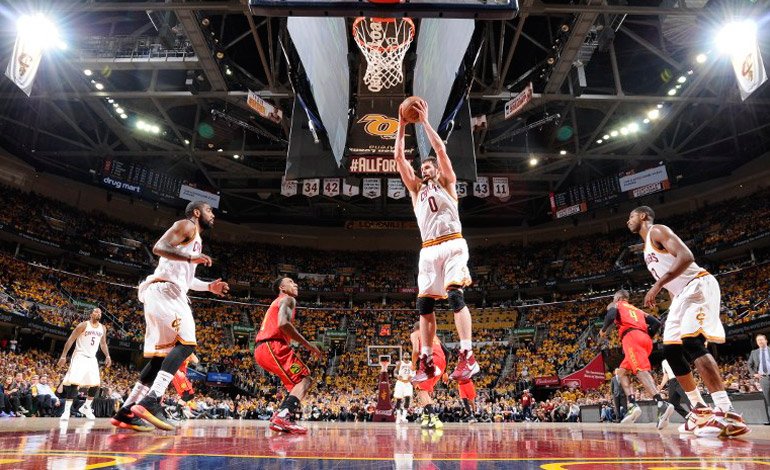 The Cleveland Cavaliers began the Eastern Conference semifinal series with a hard-fought win over the Atlanta Hawks, while the Oklahoma City Thunder vindicated themselves against the Spurs with a road win that tied the series (1-1) in that of the West.
The combination of star forward LeBron James and point guard Kyrie Irving was the key to the Cavaliers’ attack. who beat the Hawks 104-93.
James was the top scorer by getting 25 points in the 40 minutes he played, with 11 baskets from 21 field goals, including 2 of 4 triples, and 1-1 free throws, he distributed nine assists and grabbed seven rebounds, which They were all defensive.
Irving reached 21 points, including three triples in five attempts, and power forward Kevin Love got a double-double of 17 points and 11 rebounds.
Center Tristan Thompson emerged as the leader in the inside game by capturing 14 rebounds after sharing his actions equally on both sides of the court.
The Cavaliers were in control of the game until the final stretch of the third period, when they had a partial advantage of 18 points (72-54).
James was in charge of starring in a three-point play with 2:09 minutes left and, together with two more offensive rebounds, prevented the reaction of the Hawks, who lost the ninth straight playoff game against the Cavaliers, the second longest streak against the same team in the final phase competition.
The German reserve point guard Dennis Schroder with 27 points –the best record in the playoffs–, six assists and five ball recoveries, was the best scorer for the Hawks, and his contribution at the end could not generate the surprise nor was it enough for the victory.
Power forward Paul Millsap had a double-double of 17 points and 13 rebounds that put him in front of the Hawks in the inside game.
Forward Ken Bazemore also had a double-double of 16 points, 12 rebounds and four assists.
Dominican center Al Horford was still not a decisive factor in the inside game and in the 36 minutes he played he reached 10 points after scoring 4 of 13 field goals, missing a triple attempt and hitting 2-2 from the free throw line .
Horford, who played in game number 71 of the playoffs – the best mark in team history – grabbed six defensive rebounds, gave one assist, recovered two balls and made three blocks.
Game 2 of the semifinal series will be played Wednesday at Quicken Loans Arena in Cleveland.
This time, yes, point guard Russell Westbrook and forward Kevin Durant combined in class and scoring inspiration and were the leaders who guided the Thunder to the away win (97-98) against the Spurs in the second game of the series that tie to 1-1.
Game 3 of the best-of-seven series will be played on Friday in Oklahoma City.
After losing the first game by a 124-92 blowout, Westbrook with 29 points and Durant who scored another 28 led a list of five players who had double-digit numbers and allowed the Thunder to always be ahead on the scoreboard.
Westbrook also had a double-double by getting 10 assists and grabbed seven rebounds, which left him as the most complete player on the team.
Durant also responded with seven rebounds and four assists, but it would be New Zealand center Steven Adams who emerged as the surprise factor by becoming the Thunder’s best inside game.
Adams posted a monumental 12-point double-double while going 5-for-6 from the field and 2-for-2 from the free throw line, while completely dominating inside the paint by grabbing 17 rebounds and putting up a block in 37 minutes he saw action.
The Hispanic Congolese power forward Serge Ibaka also did a great job as a team by scoring another 12 points in the 33 minutes he played.
The Spanish international also took the last possession of the ball as players from both teams battled it out under the Thunder’s basket as the Spurs tried to get the points that would have given them victory.
Swiss reserve center Enes Kanter contributed 12 points, eight rebounds and three blocks, which also helped the Thunder to win and the Spurs to suffer, at their field of the AT&T Center, the second defeat so far this season.
The controversial play came with 13 seconds left in regulation time and shooting guard Dion Waiters in his attempt to lose the ball pushed Argentine guard Manu Ginóbili, in what could have been a personal foul.
But the referees did not point it out and let the action continue that ultimately allowed the Spurs to recover the ball through shooting guard Danny Green who stole it from Durant.
The Spurs, with Ginóbili in charge of the ball, passed it to Australian point guard Patty Mills who missed a three-point attempt and power forward LaMarcus Aldridge could not capture the ball, nor could forward Kawhi Leonard before the buzzer sounded because the one who kept it was Ibaka.
Aldridge was once again the leader of the Spurs’ attack by contributing 41 points and eight rebounds, but Leonard this time did not shine in the offensive game by keeping only 14 points, without being able to be a winning factor. EFE