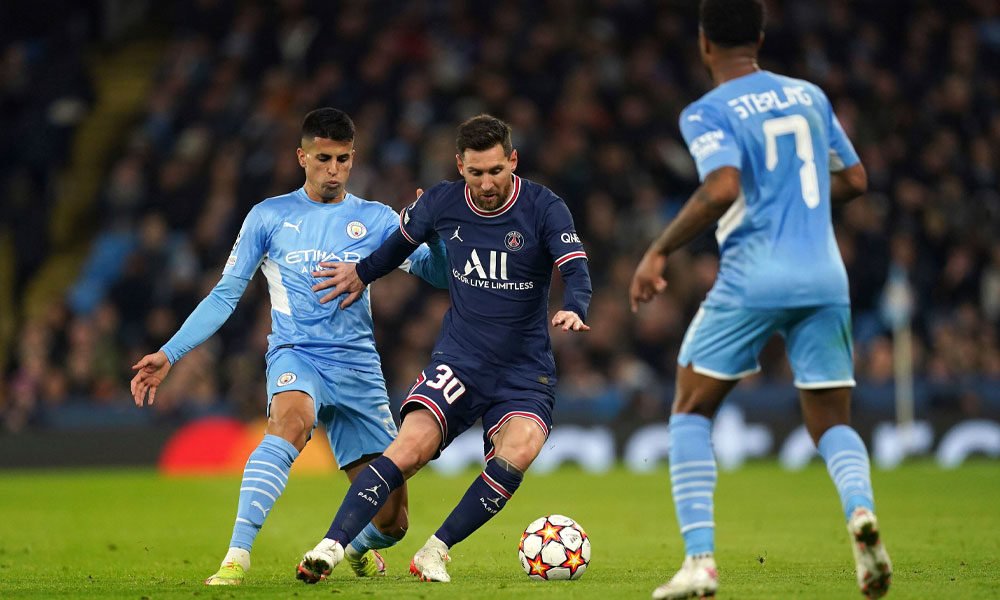 The pot of luck ran out for Paris Saint Germain, who lost 2-1 on their visit to England against a much superior Manchester City, but had to overcome a lightning bolt from Kylian Mbappé with goals from Raheem Sterling and Gabriel Jesús (2 -1).

Pep Guardiola’s team threatened to pay for the lack of punching again, but he relied on his combinatorial game until the end to beat a PSG that trusts everything to Messi, Neymar and Mbappé and that was close to receiving a prize that would have been unfair.

With PSG split into two blocks, the top three, anchored in the center of the field, and the rest of the players defending, City enjoyed exceptional first minutes, feeling like owner and lord of the game. Similar to what happened in Paris and with the same luck in front of goal.

Kimpembe had to put out the first fire when he got a header from Rodri on the goal line, but City did not stop creating and showing that if they had signed a ‘nine’ like Harry Kane in the summer, they would be the masters of Europe. But without Kane and with Foden out, City had everything on the field except the last touch.

You can also read:  Mancini: France are still favorites

Mahrez was the most active and the one who had the goal in his boots on two occasions. The first after a heel hit between two defenders, a cut to the inside and a shot with a thread that deflected Hakimi just enough, the second with a low shot that took Navas to the ground and stretched his mitt.

The clearest was arranged by Gündogan. After a very dangerous cross from Cancelo and a terrible clearance from Mendes, the German adjusted the ball to the post, which spit it out to the disbelief of Guardiola on the wing. In this context of total domination, the City only had to wait for a defensive transition or a mistake. That is why when Neymar stole Gündogan’s wallet in the middle, he quickly took off the attack, with a ball in depth so that Mbappé was outlined towards his right leg and sent it to the clouds.

It was the warning of a PSG that did not need more. City had the team, the structure, the tactics; they had the punch. After 45 minutes of siege, PSG needed five to make a difference. The French are a lion who chooses when to attack.

You can also read:  Bayern Munich of 45 goals in 9 games visits Frankfurt

Messi, from the front, was associated with Herrera, his wall a thousand times seen. From the lane of ‘eight’, he put a center that had to circumvent the legs of four City players. But the ball touched Walker first, totally changing the trajectory and lying in the boots of Mbappé, who prepared the shot and made the first shot between Ederson’s legs.

It was both a miracle and a carbon copy of what was seen in Paris. Again City against the ropes for their lack of goal. But the complacency of Mbappé, Neymar and Messi, watching City build plays without pressing or defending, ended up taking its toll.

Neymar did not follow his pair, Rodri hung the ball for Walker’s entrance on the wing and he padded the ball for Jesús to brush against it, chased by the centrals, at the near post, and Sterling, alone and stretching, pushed it into the second.

The passivity of the trident only found sense in some isolated spark like the one that led Neymar to throw a wall with Di María, avoid the entry of Rodri and define a deflection in front of Ederson.

Neymar had lost his opportunity and Gabriel Jesús, in response, let him know. Another combination from the defense, another pass to the back of the wings, Bernardo, only cutting to the inside, positioning it to the center and Jesús, in one touch, for 2-1.

You can also read:  Milan will lower the price of their tickets for Champions League matches

Justice was served at the Etihad, the best won and not the one with the best players. A City won that is a better block, a better team and that with only one of the three that PSG has at the top, would dominate Europe without problems. Guardiola’s men also ensure a pass to the round of 16 as group winners; the Parisians will be second.

Incidents: Match corresponding to the fifth day of Group A of the Champions League played at the Etihad Stadium in Manchester)