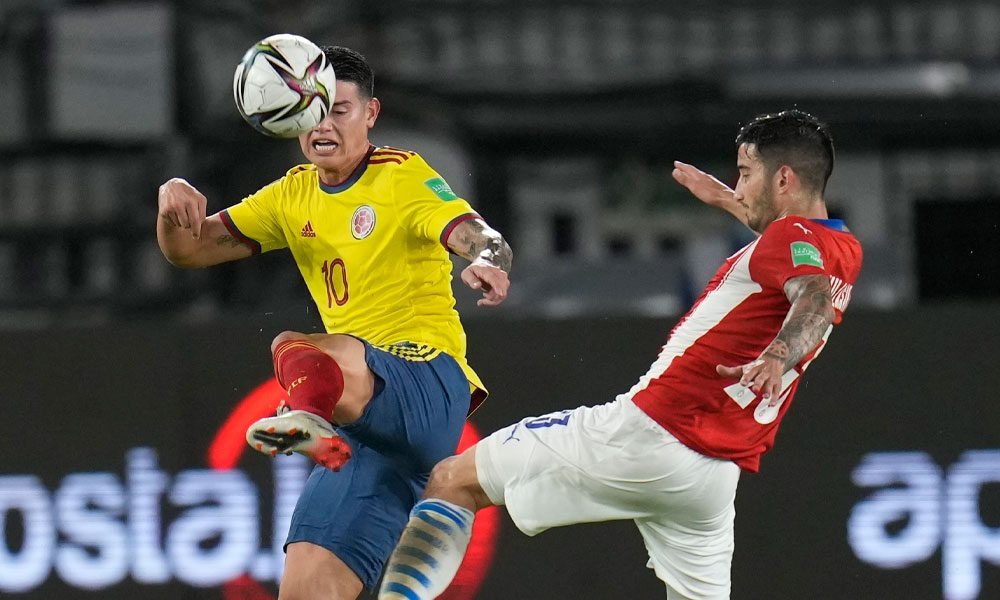 Colombia and Paraguay equaled 0-0 at the Barranquilla Metropolitan Stadium for matchday 14 of the World Cup Qualifiers, a match in which both stagnated and that leaves those led by Guillermo Barros Schelotto with almost no possibility of going to Qatar.

The coffee growers accumulated their fifth consecutive game without scoring and without winning, but they maintained the fourth place with which they started this double day.

However, those led by Reinaldo Rueda have the same points as Peru, which is fifth, and one more than the teams of Chile and Uruguay that are sixth and seventh, respectively, when the difference was greater last month.

The visitors fell back from the first moments and the locals tried to settle on the opposite ground under the leadership of James Rodríguez, who began to join Luis Díaz, Luis Muriel and Miguel Borja.

Despite this, Rueda’s team did not have much clarity and found a rival who, hampered by injuries, appealed to the speed and creativity of Miguel Almirón to damage the counterattack.

You can also read:  "Barcelona has over 20 million to sign players": Tebas

Along these lines, the Colombians had several approaches with shots from Borja, while the Paraguayans reached the goal of David Ospina with heads on corner kicks.

The clearest of the coffee growers was Diaz in a great individual play down the left side that ended with a shot from the edge of the area that Antony Silva saved.

Meanwhile, the Albirroja, in one of the last plays of the initial stage, had the clearest of the match when Carlos González took advantage of a blunder by Davinson Sánchez and enabled Almirón, who took a very strong shot that crashed into the right post of the Arch of Ospina.

For the complementary stage, Rueda moved the board and sent midfielder Víctor Cantillo and forwards Duván Zapata and Diego Valoyes, who made his debut with the tricolor jersey, onto the pitch.

In this context, James threw himself into the center lane and there he began to be a headache for the Paraguayan midfielders and defenders. The Al-Rayyan player had his first clear chance in minute 57 with a mid-range shot that brushed past Silva’s left post.

However, the context left open a hole in the center of the field that Paraguay tried to take advantage of the counterattack, without success, since González, Almirón and Braian Samudio, who weighed little, could do little when they received the ball.

As the minutes passed, the game became entangled for both. On the one hand, Colombia lost clarity and depended a lot on its individualities, while Paraguay maintained its creative problems, despite the fact that Braian Ojeda and Luis Amarilla entered to try to do damage on local ground.

In the last minutes, Rueda’s urgent team turned to attack and took advantage of Andrés Cubas’ expulsion at minute 84, with a double warning, to put Albirroja in their own field.
Despite the clear opportunities of Zapata and Valoyes, Colombia did not manage to end its drought and today its worst enemy in the fight for a place in the Qatar World Cup is its lack of effectiveness.

You can also read:  "There was no sporting reason" for Benzema's absence, says Kroos

Referee: the Argentine Facundo Tello. He sent off Cubas for a double yellow at minute 84 and admonished Balbuena, Cuéllar, Lerma and Valoyes.

Incidents: Match of the fourteenth day of the South American qualifiers of the Qatar 2022 World Cup played at the Metropolitan Stadium in Barranquilla. EFE (HN)