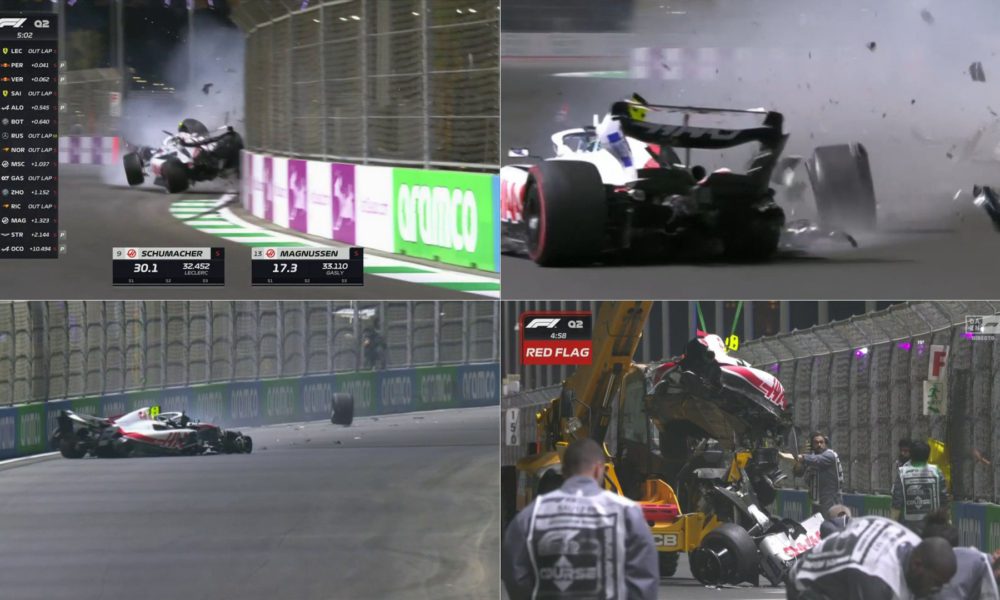 Formula 1 lived hours of maximum concern after the violent crash suffered by the German driver Mick Schumacher, son of seven-time champion Michael. During qualifying, the Haas driver lost control of his car, which was completely destroyed.

“We have heard that Mick is conscious, out of the car and currently on his way to the medical center,” his team limited himself to reporting minutes after the violent crash. The broadcast decided to show the scene of the accident from afar as the pilot was removed from the car and loaded into the ambulance that took him off the runway located in Jeddah, Saudi Arabia.

“Mick Schumacher has been evaluated at the Medical Center. Evaluation revealed no injuries. He has been transferred to the King Fahad Armed Forces Hospital for preventive checks, ”F1 reported almost an hour after the fact. “I spoke with his mother and kept her informed. He has no injuries that can be seen, but they want to do some scans to make sure there is no impact, ”said Guenther Steiner, director of Haas.

The 22-year-old German driver, who lives with his second season in Formula 1, had managed to get around Q1 and was positioned in 9th place in Q2 with about five minutes remaining for the close of the session. Mick lost control at turn 12 and hit the wall head-on. The image was shocking: the vehicle lost two tires and was destroyed on one of its sides.

You can also read:  Renault could lose its Formula 1 team

With the red flag that canceled the activity, television applied the protocol of showing the scene from afar and it was only possible to visualize how the assistants worked with the athlete, beyond the fact that minutes later his team briefly commented that Schumacher was conscious. He immediately he was transferred to the medical center located in the circuit of Saudi Arabia. The ferocity of the impact was such that when the employees tried to remove the Haas from the track with the machinery, the car began to disarm.

The qualy was suspended for an hour until the runner was removed from the circuit and all the remains of the car that had been scattered on the asphalt were cleaned.

More than half an hour after the crash, and after being treated by the doctors stationed at the circuit, he was transferred to a hospital in the area by helicopter: the TV took him when he was on the stretcher and was talking to an assistant from his team. “Mick is physically in good condition, but he will be airlifted to the hospital for further preventative checks,” they added from Haas.

You can also read:  Schumacher skied at "normal" speed

Qualifying had come in for a big surprise minutes earlier when Lewis Hamilton failed to make it out of Q3 and was knocked out of the first phase for the first time in five seasons. The Mercedes driver was one of five eliminated along with Yuki Tsuonda (AlphaTauri), Nicholas Latifi (Williams), Nico Hülkenberg (Aston Martin) and Alex Albon (Williams).

Until the moment of the Schumacher accident, Esteban Ocon, Lance Stroll, Kevin Magnussen, Daniel Ricciardo and Guanyu Zhou were being eliminated. Finally, with the time he signed in qualifying before his brutal impact, Schumacher was placed 14th in the qualifier above Stroll, who was unable to overtake him. In any case, and beyond the fact that Schumi Jr. left the hospital after the fact, Haas announced that he will not race on Sunday.

Mick had just finished in 11th place in the Bahrain GP that marked the debut of the 2022 season and exhibited his best career in Formula 1. Schumacher reached the Top as one of the stars of the Ferrari Drivers’ Academy and after be champion in Formula 2 of 2020 at the helm of a Prema Racing.

Haas, which has Ferrari engines, started the year with a brilliant performance led by Kevin Magnussen, the Danish driver who returned to the team to replace Russian Nikita Mazepin, who was fired as a result of his country’s war with Ukraine. .

It should be noted that Mick’s father, Michael Schumacher, has been under medical care since December 29, 2013 when he suffered an accident while skiing. The health of the legendary German runner, one of the best in the history of the divisional, has been a mystery since then since his family decided to protect him and submitted to strict secrecy, so little information has been known about the current state of the. (Infobae)