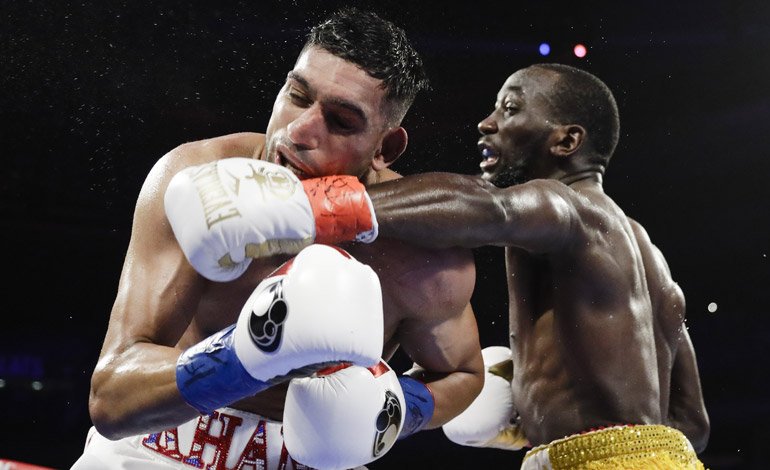 Terence Crawford dropped Amir Khan when they were barely carrying a few punches.

The punch that ended the fight was under the belt.

Crawford retained his welterweight title by TKO on Saturday when Khan was unable to continue after taking a low blow in the sixth round.

Crawford struck Khan with his left hand on the right hip, and his opponent retreated to his corner in pain. After trying to overcome the pain for a few minutes, his team told the referee that Khan was unable to continue.

“I saw that it was breaking him down. It was a matter of time, ”Crawford said.

It was a strange and unsatisfactory ending to ESPN’s front-line video-on-demand match, sparking boos from the crowd who had bought 14,091 tickets at Madison Square Garden. The final left jab left Crawford and promoter Bob Arum plenty of time to talk about the next fight they want to organize.

“The match I want now is Errol Spence,” Crawford said. “When you’re ready, you can come for it.”

Crawford (35-0, 26 KOs) had knocked out Khan in the first round, but the later rounds had been competitive, with hard shots coming from close by from both fighters.

Referee David Fields did not appear to see the last low blow to Khan (33-5). Khan could have taken five minutes to try to recover, but his coach, Virgil Hunter, made the decision earlier.

“I didn’t want to send him back there without his legs right,” Hunter said.

“I was disappointed that the team stopped the fight like that, but Virgil is a great coach and he was taking care of his fighter,” Crawford said. “I know he didn’t want to lose like this.”

Arum believed that Khan could have continued.

“He had five minutes to recover,” Arum said. “It was an accidental low blow. He could have recovered (…) But he was looking for a place to fall ”.

Khan, a 2004 Olympic silver medalist for Great Britain, was seeking what would have been the biggest victory of his professional career. The former 140-pound champion could have sought a match with fellow countryman Kell Brook, perhaps a more lucrative and affordable fight, but instead seized the opportunity to face Crawford of Omaha, Nebraska and considered one of the best boxers of the moment. AP