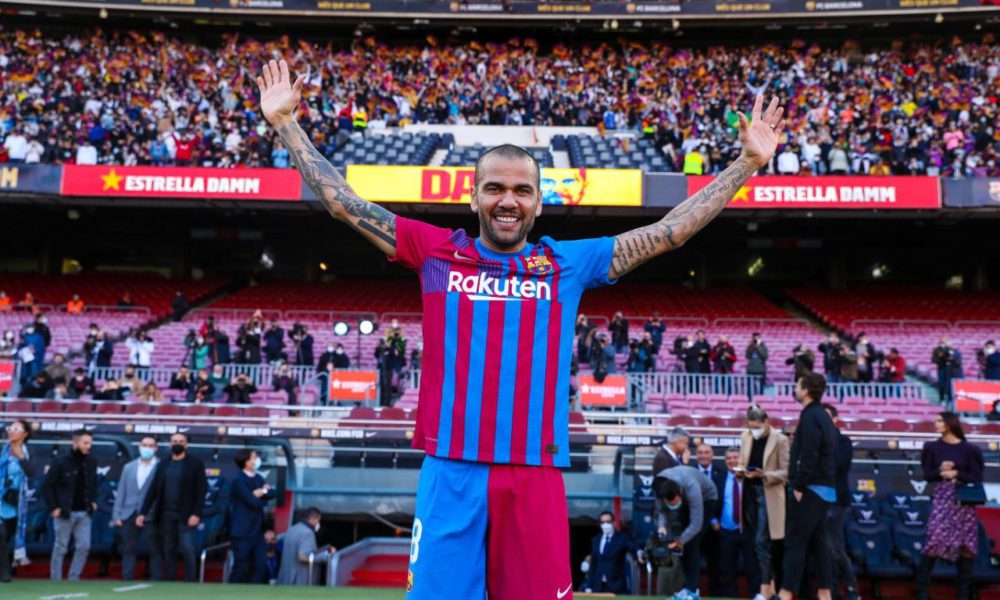 Dani Alves was once again the star of a particular presentation ceremony at the Camp Nou. More than 13 years after the start of his first cycle, his second stage at FC Barcelona has started with an event attended by thousands of club fans and where the 38-year-old Brazilian side set his stamp with a very particular and some phrases that generated the ovation of the public.

“The dressing room is now better, without a doubt, because I am here,” said Alves in the presence of 10,378 people who saw him smile and chanted his name in the stands. “There are young people with enthusiasm, and those of us who have more mileage have to join forces with theirs. We can only improve and do this together ”, he deepened.

One of the most striking aspects was that the Brazilian soccer player wore an elegant suit but on his feet he wore “flip flops”. Many were surprised by its strange look but some quickly understood the message behind it.

His intention was to repeat the tradition of the beginning of his first stage, which began in mid-2008, when he also appeared at the Barça offices in flip-flops. “Many things can change, but others not,” he said in a video for social networks. They also showed pictures of him smelling the stadium grass. “It smells of titles, it smells of glasses and stuff,” he said.

❝Thanks Dani for coming back to Barça. Today is a day of great emotion. Today we have seen that Barça fans want it. He has earned it. Also, he is a physically gifted person❞

Even later, he went barefoot to the Camp Nou pitch to sign the contract until 2022 with President Joan Laporta: “Now I am a little more handsome. But there are things that we cannot change, and stepping on this grass again could not be otherwise than like this, barefoot. Here I have become very big and now I am coming back a little small to make this club bigger. We need them all, because this club is not mine, it is not the ‘presi’, it is ours. Those of us who feel the colors and the shield, it is time to be together and put Barça up again. “

Dani Alves, who was released from São Paulo in September, will not be able to make his debut until January but has already started training with his teammates and under the orders of Xavi Hernández. After his first sessions, he has shown a lot of confidence to see FC Barcelona fight at the highest level again.

“I am sure that if we join forces and begin to be positive and know that things are achieved with work, we will once again be more than a club. You, with this club, have made me feel very special, to be one of you and this has not changed. I am here because I am one more. Visit Barça and visit Catalunya and visit the mother who gave birth to all of you ”, he declared.

In this second stage, a new number will be released. He already wore the ‘2’, ’22’ and ‘6’ during his first cycle, but now he will wear the shirt with the ‘8’ on the back in tribute to Hristo Stoichkov and Andrés Iniesta, he said.

For his part, Joan Laporta assured, as on the day of Xavi’s presentation, that it was another historic day for the club. “Dani (Alves) is an extraordinary person of exceptional talent. I have to say that our coach, technical secretary, board of directors and I are delighted to bring spirit, character, and I am sure that Alves will make this team much better. All this is impressive ”, he assured in reference to the warm welcome that they gave to a player very loved by the culé fans. (Infobae)

🎙 Dani Alves: “We need, again, to be obsessed with having the ball. This is what makes Barça different” pic.twitter.com/6uQCmP5OqC