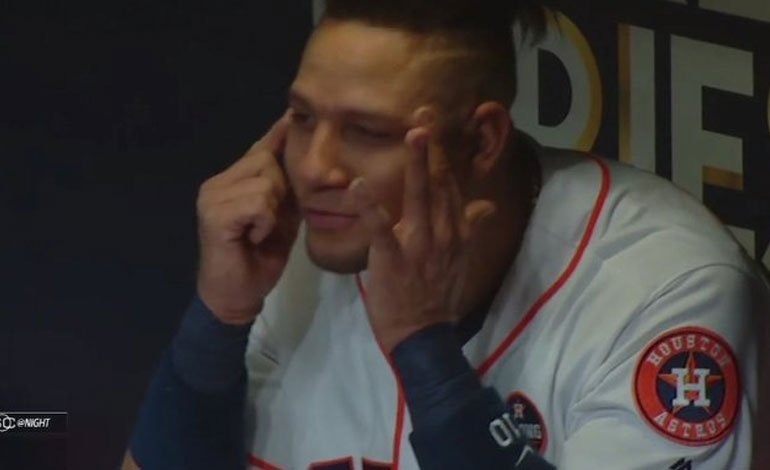 Cuban slugger Yulieski Gurriel of the Houston Astros was suspended five games for the 2018 Major League Baseball season for a racist gesture directed against Dodgers pitcher Yu Darvish of Japan, the organization announced on Saturday.

The measure, however, does not prevent him from continuing in the World Series dispute, in which the Astros lead 2-1 over the Dodgers.

Television cameras showed Gurriel on Friday putting his fingers to the outer edges of his eyes and stretching his skin as he sat in the dugout after hitting the Asian’s home run.

Gurriel, a Cuban who played in Japan for the Yokohama BayStars in 2014, homered in the second inning off Darvish of the game the Astros won 5 × 3 the day before to go up on top 2-1.

You can also read:  Detroit Tigers prepare tribute in style to Miguel Cabrera

His homerun began a four-run outburst, forcing the 31-year-old Japanese star to leave the game after one and two-thirds of innings, in the shortest start of Darvish’s career.

“He made a mistake,” said Darvish. You will learn from that. We are all human beings, “added the Asian.

“Acting like this was disrespectful to people around the world,” Darvish said through a translator.

Gurriel, who later apologized to the Japanese, explained that he made the gesture because he had never been successful against Japanese pitchers in the past.

“Yesterday I commented that I had not had much luck with the Darvish pitcher over the years and the action was that I said that I hope he saw me like them (the eyes) so that he would throw me a comfortable pitch. At no time was it an offensive gesture, on the contrary, I have always had a lot of respect for him, “said Gurriel.

– Manfred sympathizes with Darvish –
MLB commissioner Bob Manfred said he did not sanction the 33-year-old Cuban from the World Series, in part because he did not want to punish the entire Astros team for the actions of one player.

“I understand that people will have different points of view, but I thought this moment was appropriate,” said Manfred.

Manfred said it was also partly because Darvish, who suggested calm rather than anger, asked that people learn from the “disrespectful” gesture and wants to get over the incident as quickly as possible.

“He (Darvish) handled this with the same class as a professional gamer,” Manfred noted.

You can also read:  Joven predicted 23 years ago that the Cubs would win the 2016 World Series!

Gurriel also added that “I didn’t want to offend anyone in Japan. I have a lot of respect for Japan. I never intended to make an offensive gesture.

However, Manfred said that racist gesture should be punished with a ban greater than the usual, which is two or three games.

“There must be disciplinary consequences to make it clear that Major League Baseball will not tolerate these behaviors,” concluded the commissioner.