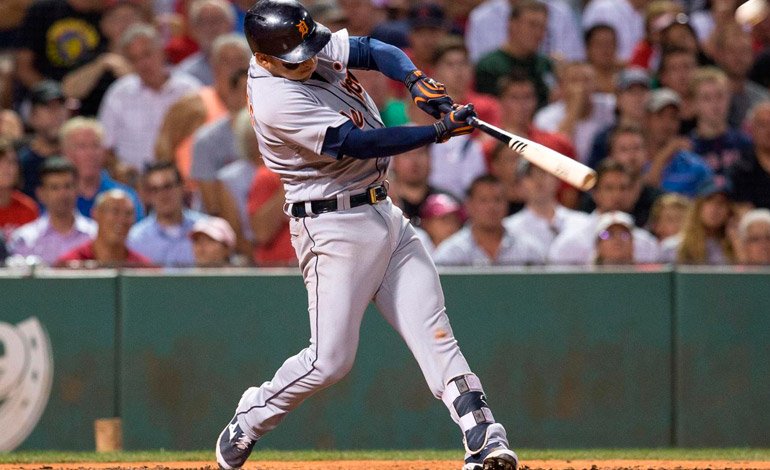 Cuban José Iglesias hit a two-run homer in the sixth inning and right-hander Justin Verlander worked six solid innings for the Detroit Tigers to beat the Boston Red Sox on Monday in the Major Leagues with a score of 4×2.

Venezuelan designated hitter Víctor Martínez and catcher James McCann also drove in a run each for the ‘cats’, who are now five and a half games behind the Cleveland Indians, leaders of the American League Central Division.

For his part, Verlander (10-6) worked excellently, allowing only one run and five hits with five strikeouts given, to complete a record of 3-0 in his last five starts.

You can also read:  Gerrit Cole after record of wins in a row

Venezuelan closer Francisco Rodríguez hung up the scoreless in the ninth for his 28th save of the tournament.

The setback was for pitcher Drew Pomeranz (8-8), recently acquired by the “redheads” from the San Diego Padres.

Pomeranz allowed four hits, one of them Iglesias’ homer.

In Baltimore, center fielder Adam Jones scored the winning run in the tenth inning after a soft throw to the plate by pitcher Jordan Lyles, for his Orioles to beat the Colorado Rockies 3×2 in an Interleague game.

Lyles (2-3) was charged with the disaster after his own error, while the victory went to fellow reliever Chaz Roe (1-0), who pitched the tenth inning blank.

You can also read:  Former Dodgers Miguel Rojas agrees to extension with Marlins

The Rockies wasted a four-corner hit by Puerto Rican-Cuban Nolan Arenado, his 26th of the season, but the team conceded its fourth straight loss.

The Mexican starters duel between Yovani Gallardo (Orioles) and Jorge De La Rosa (Rockies) ended in a no-decision in a game in which the latter was looking for his 100th victory in the Majors.

A Mexican who did win was reliever David Hernández (2-3), who preserved the victory for the Phillies over the Miami Marlins with a 4×0 shutout.

You can also read:  La Russa returns to the playoffs, now with the White Sox

The offensive contribution was an RBI double by Tommy Joseph in the eighth, against Dominican reliever Fernando Rodney (1-3), who, however, had gotten the first two outs, but then walked Michael Franco from Dominican Republic. (AFP)