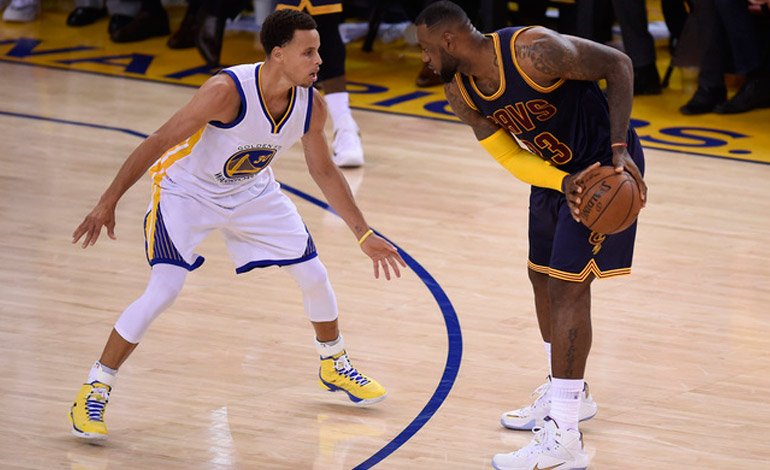 What all good basketball fans had dreamed of came true, seeing the Golden State Warriors, the current league champions, against the Cleveland Cavaliers, who were also their rivals last season, in the NBA Finals .
As leaders of the dream duel-rematch will be point guard Stephen Curry, the player who during the regular season and so far in the playoffs has been the great figure of his team and also of the NBA, taking away the prominence and the halo of untouchable with which “King” James walked for the best ball in the world.
That reality is what has made James aware, that the rival to beat on an individual level is none other than Curry, the Most Valuable Player (MVP) award that he won for the second season in a row and by unanimous vote, something that nobody had achieved so far.
James did not know how to assimilate Curry’s success well and questioned the value of the award and being the true number one in the league, to which Curry responded with indifference, diplomacy and emphasizing that his growth has been increasing because he has never listened or You have been worried about what others say.
The NBA star doesn’t want to admit that there is any such concern on his part as he is threatened by Curry of losing his status as the NBA’s face for the past decade.
A second consecutive matchup for the title between the two players does not keep either of them awake at night, although they admit that they have the utmost respect for their respective sporting careers.
“It really is something that bothers me. That’s not what I play for, I’m not looking to be the face of the NBA or this or that, or take the throne from LeBron, or whatever,” Curry said Wednesday, a day before the Warriors host the Cavaliers in the first game. game on their field at Oakland’s ORACLE Arena. “You know, I try to get rings, that’s what I want. That’s where, for me, the conversation ends.”
Curry made it possible for the Warriors to win the league title after a 40-year drought and did so at the expense of James, who was seeking the glory of giving it to Cleveland for the first time, a mission for which he left the Miami Heat.
As Curry’s image grew in the Warriors’ title hunt, James went to great lengths to proclaim himself “the best player on the planet” during the Finals.
It is true that he played as such, with averages of 35.8 points; 13.3 rebounds and 8.8 assists, but without point guard Kyrie Irving who was injured early in the series and the absence of power forward Kevin Love, the most James could achieve with his heroic individual game was to extend the competition to six games (4-2).
Now James and the Cavaliers have arrived in Oakland complete, with Irving and Love in top form, and the Cleveland star has also done so with a message of complete acceptance of Curry’s status as a “true” MVP of the league.
“Steph (Curry) was definitely the MVP of our league,” James stressed. “You guys do the rivalries and I think it’s great for the sport of basketball, as it is when you talk about Carolina-Duke and Ohio State-Michigan.”
What is true is that both have been responsible for transforming the league in different ways, each of them have saved an NBA competition that is more than questionable in many aspects regarding the game of most teams.
“I don’t think there’s just one face of the NBA,” Warriors guard Klay Thompson said. «I think there are several faces for being a league of stars. But I think it’s easier for the average fan to relate to Steph (Curry).”
Despite the rivalry, both players share several similarities such as being already high in the NBA, they make their teammates better, they can win a game at any time and they were born in the same city, Akron (Ohio), and in the same hospital.
However, their sporting careers have gone down very different paths, while James was always the child prodigy and number one from his childhood, adolescence and first selection in the 2004 college draft, as well as joining the legendary Bill Russell with six Finals of consecutive NBA seasons, Curry had to come from the bottom to the top.
The Warriors star, son of former NBA player Dell Curry, always lived in abundance having a millionaire father who played 16 years as a professional, but at the same time also absorbed all his experience and advice.
It did not affect him that because he was not too tall the best universities let him pass and when he arrived in the university draw in 2010 he had to wait until number seven to be chosen, since the experts were not sure if he had the physicality and speed to play in the NBA.
The rest is history and what Curry achieved was great, who this season helped the Warriors establish the best record in the league with 73 wins, and his style of play is copied by all the children in the world.
Now Curry’s great challenge and dream is to get the second straight title for the Warriors, while James, who continues to insist that “he is blessed”, is to get Cleveland to end a 52-year drought without a national championship title within of professional sports.EFE

You can also read:  Heat to celebrate Wade with three days of tributes