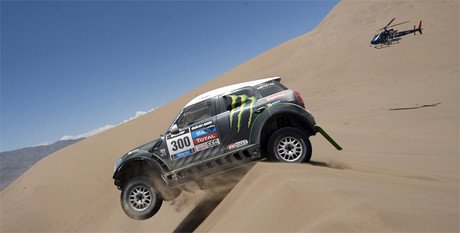 The Dakar 2015 will cross Chile, Bolivia and Argentina for the second year in a row on a route that will feature three “marathon” stages for the first time for the three motorcycle, car and truck disciplines, the organizers announced today. The “marathon days” imply that the pilots cannot count on outside technical assistance and can only help each other, which will abound in the “uncertainty of the competition”, explained today in Paris the director of the Dakar, Étienne Lavigne, during the presentation Of the test.
The competition will start on January 4 from the Casa Rosada, headquarters of the Argentine Government, and will end in the same place 13 days later, on January 17, at which time the vehicles will travel an area of ​​9,000 kilometers.
Lavigne specified that the exact itinerary, as well as the number of participants, will be finalized in the coming months and explained that Bolivia will host four stages, Chile six, including the two rest (January 10 and 12) in Iquique, and Argentina three.
In its 14 days, the rally will draw on the map of South America a route in the form of a “loop” that will link Buenos Aires with Iquique, in the north of Chile, and again with Buenos Aires, the director added.
Lavigne also celebrated the “Latin accent” of the rally, increasingly marked not only by the setting in which it takes place, but also by the number of South American drivers, three times higher in 2014 than the 40 who participated in the 2009 edition, the first in Latin America.
The success of the competition over the last seven years, he said, is due to the “fidelity” of Argentina and Chile, “which have allowed us to explore the Atacama desert and the Andes mountain range.” edition- and the «dedication and kindness» of Bolivia.
A few words underlined by the Chilean Sports Secretary, Nicol Saez, who referred, in statements to Efe, to the “mutual benefit” that arises from the relationship between the Dakar and his country.
“More than 103 million people since 2009 have sought information on the Chilean territories through which the Dakar passes (…) This is an incredible source of publicity,” he commented.
“In return, the test has the Atacama desert, one of the driest on the planet and which has already become an essential part of the competition,” he added.
The Chilean official also emphasized the six days and seven nights of camping that her country contributes, which make Chile the busiest region of this edition.
The presentation ceremony was also attended by the Argentine Minister of Tourism, Enrique Meyer, and the Minister of the Presidency of Bolivia, Juan Ramón Quintana, who highlighted the collective “feeling of festivity” that the test awakens in his country.
The Dakar, he explained to Efe, serves as “an escape valve to catalyze the emotions of the people,” and for Bolivia it is very important “to be able to participate in this dream.”
“Bolivia is not part of the major international sports leagues, and this test replaces our expectations of competition,” added Quintana.
For his part, Enrique Meyer defined the communion between that race and the region as a “perfect marriage.”
“The Dakar is different since it has been held in our continent, there has been a before and after since it is no longer competing in Africa,” commented the Argentine minister.
According to the organization’s data, the test generated in 2014 a total of 252 million dollars (about 182.3 million euros) among the three participating countries, and had a following on social networks of 1.2 million people .
A championship, that of 2014, which ended with the victories of the Spanish Nani Roma and Marc Coma in cars and motorcycles, respectively, and with the triumph in a quadricycle of the Chilean Ignacio Casale.
The presentation of this new edition closed on the Champs-Élysées with the launch of the Peugeot team, which resumed its participation in the Dakar with the signing of the Spanish Carlos Sainz, also present at the gala.
The Madrid driver, who arrived driving the Peugeot with which the French firm won the title in 1987, appealed in French to the “ability” and “passion” of the team and was sure of the good results, “something to what we have already started to work, “he commented. EFE

You can also read:  Vettel regrets the few laps in Jerez