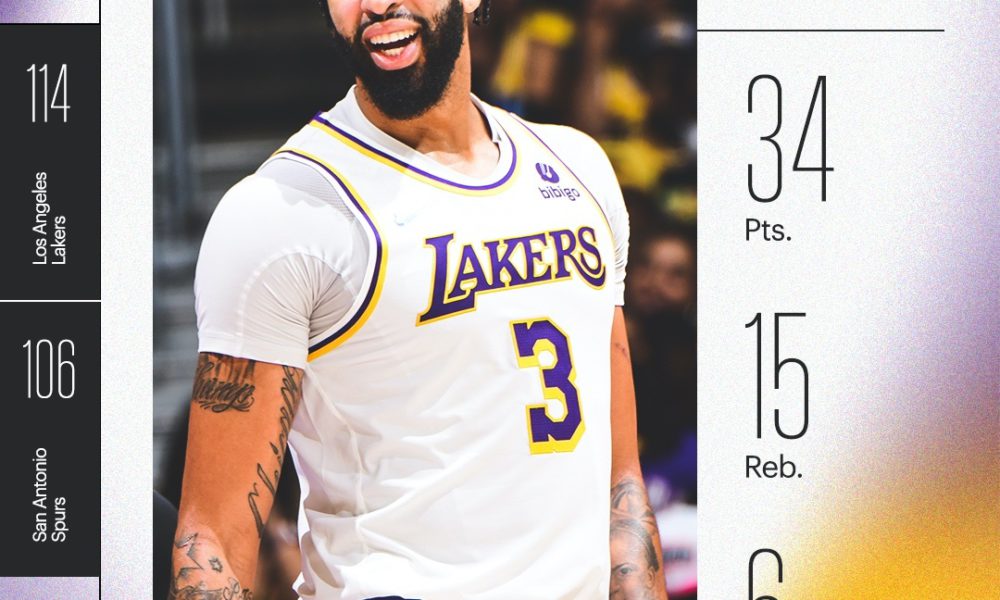 The Los Angeles Lakers rallied on Sunday with a 114-106 win over the San Antonio Spurs at the hands of an imperial Anthony Davis while the Golden State Warriors, the best team of the NBA season, stumbled against the Charlotte Hornets.

Less than 24 hours after their humiliating loss to the Timberwolves, the Lakers reacted thanks to Davis’ display, who had 34 points, 15 rebounds, 6 assists, 2 steals and a block.

In a frantic start, Davis had 19 points in the first quarter and his teammates were right this time from the line of three.

Wayne Ellington made 5 triples and Russell Westbrook another 3, to which he added a personal count of 14 points and 11 rebounds.

San Antonio, with the loss of its starting center, Jakob Poeltl, was unable to stop a hyperactive Davis.

“I wanted to go out there and dominate the game and do everything possible to get the team going,” Davis said.

The Lakers entered the fourth quarter with an 11-point lead that did not prevent them from struggling down the stretch.

In the midst of an Los Angeles offensive blackout, the Spurs came within two points (105-103) with just two and a half minutes to play.

Young Talen Horton-Tucker, who made his season debut after surgery on his right thumb, gave the Lakers air by scoring a layup and veteran Carmelo Anthony nailed a triple that sealed the home win.

“One day at a time, that’s all I can tell you,” Russell Westbrook said when asked if this version of the Lakers is close to who they want to be.

The Los Angeles franchise thus adds its third victory in the six games played without LeBron James, who could return to the team in the next few days after overcoming an abdominal injury.

The Los Angeles team occupies the seventh position in the Western Conference with 8 wins and 6 losses while the Spurs are in thirteenth place (4-9).

The Golden State Warriors, the best team in this season start (11-2), fell 106-102 on the court to the Charlotte Hornets in a generational duel between LaMelo Ball and Steph Curry, two of the most spectacular point guards in the NBA. .

You can also read:  Pau Gasol tops historical list of 10 Spanish players in the NBA

Curry had 24 points and 10 assists but was unusually off the mark on the pitch, going 7-22.

The point guard, who is dazzling in this return to the Warriors elite, did drop some amazing actions like a 3-pointer from near midfield late in the third quarter.

The victory, however, fell on the side of the Hornets, who have returned to the victory path led by LaMelo Ball, who finished with 21 points, 7 rebounds and 5 assists.

The Milwaukee Bucks fell out of the playoff positions with their resounding 120-100 loss to the also disappointing Atlanta Hawks.

The Hawks thus broke a six-game losing streak at the expense of the reigning champions, who fell to eleventh in the East.

The point guard Trae Young took his particular revenge for the elimination in the last conference final reaching 42 points, 8 triples and 10 assists.

Greek Giannis Antetokounmpo had 26 points and 5 rebounds for the Bucks in a mediocre 9/21 shooting from the field.

In Denver, the Nuggets defeated the Portland Trail Blazers 124-95 with 28 points, 9 rebounds and 9 assists from Nikola Jokic, the league’s MVP (Most Valuable Player).

After a game out of the rotation, Argentine guard Facundo Campazzo had his best performance of the season with 13 points and 4 assists in 22 minutes.

For their part, the Brooklyn Nets easily beat the Oklahoma City Thunder 120-96 with 33 points from Kevin Durant and 29 from Australian Patty Mills.

Results of Sunday’s day in the NBA: