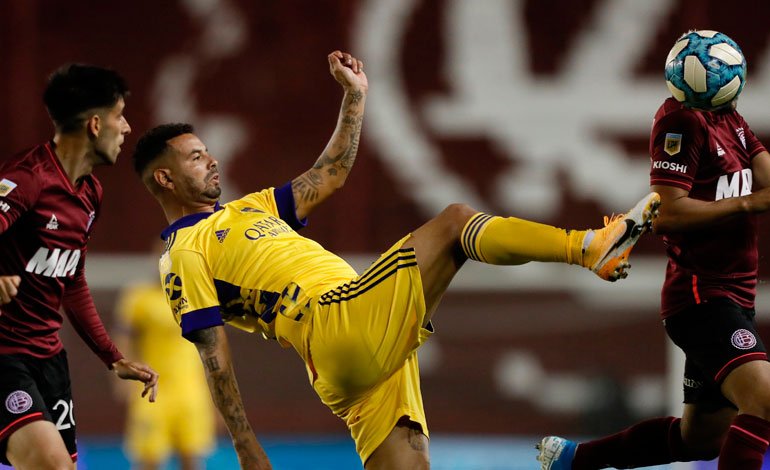 Boca Juniors won 2-1 on their visit to Lanús, in one of the matches on the first date of the Argentine Professional Soccer League Cup, on a day marked by the postponement of the match that River Plate was to play, in the midst of an institutional controversy.

In the south of Buenos Aires, the Auriazul team got three hard-earned and valuable points against the maroon team, with goals from Carlos Tévez (18) and Ramón «Wanchope» Abila (56), while José Sand (24) discounted for Lanús, a goal validated despite being marked with the right fist, in a gross error by referee Fernando Rapallini.

With a good part of its starters, Boca took the lead when Tévez pushed the ball into the net after an assist from Colombian Edwin Cardona, but Lanús immediately suffered the equality, and recovered in the second half, with Abila’s goal, who took advantage of the rebound given by goalkeeper Morales after a powerful right hand from Cardona.

In this way, the current Argentine soccer champion started his participation in the new local tournament on the right foot, beyond the fact that his main objective is the Copa Libertadores, with the round of 16 that he will play in three weeks against the Brazilian Inter de Porto Alegre.

«The team gets used to all situations, we started suffering and then we corrected it. The Argentine tournament is tough. We created goal situations and we were able to define it much earlier. Boca is a team that generates a lot, that’s the most important thing, “assessed coach Miguel Ángel Russo.

On the other hand, Lanús will risk his luck in the South American Cup on Wednesday, when he visits Sao Paulo in Brazil, whom he beat in the first leg (3-2), in a revenge duel for the second phase.

The controversy of the day was in the suspension of the meeting between River and Banfield, scheduled for Sunday but postponed to Tuesday night, due to the disagreement between the Professional League, which requires the red band club to play in an authorized stadium, and River, who intends to be local at his training camp in Ezeiza (35 km south of Buenos Aires).

River began a couple of months ago the renovations in the playing field of the Monumental stadium, which will be unused until next February, and for this contest, which is played without an audience, they made improvements to their practice ground, with the intention of playing the matches of the local tournament there, while for the Copa Libertadores it uses the Independiente field.

You can also read:  Suspects of Maradona's death will begin to be investigated

However, from the Professional League, organizer of the tournament, they did not endorse this decision and summoned River to play in an authorized stadium, a situation that forced the decision to be postponed this Saturday, although the ‘millionaire’ club insists on wanting to play in its own property.

Also on Saturday, Argentinos Juniors and San Lorenzo did not take advantage of a tight and lackluster match, and tied goalless.

Earlier, Vélez and Huracán equaled 1-1, with scores from Ricardo «Ricky» Álvarez (55) for the ‘fortineros’, and Norberto Briasco (36) for the ‘Globo’, and in Mar del Plata, Aldosivi and Estudiantes points were shared in a boring 0-0.

On his side, Talleres defeated Newell’s 3-1, with goals from Nahuel Tenaglia (52), Tomás Pochettino (77) and Colombian Diego Valoyes (84), while Ignacio Scocco (76) discounted for Rosario.

You can also read:  Zidane assures that he will not leave Madrid and asks for respect

On Sunday it will be the turn of Defense and Justice-Colón, Unión-Arsenal, Racing-Atlético Tucumán, and Central Córdoba-Independiente, and the closing will be on Monday with Rosario Central-Godoy Cruz.

In the return to activity, the Argentine tournament disputes a cup with 24 teams divided into six zones of 4 teams and six initial dates, with a second section in which the two best teams in each group will go to a championship round, and the The remaining 12 will qualify for a complement round.

In this second phase, the 12 teams from the championship round will be divided into two zones of six, with a single round of five dates, and the best two from each group will advance to a final to be played on January 16 in a single match, with a place in the Copa Libertadores-2021 at stake.

These are the results of the first date of the League Cup: