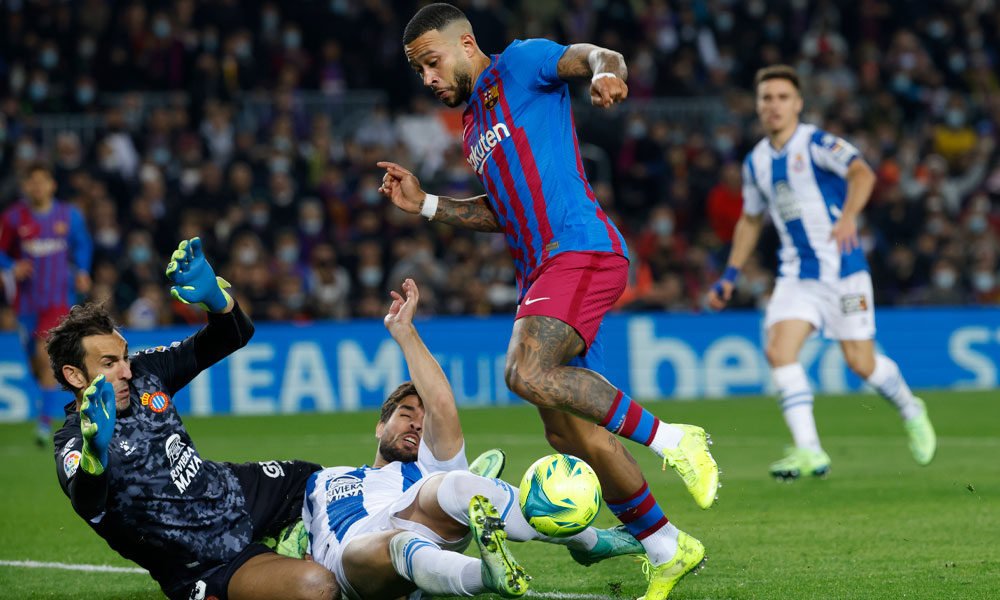 Barça did not shine, but the staging of Xavi Hernández’s first game on the bench explained a change in the way of doing and an increase in the mood of the Barça team, which was confirmed with the 1-0 victory against Espanyol at the Camp Nou with a Memphis goal from Depay from a penalty right after the second half began.

If the Guardiola era began with a 1-0 defeat against Numancia, Xavi’s has done so with a triumph in a Barcelona derby in which there were some first indications of what this Barça intends to do: dominate the rival with the possession of the ball, press high and increase the intensity of the game.

The first scoring opportunity of the game came with a Memphis volley from the edge of the area in the 3 minute that Diego López caught without too much trouble. The control of the ball was completely from the beginning of Barça, who moved it from one side to the other against a closed Espanyol, imposing the way of understanding Xavi’s football, which was chanted by the Camp Nou on several occasions.

Another concept that the Barça team put into practice was high pressure, exemplified by Nico González in the 15th minute when he advanced to David López in the front of the Espanyol area when receiving a loose pass from Diego López. But the youth squad lost the ball too long and the blue and white goalkeeper was able to solve the urgency.

You can also read:  Cristiano Ronaldo would be negotiating with Juventus his contract extension

Xavi announced a surprise at the pre-match press conference and did not lie. The subsidiary player Ilias Akhomach was chosen from the start at the far right due to the multiple casualties in attack and thus became the tenth youngest player to debut in the history of Barça, with 17 years, 7 months and 4 days. At half-time he was replaced by another end of the subsidiary, Ez Abde, who had already made his debut against Celta de Vigo.

On the other side of the attack, they were accompanied by Gavi, also 17, towards whom the weight of the game fell during the first bars of the match, associating with a particularly offensive Jordi Alba. The owner of the center of the field was another young man, Nico González, who with his verticality led the visiting wall, installed before Diego López, because of 79% of the possession of the ball that Barça accumulated in the 30th minute.

For its part, Espanyol tried to do damage through timid counterattacks commanded by Sergi Darder, who looked for the references of Raúl de Tomás and Embarba, two islands that failed to hurt Ter Stegen until the first one, just before the break, was undone. of Mingueza on the left wing and his shot, which hit Piqué, made a parable that almost surprised the German goalkeeper.

In the first half, Barça failed to turn their overwhelming dominance into a constant danger for Espanyol. His best chance was a shot by Sergio Busquets from the edge of the area after half an hour of play that Diego López destroyed.

You can also read:  Seville continues without winning in Champions

But everything changed as soon as the second part began. When the first minute of the game had not yet been played, Gavi filtered a ball into the area for Memphis, which, in the referee’s opinion, was knocked down by Cabrera when he was already facing Diego López. The same Dutch striker was in charge of turning the penalty into a goal, much protested by the Espanyol players, with a powerful shot.

The goal changed the dynamics of the game by forcing Espanyol to advance lines and that was taken advantage of by a brave Ez Abde to generate danger with his great ability to overflow and his ease in finding the back of the rival defense. An excellent deep pass from Busquets in the 60th minute left him alone against Diego López, who he overcame with the ball. But Pedrosa, very attentive, avoided both at the last moment.

In the 67th minute, Espanyol finally managed to generate a dangerous counterattack. Raúl de Tomás was faster than Piqué and Mingueza to be alone against Ter Stegen, but his shot went slightly off the right side of the goal.

Landry Dimata had in his head the best opportunity of the match for Espanyol in the 83rd minute. When the visitors were already calling the tie, the Belgian striker sent his shot from the front of the small area to the left of a Ter Stegen that nothing could have been do if the ball had gone between the three sticks.

On the next play, another header, by RAúl de Tomás, was repelled by a post.

Despite this final Blue and White siege, for the fourteenth consecutive game Barça beat Espanyol at the Camp Nou and the balance in this stretch of matches is already 41 local goals and only 3 visitors. The Xavi era begins with joy for Barcelona fans.