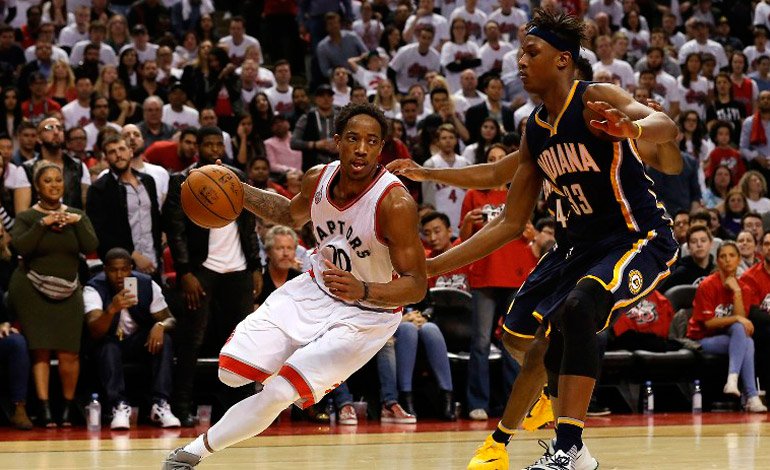 Shooting guard DeMar DeRozan still didn’t have his best touch, but in the end he provided the decisive points that allowed the Toronto Raptors to beat the Indiana Pacers 89-84 in Game 7 of the Conference’s first-round playoff series. This one they won 4-3.
The victory qualified the Raptors to the semifinals that they will play starting Tuesday against the Miami Heat, who eliminated the Charlotte Hornets in the first round, also 4-3.
DeRozan had 30 points after missing 22 of 32 shots from the field, including 4 of 5 3-point attempts, but was perfect (9-9) from the free throw line.
The Raptors’ star shooting guard grabbed five rebounds, which were all defensive, gave two assists, recovered three balls, lost one and made three blocks.
While the Lithuanian center Jonas Valanciunas got a double-double of 15 points and 10 rebounds, which left him as the best in the inside game.
Rookie shooting guard Norman Powell reached 13 points as a reserve and became the sixth man on the team, always contributing the decisive goals that helped the Raptors to obtain the victory, which they could not secure until the last seconds of the game.
Point guard Kyle Lowre contributed 11 points and nine assists and power forward Patrick Patterson, who started in place of Argentine veteran Luis Scola, who did not see action, had the same goals as his teammate, and grabbed seven rebounds that helped the Raptors to win their first best-of-seven series since coming to the NBA.
The Raptors had won their first five-game playoff series in 2001 when they faced the New York Knicks and ended the longest streak by an NBA team without winning a playoff series.
Despite the victory, the Raptors, who entered the fourth quarter with a 14-point lead, with one minute and 50 seconds left, allowed the Pacers to fall just three behind on the scoreboard (85-82).
Lowry responded with a penetration (87-82), but two personal shots by forward Paul George again left the game three apart (87-84), with the Pacers having possession when DeRozan missed a triple attempt and when there were 26.9 seconds left.
Indiana could not score again in the end and De Rozan did with two free throws that ensured the victory full of suspense and drama, especially for the Toronto Raptors fans.
George was once again the leader of the Pacers by achieving a double-double of 26 points and 12 rebounds that did not prevent the defeat of the Indiana team.
Although on an individual level he made history after becoming the player who has scored the most points in a playoff series by overcoming the 181 barrier achieved by former shooting guard Reggie Miller during the 1995 Eastern Conference finals. EFE

You can also read:  Another Doncic exhibit; Heat, Raptors and Sixers, undefeated at home