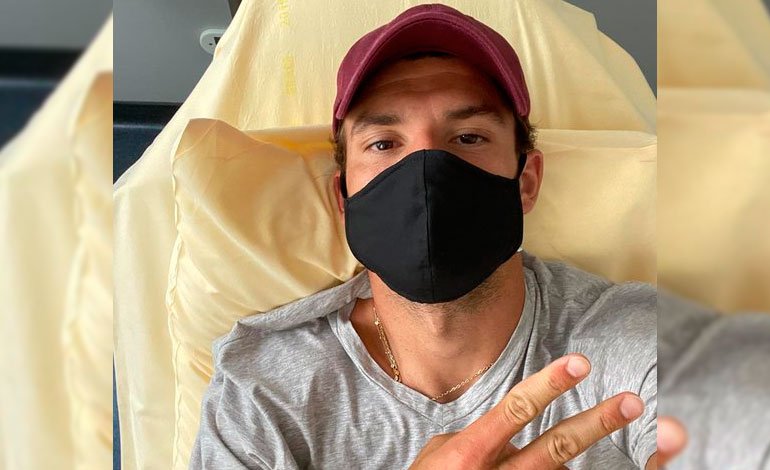 The Bulgarian tennis player Grigor Dimitrov, number 19 in the world ranking, announced this Sunday that he has contracted the new coronavirus, a few days after having participated in the Adria Tour tournament promoted by the number one of the ATP, Novak Djokovic, and with the presence of others figures of his sport.

Dimitrov played last weekend in the Belgrade stage and then in Zadar (Croatia), where he continued that competition.

“I want to announce to my fans and friends that I have tested positive for COVID-19 upon my return to Monaco,” Dimitrov wrote on his Instagram profile.

“I want to make sure that everyone who has been in contact with me in the last days takes the test and takes the necessary precautions. I’m sorry if I caused problems, ”he added.

You can also read:  Thiem eliminates Federer and will play the semis against Djokovic

As a direct consequence of the announcement, the Adria Tour decided to cancel the duel scheduled this Sunday between Djokovic and Russian Andrey Rublev (14th in the world), the end of the Zadar stage.

It’s the best possible decision. We must ensure the safety of all participants. People who have been in contact with Grigor are going to be tested, “the director of the Croatian sleeve of the tournament, former tennis player Goran Ivanisevic, promised to the press in his country.

On Sunday June 14, Dimitrov had participated in Belgrade in the first stage of the Adria Tour, an exhibition tournament organized by Djokovic and which also has charitable purposes, in front of full stands and where few spectators wore a mask.

You can also read:  Nadal wins without forcing Popyrin in the first round of Roland Garros

In addition to Dimitrov and Djokovic, Austrian Dominic Thiem (3rd in the world), German Alexander Zverev (17th) and former Serbian world number one Jelena Jankovic also participated in that tournament in the Serbian capital.

Dimitrov, a former world number 3 and 2017 season-ending Masters champion, retired on the Zadar stage after losing to local Borna Coric, explaining that he was unwell.

Zverev and former Croatian US Open champion Marin Cilic were also at that time from Zadar.

Djordje Djokovic, brother of the world number one and director of the Adria Tour, reacted this Sunday to the news of Dimitrov’s COVID-19 positive.

You can also read:  Medvedev, eliminated first-time in Hamburg

‘Anyone who has been in contact with him will be tested. Sorry, we didn’t want any risk, ”he told the Sportske Novosti newspaper’s web edition.

As he stressed, both he and his brother were disappointed at the news.

“We follow all the measures prescribed by the governments of Serbia and Croatia,” he stressed.

Djokovic had responded in recent days to criticism about the little physical distancing kept during the tournament, alluding to the “rather decent” balance of the Balkan countries in their fight against COVID-19, with data on infections and distant deaths of those in Western European countries, most affected by the disease. AFp (HN)