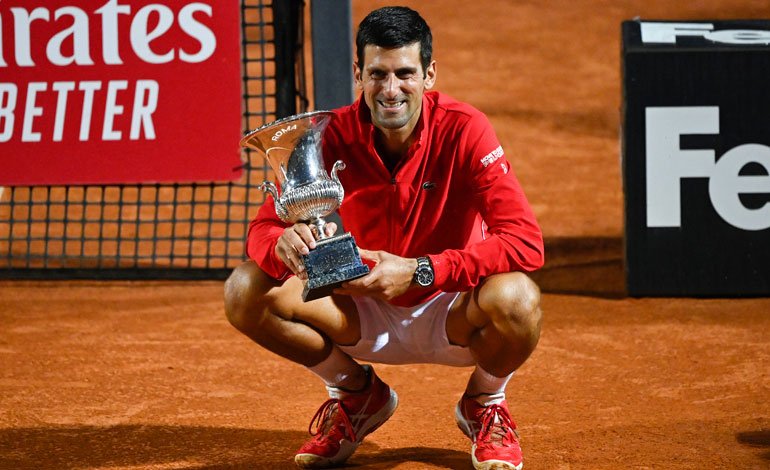 Serbian Novak Djokovic, number one in the world rankings, won the Masters 1000 in Rome for the fifth time by defeating Argentine Diego Schwartzman (7-5, 6-3) in the final.

Two weeks after his disqualification from the US Open for hitting a chair umpire with a ball, his only loss in 2020, the Serbian won his 36th Masters 1000 title, a record, beating Rafael Nadal (35). less than a month after winning Cincinatti’s, which was played in New York.

Despite the absence of Nadal this year against him in the last game, Djokovic did not trust Schwartzman (15th world player), who had defeated the Spanish in the quarterfinals, and against whom he had fought a lot last year in the semifinals in the Foro Italico.

The fears were confirmed early in the game: in a light rain, Djokovic was imprecise and looking to build on his first serve.

– Good start for the Argentine –

But Djokovic eventually ran into each other and tried to make the little Argentine (1.70 m) run, who had spent more than three hours on the track on Saturday in the semifinals against Canadian Denis Shapovalov. The world number one ended up winning the sleeve at the end, making use of his experience (7-5).

But it was clearly not Djokovic’s best day, as several failed drops showed, which allowed the Argentine, very combative as always, despite fatigue, to continue believing in winning the second set.

But as almost always happens when it comes to the decisive moments, “Djoko” made the difference by achieving a decisive break to go 4-3, to set course for the final victory (6-3).

«It has been a good week, even though I have not played my best tennis. But I’m satisfied, “said the Serbian, who will now aspire to win his second Roland-Garros, which begins in less than a week.

You can also read:  Halep tests positive for coronavirus

Despite his victory in Rome, for the Serbian Rafael Nadal remains “the number one favorite” at Roland-Garros, although his defeat in Italy has shown “that he can be beaten on clay”.

Less than a week before Roland-Garros, Nadal, with his twelve victories on Parisian clay, “remains the one with the best chances,” said the winner of the Masters 1000 in Rome.

Even though he lost this week, he is the number one favorite. At the level of its results, you can not put anyone at its height, “he estimated.

“But Diego (Schwartzman) showed that Nadal can be defeated on clay,” he added, regarding the Argentine, who had beaten the Spanish in the quarterfinals in Rome.

In addition, Roland-Garros takes place in the autumn due to the coronavirus pandemic, with different playing conditions, with perhaps rain, wet terrain, less high rebounds, he explained.

You can also read:  Muguruza defeats Serena Williams, who retires, and goes to the round of 16

Nadal “prefers high rebounds, that it’s hot, that the ball goes fast,” said “Nole.” “Let’s see, but it will be interesting,” concluded the Serbian.

In the women’s tournament, the Romanian Simona Halep, first seeded, won the title after the abandonment in the second set of the final (with 6-0 and 2-1 in favor of the winner) of the defender of the tournament, the Czech Karolina Pliskova (N.2).

After two lost finals in 2017 and 2018, Halep won for the first time on Roman clay, thus achieving his third consecutive title after Dubai and Prague, less than a week before the start of Roland Garros, postponed to September due to the coronavirus pandemic. .

The Czech player had to resign due to a pain in her left thigh.

“I know you didn’t want to end up like this, but you played very well this week. Get well and good luck for Roland Garros, “Halep told the Czech. AFP (HN).