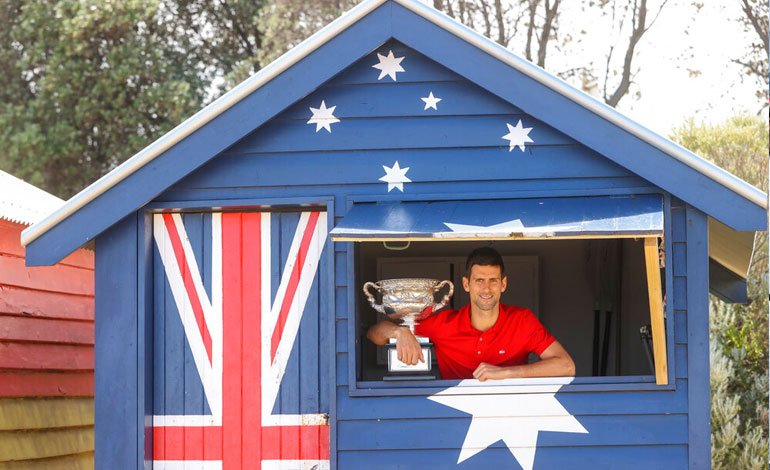 It didn’t take long for Novak Djokovic to honestly state his intentions – from now on, all he cares about is catching up with Roger Federer and Rafael Nadal on the all-time Grand Slams table.

Nothing to do with winning second-level tournaments or keep playing to stay number 1 in the world.

The 33-year-old Serb has a single essential goal. He wants to increase his collection of 18 championships at the big events – he just reached the figure with his ninth crown at the Australian Open on Sunday – and will not be satisfied until he leaves behind Federer and Nadal, who share the men’s record with 20. .

“They have already made history. They have made a tremendous mark on our sport, ”said Djokovic. What if I think about winning more Slams and breaking records? Of course. And most of my attention and energy from this day until I retire from tennis will be focused on the majors, trying to win more majors trophies. “

All of this is fine. There is no need to pretend.

And there is no requirement that you must compete or appear in places except where you really want to be. All that matters for Djokovic, from a tennis point of view, is accumulating Slams, and playing less frequently will allow him to dose his physique, something justified in someone who had surgery on his right elbow three years ago and was about to see derailed. his just finished Australian Open due to a torn abdominal muscle.

You can also read:  Maria Sharapova will not participate in the Doha Open

It is something that is not different from what Federer himself or Serena Williams, owner of 23 Slam crowns, have done in recent years.

“I think 99.9% of players – guys wielding a racket – start dreaming what they want to achieve. It’s a Grand Slam, to win a major, ”explained Djokovic after his overwhelming performance to beat Daniil Medvedev 7-5, 6-2, 6-2 in the final at Melbourne Park.

“I don’t feel old or tired or anything like that,” he said. “But I understand that, biologically and realistically, things are different than they were 10 years ago for me.”

To this must be added that his most recent consecration at the Australian Open ensured him to remain at the top of the ATP ranking until March 8.

You can also read:  Djokovic aims to regain world number 1

It will be when he reaches 311 weeks as number 1 in his career, one more than Federer’s total, another goal in Djokovic’s sights.

“When you go for number 1 in the ranking, you have to play throughout the season, and you have to play well; play in all tournaments. My goals will adapt and change a bit, which means I will have to adjust my schedule, ”said Djokovic. I am going to have an opportunity that, as a father and husband, I am going to enjoy. “

One part of the calculation is that no one knows, of course, whether Federer, who has not played for more than a year after being operated on twice on the knee and will turn 40 in August, or Nadal, 34, will continue to win more. majors – or how many more.

It goes without saying that until Federer, Nadal and Djokovic appeared on the scene, no other man had reached Pete Sampras’ 14 Grand Slam titles. And here we are, 20 years after Sampras retired, and he’s been overtaken by a trio of men, and by far.

You can also read:  Nadal prepares the fast track season with Dimitrov in Manacor

“We’re talking about tennis cyborgs, in the best sense of the word,” Medvedev said, referring to the longevity and unprecedented success of the so-called Big Three. “They are simply incredible”

Djokovic’s coach Goran Ivanisevic has predicted that Nadal will clinch “one or two more” championships at the French Open, where he caught the 13th last October.

That is the only instance of a man with more singles titles in a majors than Djokovic’s total in Australia. Federer’s top is his eight at Wimbledon.

All have completed the Grand Slams crown collection.

“Roger and Rafa inspire me. It is something that I have mentioned above. And I repeat it. As long as they continue, I will continue, “said Djokovic. “In a way, it’s like a race of who will play the most tennis and, I guess, who will win the most. It is a competition between us in all areas. But I think that’s the particular reason why we are what we are, we motivate ourselves and push ourselves to the limit. AP (HN).